The Role of the Orchestra Librarian as Music Copyist 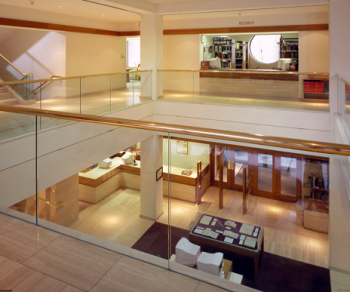 Ron Krentzman is my own orchestra librarian in the Harford Symphony (as well as our Assistant Principal Clarinetist for many years), and I am just in awe of Ron’s knowledge of publications, editions, composers, etc. Before becoming our librarian, Ran was a music copyist (by hand) and worked for many famous composers, including Lenny Bernstein. He gives us his take on merging (or not) the two jobs.
And then Karen Schnackenberg of the Dallas Symphony adds her sense of how this works in a major orchestra. An important read for any orchestra librarian who’s been asked to “add a few measures.”

Ron: As orchestra librarians, we are expected to deal with printed music in a variety of ways. We correct errors, fix bad page turns, mark in bowings and perform many other tasks.
But what if the printed music doesn’t exist? Or if it is the wrong key? Suppose the music is illegible and the musicians refuse to perform from it? Is it the librarian’s job to actually produce the music as well as distribute, catalog and edit it?
Presently, most music notation is produced using a computer application, such as Finale or Sibelius. It is beyond the scope of this article to determine which of these programs might be more useful to the librarian, but suffice it to say that either of these will do the job. Finale might have a slight edge in notating avant-garde music, which relies heavily on graphic notation.
Other notation programs do exist, but the above two are the most popular. There exists a program named Score that many large publishers use, but it is a rather unwieldy program that is completely text-command based and has not been updated in almost 20 years. It does not run on any modern operating system. Having said that, Score is perhaps the most flexible of the three and can produce beautiful output, which is probably why so many publishers continue to use it.
With any of these applications, it is never as easy as inputting all the notes and allowing the computer to take care of the formatting. Music engraving is an art, like music performance, and there are many opinions as to what constitutes a well-engraved page of music. Just because a person is able to read music does not automatically mean they know exactly how printed music should look. There are many factors to consider, such as horizontal and vertical spacing, page layout, instrumental cues and such.
While there is no definitive text for learning all the subtleties on engraving, there are several books that engravers consult. The granddaddy of these is Teach Yourself the Art of Music Engraving by Ted Ross. There are also several excellent books on music notation, such as those by Kurt Stone and Gardner Read. Another wonderful source, if you can find it, is the style handbook produced by G. Schirmer. Of course this is slanted toward their house style, but is still a helpful resource.
The whole issue of engraving in the orchestra library can be a thorny one, especially if the librarian is a professional copyist as well. It is a good idea for the librarian and management to discuss this and agree upon terms before a large project presents itself, so that the boundaries are clear when going from library work to copyist work. While the librarian can be expected to produce a few inserts or transpose a Bass Clarinet part from A to B-flat, whether by hand or computer, extracting parts for a twenty minute orchestral work would call for a separate agreement and extra pay.
Think of it as a double: a player in the orchestra would be paid an additional fee for performing on an auxiliary instrument. Since a librarian is not, by definition, a copyist, s/he would be performing an additional musical service by working as one.
Karen: After reading Ron Krentzman’s excellent and insightful comments about librarians doing copyist work, I have some other thoughts to add. As he rightly points out, a librarian is not a copyist, although s/he might have very good skills in that regard. Many librarians are specialized in various musical skills, just as are many players. Some might be players themselves (and, so, when performing with the orchestra, would be paid extra for that work). Others might be arrangers or copyists. Of course, it is difficult to separate the whole of a person from the sum of their individual experience and skills, but lines do have to be drawn about how far to employ those specialized skills in a job that doesn’t necessarily include them. It is easy to presume that because someone has a great set of extra skills, those should be automatically employed in their daily work. That being said, different library positions do sometimes require a higher level of expertise in various areas.
One of the favorite phrases of our colleague Larry Tarlow, Principal Librarian of the New York Philharmonic, is, “The computer has turned a bad copyist with bad handwriting into a bad copyist with good handwriting.” His point is that these days the tendency is to assume all hand-copied manuscript is inherently “bad” but a computer-engraved part is inherently “good.” Nothing could be further from the truth. Some of the most beautiful parts I have ever seen were done by hand copyists. It is the craft and art of the copyist, whatever medium s/he uses, that creates excellent parts, not the medium itself.
Recently, in the Dallas Symphony Orchestra library, we experimented with an open source engraving software program called LilyPond. The goal of the creators of this software was to make computerized music more beautiful than the popular commercial programs such as Finale. Their theory is that notation which is truly pleasing to the eye of the performer actually makes reading the music easier and, therefore, lends itself to better performances. The notation in LilyPond is entered via code done with key strokes rather than selecting notes, rhythms, etc. with a mouse. Our Assistant Librarian, Melissa Rogers, taught it to herself in one day, and the final product – in this case, a percussion part – was very nice.