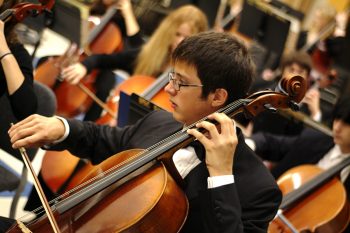 In this article, composer Dan Visconti presents a compelling case for writing for youth orchestras. Particularly relevant to younger composers, Dan’s article contains many insightful points that force music creators to seriously consider the many opportunities that youth orchestras may offer. In an age of innovation and self-promotion, it seems crucial for younger writers to use creative thinking to identify opportunities which may be outside of the popular and well-worn path. Dan’s article is simply a must read for young composers. Thanks to NewMusicBox.org for letting us share this with you.

By Dan Visconti
Reprinted with permission from Newmusicbox.org
View the original article posting here: http://newmusicbox.org/chatter/chatter.nmbx?id=6127
While many composers dream for a chance to hear their music played by a symphony orchestra, it remains an unfortunate reality that all too few will have the chance to do so. For American composers in particular, managing to get a new work for orchestral forces performed (or even read) can be a daunting task, to say the least; and while it’s true that a few major orchestras have made vigorous commissioning of new music a priority, the field has become so saturated that few organizations are motivated to take the risk of working with a neophyte. How, then, is a composer intent on gaining experience with orchestral writing to ply his or her craft?
To this end, I can’t recommend youth and school orchestras enough as potential collaborators for less-established composers hungry for experience. I make this recommendation, first of all, because it’s how I cut my own teeth, and I count my experiences composing for youth orchestras to be among those that best prepared me for making the transition from student to young professional. All together I’ve composed four works for youth orchestras: two for the Cleveland Orchestra Youth Orchestra, one for orchestra and chorus commissioned through the New York Youth Symphony’s FirstMusic program, and one for massed strings written for the Suzuki Association of America. Each of these experiences was rewarding in its own way, but I’ve tried to distill them all into some general comments:
• Unlike professional orchestras, the ultimate artistic directorship of youth orchestras usually rests squarely on the shoulders on the conductor; this means that there’s no board or artistic staff to wade through, and you might actually be able to accomplish something by meeting with the conductor—even if you don’t necessarily have any clout as a big-shot composer. In addition, many youth orchestras see experience with contemporary music as something beneficial for their members.
• Technically, many youth orchestras are on par with regional or community orchestras; in fact I recall the Cleveland Orchestra Youth Orchestra as actually sounding significantly better than the adult nonprofessional ensembles in the area. And since the young performers aren’t paid (and in many cases pay membership fees themselves), they’re all playing presumably because they want to, and in general they may be more open to trying new things than any other kind of ensemble.
• The operational schedule of most youth orchestra would seem to be ideally suited for composers. Most will put on a few concerts each year, with ample weekend rehearsals beginning at least a month or two before the next concert. When I received my second commission from the Cleveland Orchestra Youth Orchestra, I ended up composing a largely graphic score full of extended techniques that a professional orchestra never could have put together in the 25 minutes or so they would have allotted for rehearsing it; the same piece was rehearsed by the youth orchestra for about 25 minutes each weekend, with a grand total of twelve rehearsals plus sectionals. I would have never been able to attempt something so adventurous and detailed had I been composing for a major orchestra, so the idea that writing for young players would be “limiting” is hogwash—quite the contrary, I’ve found that with professional orchestras the limitations imposed by scant rehearsal time vastly outweigh any supposed benefits in the ensemble’s technical skills.
Right now as school gets underway, the youth orchestra season is just beginning and it might be time to get that old (or newly completed!) unperformed orchestra piece in shape to show to your local conductor. If you’re looking to develop skill and reputation as a budding orchestral composer, it’s probably a better plan than cold-mailing a stack of scores into the aether.
Reprinted with permission from Newmusicbox.org.
View the original article posting here: http://newmusicbox.org/chatter/chatter.nmbx?id=6127.