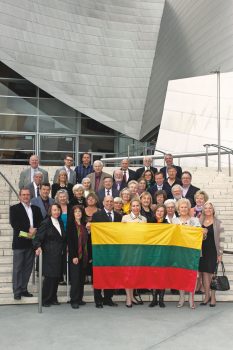 On March 1, a group of more than 30 California Lithuanians gathered at the Los Angeles Walt Disney Concert Hall for an evening of Mozart, Stravinsky and Beethoven. They unfurled a Lithuanian flag on the steps in honor of the Los Angeles Philharmonic’s recently-appointed Assistant Conductor, Lithuanian Mirga Gražinytė-Tyla. The 29-year-old conductor has impressed Los Angeles audiences and music critics since her debut concert in August 2014 at the Hollywood Bowl and continues to do so.
Alexandra Kudukis interviewed the new Maestra for Draugas News, an English-language Lithuanian newspaper.
Reprinted by permission of Draugas News.

In 2014, The Los Angeles Times wrote, “Conductor Mirga Gražinytė-Tyla is already creating a stir in the classical music world for her buoyant podium style and intense approach to demanding symphonic works.”
Mark Swed of the LA Times commented after her first LA concert, “She manipulates sounds like a sorcerer. Agree with her or not, she’s on top of everything every second and clearly thrilled to be so,” while after the March 1, 2015, concert he proclaimed, “Mirga mania can now officially begin.” 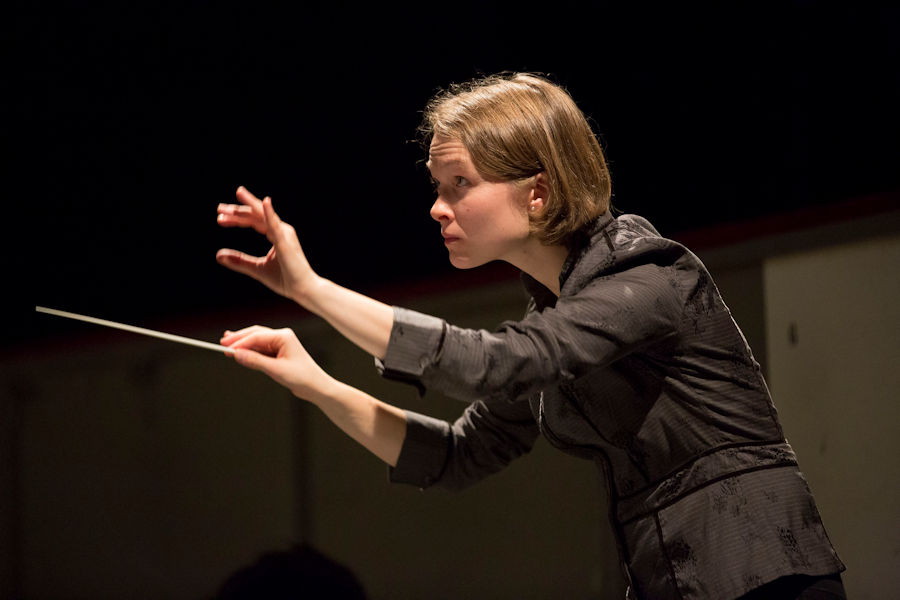 Vilnius-native Mirga Gražinytė-Tyla was born into a musical family and showed an early predilection to singing. She graduated with a Bachelor’s degree in choral and orchestral conducting  from the University of Music and Fine Arts in Graz, Austria, and then decided to concentrate wholly on the orchestra, pursuing her studies at the Music Conservatory in Zurich, Switzerland. In 2012 Ms. Gražinytė-Tyla was the winner of the prestigious Nestlé and Salzburg Festival Young Conductors award, an honor that opened doors to numerous conducting opportunities, one of which was a perk of the award — the chance to conduct the Mahler Chamber Orchestra in a symphonic concert at the Salzburger Festpiele. She has collaborated with Gidon Kremer and Kremerata Baltica, made her debut with the Wiener Kammerorchester in Vienna, and in 2013/14 was First Kappellmeister of the Opera House in Bern, Switzerland.
The Salzburg Young Conductor’s award came to the attention of the LA Philharmonic’s Music Director Gustavo Dudamel, who selected Mirga Gražinytė-Tyla as one the the orchestra’s Dudamel Fellows in 2013. He commented on the orchestra website, “When Mirga won the Salzburg Festival Young Conductors Award in 2012, I heard from many friends about this extraordinary talent from Lithuania. We invited her to Los Angeles under our conducting fellowship program and she impressed me, my colleagues in the orchestra, and everyone she came into contact with.”
In 2014 Mirga was offered the position of Assistant Conductor of the Los Angeles Philharmonic for two consecutive seasons. New offers keep rolling in: she was most recently appointed Music Director of the Salzburg Landestheater with the start of the 2015/16 season.
In between rehearsals for her March 1st concert, Mirga Gražinytė-Tyla graciously agreed to discuss her life and work with Draugas News correspondent Alexandra Kudukis.
Mirga, in 2014, you were appointed Assistant Conductor of the Los Angeles Philharmonic Orchestra. Was this a surprise for you?
The surprise was far greater in 2013, when I was invited as a Dudamel Fellow for a five-week engagement. It was a wonderful first experience and first collaboration with the orchestra. A couple of months later, after I had returned to Europe, I was offered the post of Assistant  Conductor. I couldn’t accept the position immediately because I was engaged with the Opera House in Bern, Switzerland. So, I had to defer the opportunity for a year.
You are not yet 30 years old, yet you have accomplished so much! How do you handle this?
You know, it’s a great joy to encounter such an orchestra. I’m grateful and happy that I have received such a gift. But then, sometimes I wake up in the morning with a fright — do I really know what I’m doing? After rehearsals I think: these musicians are incredible, what can I offer them? In every person’s life there are highs and lows. I worry that I don’t know enough.
When I work with an amateur or a youth orchestra, it sometimes starts out very slow. Often times the musicians are unfamiliar with the piece, everything is off. But there are many rehearsals. You work at it and work at it, and in the end, you are so gratified that collectively you have created a symphony worthy of professionals. The path from the first rehearsal to the final performance is long, even for professionals. The further you go, the more difficult it is to stop. I have become convinced that the most important thing is the process, always moving forward, not stopping, not resting on one’s laurels. There is no respite from driving toward perfection.
I watched a short video of you from 1996 on YouTube. You were a contestant in the “Song of Songs” competition on Lithuanian television. I believe you were in the fourth grade. You seemed so self-composed, standing in front of the audience with the orchestra behind you. You sang a song “Gera būtų” (It would be good to be)…
That was a poem by Sigitas Geda put to music by Anatolijus Šenderovas. It’s a beautiful song. I am grateful to my parents for preparing me to sing in that contest. I recall that there were disagreements at home. I didn’t want to participate, while my parents kept trying to convince me. But our biggest disagreements were over acting. My parents, especially my father, thought that this song required that I act the part of the character. In the beginning the character is asleep, she gradually wakes, and then she puts up a fuss. My father came up with the moves. I fought him from the very beginning. “Who needs this?” I said.  But in the end it turned out to be lots of fun.
Is that when you understood that you belong on the stage?
No, I did not have that desire then. I remember having the jitters before going on. Those were difficult minutes. But once I stepped on the stage, I felt fine. I just did what I had to do. I do remember that I decided to dedicate my life to music at the age of eleven. Up until then, I did not study music. I neither played an instrument, nor did I take any type of music classes. It seems that my parents did not want to make a musician out of me. But because both of my parents were musicians, everything at home was affected by music. I thought to myself, that if I don’t become a musician, I will be separated from life and my family. My parents were resolute to give their child a practical start in life, some pragmatic specialty that would give her a sound basis on which to stand. That is what they planned, but that is not the way it turned out.
You studied in Graz, Leipzig and Zurich. When did your love of singing turn to conducting? 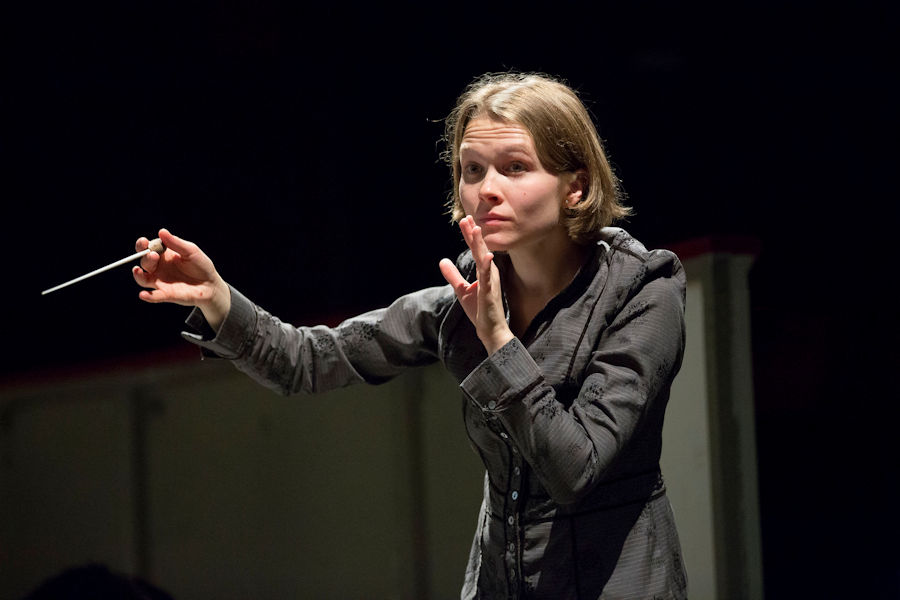