In 2009 the Spokane Symphony created an endowed chair in memory of two members of their violin section: mother/daughter Evelyn Ayer and Jane Ayer Blegen. Julie Ayer, violinist with the Minnesota Orchestra, has written a loving tribute to her mother and sister, describing their involvement with the orchestra and how the endowed chair came to be. She also gives us an overview of the history of women in North American symphony orchestras.

My mother, Evelyn Ayer, and sister, Jane Ayer Blegen, were members of the violin section of the Spokane Symphony for many years. Their careers overlapped for 12 of the 50+ years that one of them was a member of the orchestra.

Evelyn was one of the founding members of the Spokane Philharmonic, as it was known in 1945. Evelyn sat in the 4th chair of the first violins until she retired in 1984. Jane joined the Spokane Symphony in 1972, and after her mother’s retirement, she moved to the same chair her mother had occupied.

Anyone who knew them experienced their enthusiasm and love for the orchestra, and the musical family and friendships that developed over many years. They were truly peas in a pod, with similar mannerisms, appearance, sense of humor, and were even roommates on orchestra tours. 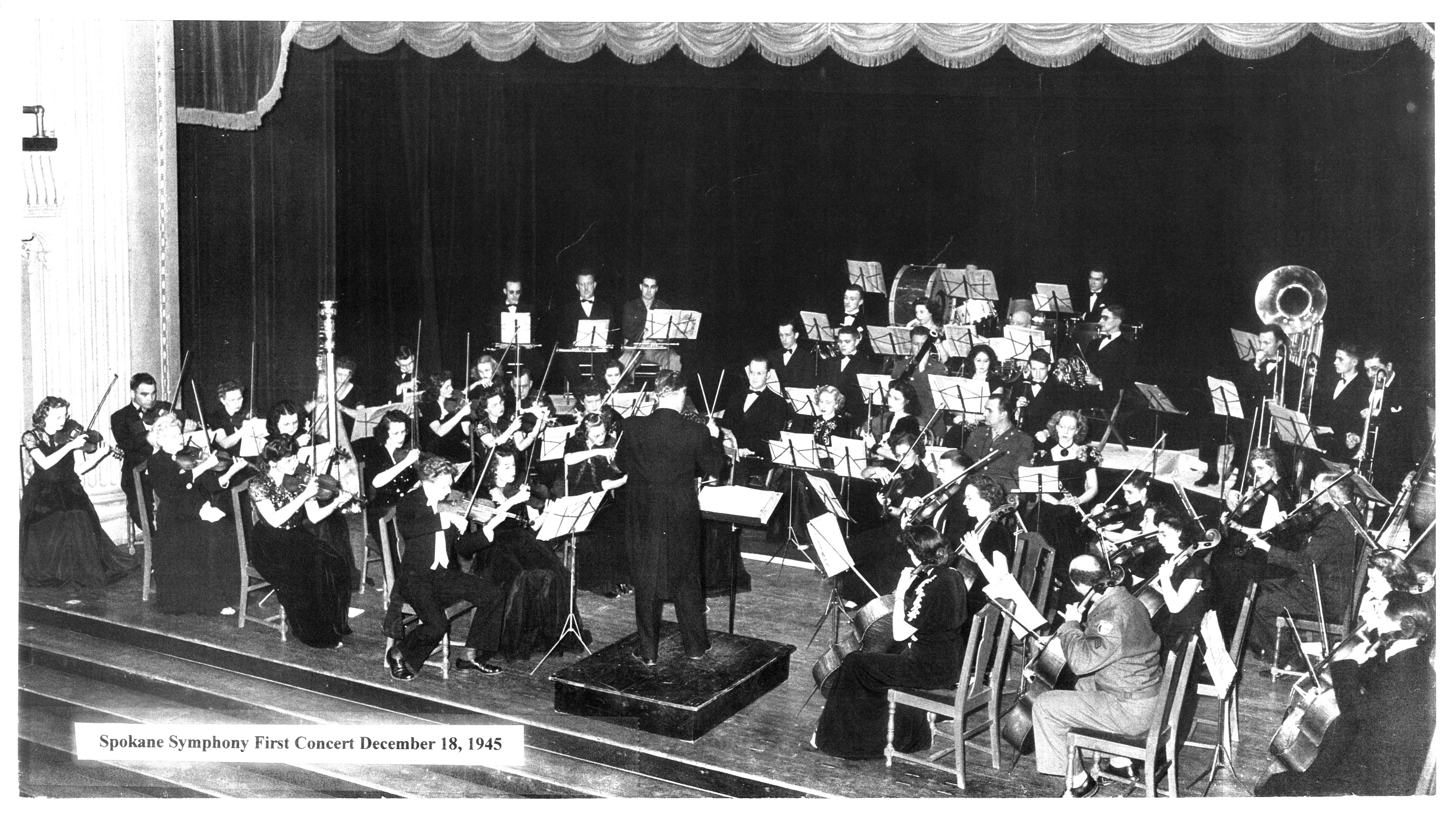 Jane died at age 58 on May 18, 2002 of melanoma cancer. One of the cancer treatments required hours in the hospital for blood transfusions. Never wanting to waste a minute and the queen-of-multi-taskers, Jane practiced during the transfusions, much to the delight and amazement of the hospital staff. Her last performance was with the Spokane String Quartet in March of 2002, of which she was 2nd violinist for many years. When she became too weak to play, she reluctantly put her violin away and never opened the case again. Until Evelyn was diagnosed with Alzheimer’s at 90, playing her violin sustained her and brought her great joy. She died August 6, 2008 at the age of 98.

In the late summer of 2002, the idea for an endowed chair in both names was discussed with the Spokane Symphony. It was quickly approved and followed by an overwhelming response from the public to the announcement of the Ayer-Blegen Endowed Chair. By the end of November, 2003, the SSO had received gifts and pledges from 167 donors totaling almost $65,000, with $100,000 the eventual goal. This goal was reached in July of 2009, and much credit and appreciation goes to the generosity of so many.

In an interview in the local newspaper in 1949, my mother stated, “As a member of the Spokane Philharmonic Orchestra for the last four years, my greatest pleasure and benefit has been in learning and playing the works of great composers. Most housewives need and maintain an interest outside of home and daily duties and participation in the Philharmonic is, to me, a very happy diversion, and makes possible my greater enjoyment of the fine symphonic music presented over the radio networks by the great orchestras of the country.”

Women have always been accepted in, and perhaps even formed the backbone of, amateur and semiprofessional orchestras in the United States. Usually offering part-time work and paying “per-service” rather than on a seasonal basis, such orchestras play important roles in the lives of their communities. The numbers of women in such smaller-budget orchestras have always been higher than in the major orchestras, averaging between 42 percent and 46 percent. Gender discrimination for the “other half of humanity” was not an issue, as it was in major symphony orchestras for many decades.

Sir Henry Wood, conductor of the London Queen’s Hall Orchestra, claimed to be the first conductor to admit women into a professional orchestra. In a 1913 letter to the Times of London, the famed British composer Ethel Smyth, later named Dame Ethel, pointed out that “the inclusion of women in a first-class orchestra… a privilege till now restricted, for some mysterious reason, to harpists.”

From the early 19th century until the 1960s, symphony orchestra membership was strictly controlled by invitation of the conductor or manager, and few women had the opportunity even to audition for a position in a major orchestra in the United States and Canada. Some conductors hired the best player, even if she also happened to be a woman. Leopold Stokowski hired cellist Elsa Hilger to the Philadelphia Orchestra in the mid 1930s, and later the next conductor, Eugene Ormandy, appointed her assistant principal, but never to the principal position. In her words, “I would have been principal but my pants weren’t long enough.”

With the outbreak of World War II, men left their professions faster than the vacancies could be filled. In their places, women flew airplanes, towed targets, worked rigorously in factories and defense-related positions – and filled men’s chairs in major American orchestras. At war’s end, many of these women were expected to give up their jobs to returning soldiers. Not all of them did so, and their stories open a window on a generation of women who changed American society by securing a place for themselves in the workplace, the newsroom, the battlefield – and on the concert stage.

An October 1944 article in the Minneapolis Sunday Tribune notes the presence of four women in the Minneapolis Symphony. “Two of the players are symphony wives,” Dorothy Riley wrote, adding that “one of them wants to return to her role as housewife as soon as the war is over, and that the engagement with the symphony is definitely a wartime measure.” That same year the Boston Symphony Orchestra held a fund-raising meeting attended mostly by women. Music critic Alan Rich reported that the orchestra’s president announced that if not enough money was raised, the orchestra would have to reduce the number of players and length of its season and “lower its standards” by hiring women. Just eight years later, in 1952, the Boston Symphony hired Doriot Anthony Dwyer as principal flute. The headline in the Boston Herald read: Woman Crashes Boston Symphony.

In 1960, no US orchestra paid its musicians a full-time salary. Sixteen years later, in 1976, eleven US orchestras paid all of their musicians on a fifty-two-week basis, and the proportion of women increased from 18 percent in the early 1960s to an average of 25 percent just ten years later.

Finally the possibilities for women to have full-time careers of any kind, including an orchestra career, were becoming realized. Women’s issues and problems escalated in almost direct proportion to their finding orchestra jobs. The same year Congress passed the Pregnancy Discrimination Act in 1978, the following language was issued in the personal contracts of a major American orchestra, only to be removed shortly thereafter.

If a female becomes pregnant between the time she signs this contract and the opening of the season, this contract will be void. A musician who becomes pregnant during the season will be paid only for all services rendered up to the time she stops performing with the orchestra. Such musician will notify the employer of pregnancy and misrepresentation of condition relieves the employer of any liability.

The important terms of today’s master agreements in major symphony orchestras, such as contract ratification, lawyer representation, players committees, pension, sick leave, maternity and paternity leave, insurance, working conditions and tour provisions, were the result of a labor struggle unique in labor history. The symphony musicians’ historic grassroots movement that became ICSOM in 1962, the International Conference of Symphony and Opera Musicians, transformed labor relations and the professional lives of US and Canadian musicians. Before ICSOM, the conductor held all the power to hire and fire, with no recourse for the musician. Symphony musicians are now universally protected against discrimination on the basis of sex, race, age, and union activity.

In 1980, for the first time, forty-two years after the 150 female musicians of the New York Local had met for a relatively inconsequential discussion, the women representatives of ICSOM began to discuss issues specifically related to their professional lives and their status as symphony musicians, including pregnancy leave, tours, auditions, committee and ICSOM representation. Also addressed was the woefully inadequate or non-existent dressing rooms for both men and women. www.icsom.org

Nathan Kahn, Negotiator for the Symphonic Services Division of the American Federation of Musicians and double bassist, offers historical perspective:

Regarding the number of concerts in ROPA orchestras; it varies. By contrast, Nashville Symphony (which I was a member of, previously in ROPA, now in ICSOM) did 9 triples of classics when I was there, now does something like 14 pairs of classics plus other series, specials etc. When I first came to Colorado Springs the orchestra did 10 quadruples of each classics, now down to 7 pairs.

Structure also has varied. Fort Worth Symphony was a more a community-based orchestra in the 80s; not the case any more. Many ROPA orchestras added core orchestras during the late 70s/80s in order to attract a better crop of musicians, and in this current economic climate, too many of these orchestras are seemingly seeking to scale back to totally per service or something in between.

The Spokane Symphony, a ROPA orchestra, presents @ 180 services per season, including 10 Classic Concerts, 6 Pops Concerts, 3 Chamber Soirees, 3 Chamber Orchestra concerts, and a number of educational and outreach concerts/activities. Since its founding as the Spokane Philharmonic in 1945, the numbers of women have remained between 25 and 30, typical of most orchestras of this size. Of the 67 members of the orchestra, Tier 1 is a core of 36 contracted musicians who play all 180 services. Tier 2 is 16 more players contracted for 125 services, and Tier 3 is an additional 15 musicians, guaranteed 87 services per season.

All the more extraordinary that in these difficult economic times, the loyalty and devotion to Spokane Symphony is exemplified in the achievement of the $100,000 goal for the Ayer-Blegen Endowed Chair.