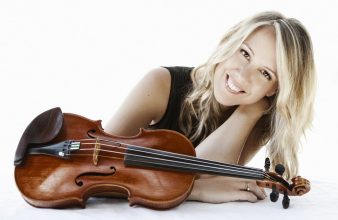 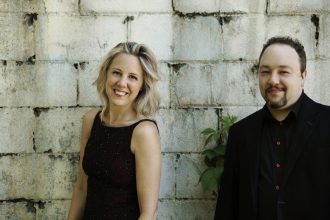 For years, Robert and Victoria Paterson (both Eastman alumni) envisioned starting a summer music festival. With the success of American Modern Ensemble, a thriving boutique record label now in its 13th season, and robust lives as musicians in New York City, Robert and Victoria decided it was time to expand their mission with a broad educational component that serves composers, singers, and instrumentalists world-wide.

The Mostly Modern Festival will launch its inaugural season in June of 2018.

What factors led to your decision to create your own music festival?

American Modern Ensemble has done residencies at colleges and universities since it began in 2005, but it only served a small group of composers and always just for a couple of days. AME wanted to expand its educational outreach and offer more to composers, singers, performers and conductors who love new music. We found the perfect spot in Saratoga Springs, New York at Skidmore College with a new and breathtaking performing arts center, Zankel Hall. This is an outstanding opportunity for composers and performers alike!

Did you encounter any challenges in your initiative that you did not expect, and how did you meet these challenges?

The start-up costs to get the word out and to get students to apply were larger than anticipated; we had to find thousands of dollars for advertising, brochures and promotion. AME just wrapped up its 12th season with a huge opera at the Brooklyn Academy of Music this past June, and turning around to launch the festival is a little tight. We are making it work, but sometimes what looks like plenty of time on paper is actually rather tight.

How did your experiences at Eastman influence your decision to create and develop the Mostly Modern Festival?

Eastman was a place where we could explore new ideas and new music, as well as celebrate the classics and learn both in a welcoming and warm environment. For example, John Beck gave Robert Paterson an open door to explore and expand his own new 6-mallet technique. Most teachers would ‘poo-poo’ something so ‘out’, whereas Beck offered his encouragement and Robert performed an entire recital featuring this technique.

How do you balance an active career in both performance and administration?

Robert Paterson is actively composing commissioned works and balancing that with running AME & Mostly Modern Festival. Recent works include his opera Three Way for The Nashville Opera, Shine for the American Brass Quintet, and Moon Trio for the Claremont Trio. Victoria Paterson is actively playing violin on Broadway almost every night as well in addition to running their non-profit, AME & Mostly Modern. It is an active juggle and the schedule is very packed but it keeps everything fresh and varied.

What do you envision for the future of the Mostly Modern Festival?

Mostly Modern is about to begin its very first year in June 2018. The scope of the festival is broad, with the American Modern Orchestra, AMChoir and featured chamber music ensembles (Euclid String Quartet, Imani Winds, and the Atlantic Brass Quintet). Other summers may feature song cycles/opera scenes alternating with choir performances. It would be ideal to secure more funding and grants so that MMF can offer more scholarships and fellowships to students after this first year.

Do you have any advice for current Eastman students, particularly for those wanting to pursue a career in new music?

New music is thriving in many ways here in New York City and beyond, especially in chamber music and opera. I personally hope orchestras embrace new works on every program, and that it becomes just a standard thing to do, without fear of losing audiences. It is perhaps difficult to make your entire living on new music, so be ready to wear many hats in order to successfully sustain your living. The variety is terrific and there are so many fantastic composers today that need to be showcased!