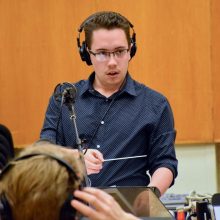 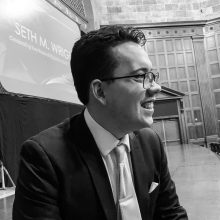 Seth Wright (MM 2019, ALP Certificate) is a composer and music designer on a mission. A firm believer that game and film music is the ‘art music’ of our time, he is committed to creating engaging and responsive scores that grip players and shatter expectations. While most known for his work on the world’s first fully adaptive and live recorded video game music license, Project Hiraeth, Seth enjoys collaborating on a variety of projects, including triple-A games, indie films, and works for the concert hall.

You offer your compositional services for film/commercial music, video game audio, and concert music. What are the unique challenges of each genre?

You know, this question pops up from time to time, and I always enjoy answering it. Each of my three areas of ‘specialization’ are challenging and rewarding for different reasons. Concert music composition is a largely isolated process, whereas composing for films and games entails working with a team – something that I happen to really enjoy. Composing for the stage is also a bit more of a streamlined process, in that at the end of the day it’s just me and a page, and my only responsibility is to actually write the music. For film composition, a ‘composer’ is also expected to be a contractor, mixing and mastering engineer, mockup specialist, sound designer, and – of course – a ‘people person’. Working with video games brings the added opportunity to actually integrate the music into the game, which is something I pride myself on doing personally. I love the freedom to fully explore my own voice allowed by classical commissions, but I also really enjoy the nearly limitless sounds available to film and game composers.

“I turn sound into emotion,” your website reads. Can you give an overview of your creative process? How does sound become emotion, and how does emotion become sound?

Composers spend years and years of their lives studying how to craft music well, but the reality is that audiences – especially for films and games – don’t care about theory. People remember feelings, which is why all of my conversations with film and game directors focus on how particular parts of the product should make viewers feel.

For film, my work begins after the project has reached ‘picture lock’, meaning that the actual length of all of the scenes in the film will not be changed. Then, I meet with the director for a spotting session at my studio, where we discuss where music should happen, and how it should make viewers feel. After this, I get to work. All of my music is at least partially computer generated, but is usually supplemented with live-recorded instruments.

There are many tools that composers use to ‘create’ emotion, from weaponized cliché’s like the Zimmer low brass “BWAAA” (which is, believe it or not, a professional term), to high cluster harmonics for scary scenes. A couple hundred years ago, the foundation for a good composer was solid counterpoint. Nowadays, counterpoint is still valuable, but the crux of a composer’s skill is his or her ability to utilize these musical cliché’s in unique ways. From this point, a composer develops their voice by equipping themselves with things that are unique to their sound, be it sound design elements, particular tonalities, or a specific approach to supporting drama on the screen.

Project Hiraeth, your “tour-de-force” production of high quality music is adaptive, and available to indie games. Could you explain the concept a bit more? How does it work? What inspired this project?

Hiraeth is the world’s first fully orchestral video game music license. In everyday terms, this means that a video game developer can purchase the product and have a huge, cinematic, and orchestral score in their game in under a week. This type of thing is common in TV and movies, where music ‘libraries’ are prevalent, but just isn’t done to this level for games. What makes Hiraeth truly special is that the music is pre-programmed to be adaptive: it changes in real time based on what players in the game are doing. For example, if a player moves from exploration to combat, the music will adjust, without clunky cross-fading.

The score features over 90 minutes of orchestral music, all integrated into leading game engines, and highlights some of the best musicians in Rochester. It was professionally recorded, mixed, and mastered, and can be purchased in part (maybe the game just needs one or two of our music environments) or as a whole unit. We recorded the whole thing at Eastman, in just over 7 hours of straight recording time – which, by the way, is something that nobody should ever do. I slept for about a week after that one!

On a more personal note, I feel strongly that the future of art music is already here in the form of film and game soundtracks. This generation’s Mozart may very well be a video game composer, but the classical world has a tendency to brush off this type of music as a “lesser” medium. I also think it’s critically important that composers embrace technological innovation as a tool, instead of a barrier. Too many games these days feature rich and diverse scores that don’t even scratch the surface of what can be done in terms of adaptivity and integration, because often the composer isn’t even involved in that part of the process. I’d like to change that, and Hiraeth was a tangible step to making that happen.

What does the future of composition look like for you? What is your next goal?

Currently, my work is extraordinarily diverse. In a given week, I might be fulfilling classical commissions, helping with audio on upcoming video games, or scoring any number of indie films or commercials. Now that I’m starting to build up a career, I’m confronting broad questions that – to me – are valuable; things like “how can I set myself up to prioritize my family well”, “what does it look like to be a Christian in this industry”, and “how can I tailor my work habits to help maintain a love and passion for my craft in the long haul?”

How did your work with the ALP help to influence your aspirations? What were some of your favorite projects you worked on at Eastman, or through the ALP?

The Arts Leadership Program was an invaluable experience for me. Each of the classes and opportunities I had through the program were valuable, but a few stand out in particular. First, courses like “Entrepreneurial Thinking” and “Career Skills for the 21st Century” helped me hone skills like negotiation, website management, relating to clients, and working with contracts. Second, the ALP offers a great deal of additional lectures and clinics, which exposed me to a variety of professional topics I hadn’t explored, like ‘teaching artistry’ and ‘music advocacy’. Finally, I was able to receive funding for a huge internship through the program that resulted in my first major break in the industry. I am currently collaborating on a major game project that was a direct result of my ALP summer internship.

Outside of ALP, Eastman provided me with some truly extraordinary opportunities. The Eastman film scoring program is unique for several reasons, but mostly because of the intensity of the “Film Scoring I and II” coursework. Studying with Mark Watters and cranking out a pro-level recording session once a month was an intense challenge, but I developed a real skill in writing under pressure, which has been invaluable. Our second-year trip to LA (sponsored by my performing rights organization, BMI) was also a highlight, giving us hands-on experience with some of the biggest names in the industry.

At the risk of sounding cliché, I’m proud to be an Eastman Alumnus. I feel that I was well-prepared by the program, and appreciate that my professors have continued to invest in me after graduation.