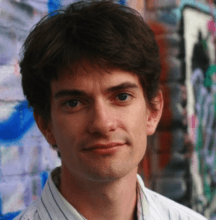 Sean Connors completed his undergraduate studies and the Arts Leadership Certificate Program at Eastman, and is now pursuing his doctoral degree. He is the newest member of Chicago-based percussion quartet Third Coast Percussion.

How does your career at the moment compare to what you thought it might be or wanted it to be when you were in your undergrad at Eastman? What influence do you think ALP might have had on this career?

To be honest, I didn’t think what I’m doing right now was even a career option when I was an undergrad at ESM! Being in a percussion quartet full-time has been an “unrealistic dream” ever since I started to play chamber music back in high school, so it is exciting to be going into work every day in order to do something that I love. To be sure, it is exhausting, but I wouldn’t call it work. I’m lucky to have been pushed extremely hard early on in my career and to have been open to opportunities when they arose.

The experiences that I gleaned from my time in the Arts Leadership Program have proven to be invaluable for me in so many aspects, in everything from making mundane tasks more bearable to making me more prepared for some of the most pivotal points of my career. For example, my ALP internship as an undergraduate student placed me for the first time behind the scenes of the administration of an arts organization. I got a glimpse into a professional office at a major academic institution and learned so so so many things that are now second nature to me. I saw how professionals corresponded with each other in person, on the telephone, and via e-mail…skills not to be underestimated. I sat in on budget, procedure, and planning meetings that showed me the importance of trust, delegation of tasks, and efficiency in large organizations. I learned how to make address labels and how to use those other programs in Microsoft Office that aren’t Word. I actually learned how to use a photocopier efficiently! It sounds like a joke, but I can’t tell you how many times I taught students how to make double-sided packets with staples in them, and they looked at me like I had just granted them a wish after they rubbed a lamp. In addition to the experiences I had during my internship, the ALP classes in which I participated prepared me to do things as varied as completing my taxes as a self-employed artist to presenting a lecture to a group of undergraduates about entrepreneurship in music. Perhaps most significantly, as part of Third Coast, half my salary comes from my role as an arts administrator and it absolutely cannot be overlooked that the only formal training I’ve had in arts administration has been through ALP at Eastman.

As a member of Third Coast Percussion, what are some of the challenges that you face, both musically and logistically, when preparing for a performance? How do you work through those challenges?

One of the unique things about being in a percussion quartet is that every piece of music we play requires a different set of instruments and comes with an almost entirely new set of musical and logistical challenges. We need to answer all sorts of questions: “What parts/instruments are we each playing?”, “How do we build THAT instrument? What’s it called again?”, “Do we need a 15 foot passenger van or a 20 foot box truck to transport the instruments for this gig?”, “Will these instruments fit on the stage we’ve been hired to perform on?”, “How can we set up the instruments so that the audience doesn’t have to watch us carry a bass drum across the stage right after the first piece?” and so on.

We work through the musical decisions together as a group; we’re four equal artistic members. However, to help answer some of the logistical questions, we divide up the administrative tasks amongst the four of us: David is our executive director and booking agent; Rob writes grants and is our development director; Peter is our financial director and takes care of contracts, payments, merchandise, and just about anything that involves money coming into or out of the group; and I’m the technical director, which includes tasks like writing tech riders, designing stage plots, booking travel, and interacting with production teams at venues.

In what ways do you believe TCP makes a unique contribution to Chicago’s cultural atmosphere? Are there other new ways in which you would like to see the group contribute to that atmosphere?

I am extremely proud to be part of the vibrant new music scene in Chicago. Third Coast is one of several groups, including Eighth Blackbird, Dal Niente, Fifth House, Spektral Quartet, Parlour Tapes+, and others, that have contributed to a major rise in support for contemporary classical music in our city. We collaborate on stage, attend each other’s concerts, and hang out as friends and colleagues informally. It is an incredible time to be making “new music” in Chicago and the city has rightfully earned a reputation as a major hot bed of musical innovation. TCP has helped in its own way to nurture this atmosphere over the past ten years or so by self-presenting concerts in Chicago of music that wouldn’t otherwise be represented by professional ensembles. I’d like to see us eventually put out an album on a Chicago label that features compositions written for us by Chicago-based composers. It could be called “Music from the Third Coast”, or something like that…

TCP clearly places a lot of value on education and outreach—what are your own thoughts on how percussion is a uniquely effective tool for teaching music and connecting with the community?

Percussion is also universal. There is percussion in every single musical culture in the world. In addition, playing percussion might be one of the most visually engaging musical activities to observe. There is something dancelike about how a good percussionist moves.

The global recognition, visual engagement, and immediacy of sound that percussion instruments have make them perfect vehicles for interacting with just about any group of people. For example, I saw a Japanese Taiko drumming group composed of deaf performers give a concert for a largely deaf audience that was extremely successful and engaging. Not only did the performers not speak the same language as the audience, they didn’t even communicate music through the physical action of hearing, yet nobody who saw the performance would argue that music was not being made.

With all of this in mind, teaching music through percussion is one of my favorite activities. I’ve learned more about myself and others through teaching and being taught percussion in private and group settings than perhaps any other means. It is my favorite way of connecting with the community around me. I could go on and ON AND ON about this 🙂

Sean Connors is an ensemble member and Technical Director of Third Coast Percussion, the Chicago-based and internationally renowned percussion quartet. He is the newest member of the group, having joined in 2013. Since then, Third Coast has become the Ensemble-in-Residence at the University of Notre Dame and performed over 100 concerts in 11 states and 3 countries. Highlights for Sean as a member of Third Coast during this time include: performing with Hubbard St Dance Chicago; launching the New Music USA sponsored Emerging Composer Partnership; collaborating with composers such as Timo Andres, Glenn Kotche, David T. Little, and Augusta Read Thomas; presenting a Chicago Concert Season at venues including the Logan Center at the University of Chicago, Millennium Pak’s Pritzker Pavillion, Constellation Chicago, and the Chicago Cultural Center; working with the student H.C.I.H.M Marimba Ensemble in the Back of the Yards neighborhood in Chicago; and being guests at summer festivals including Bravo! Vail, Garth Newel Music Center, and the Chautauqua Institute.

Sean is also one half of the percussion group Amphion, an ensemble he co-founded with Greensboro Symphony principal timpanist Peter Zlotnick. Amphion has performed at venues and festivals across the nation, including the Aspen Music Festival, Detroit Institute of Art, and Constellation Chicago. Besides championing the music of George Crumb, Morton Feldman, Gyorgy Ligeti, and Steve Reich, Amphion has premiered and commissioned works from several composers including John Mayrose, Brendan Faegre, Tomasz Arnold, and Matthew Evans.

As an educator, Sean served for 2 years as Assistant Professor of Percussion at the University of Wisconsin – Stevens Point, held positions on the faculty at Onondaga Community College and Roberts Wesleyan College, and taught elementary school and middle school music in the Chicago suburbs. He was also the percussion mentor for the New Horizons Program through the Eastman Community Music School in Rochester NY through which he worked with seniors interested in pursuing music later in life.

Sean holds a Bachelor of Music degree, performer’s certificate, and Arts Leadership Program certificate from the Eastman School of Music and a Masters of Music degree from Northwestern University. He is currently pursuing a Doctorate of Music at Eastman.