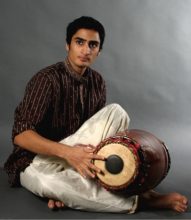 Rohan Krishnamurthy is a current M.A./PH.D student in musicology/ethnomusicology at the Eastman School of Music. Recently, his project “A New Design of the Ancient Mridangam” was awarded 1st prize in the 2008-2009 Eastman New Venture Challenge. The New Venture Challenge is a contest to encourage new thinking and innovative ideas in music. It gives students the opportunity to develop a business plan that could result in the launch of a new entrepreneurial enterprise. As 1st prize winner, Rohan will receive $2000 to help launch his new venture.

You just won the 2009 Eastman New Venture Challenge – Congratulations! What is your new venture idea?

am delighted to have been selected for the award! My project deals with my recent reengineering of an ancient South Indian drum called the mridangam. My new design combines the traditional fastening system and aesthetic with a modern, nut-and-bolt system of tightening to make the drum more user-friendly and sturdy for practitioners worldwide. The Indian percussion industry is rapidly growing in the United States and I am confident my invention will be beneficial to musicians of various backgrounds.

What do you think is the general timeline for the future of this venture?

I have already filed a provisional patent, which will allow me to test the commercial viability of my design. Within a year, I will file for a utility patent and make my drum available for sale. I am thankful to the Institute for Music Leadership and the Eastman School for supporting and advancing my project and interests.

How important do you think it is for musicians to be entrepreneurial?

It is crucial. America was built on entrepreneurial thinking and continues to strive towards cutting-edge innovation. Musicians should not be exempt from this process and should treat it as an opportunity. In my opinion, entrepreneurship is a means by which to channel one’s creative talents and energy towards spreading their passion in new and unconventional ways.

Do you think musicians should study entrepreneurship, get first hand experience (like you are with the new venture), or possibly both?

Entrepreneurship courses can be very helpful to get people acquainted with the idea of entrepreneurship. Like anything else, it is a skill that can be learned and honed, but novel ideas require inspiration, careful thought, and a keen understanding of the demands of the market. This, coupled with hands-on experience, is the ideal way to foster entrepreneurial thinking.

Do you envision your career being a mix of traditional music activities and entrepreneurial projects?

As a percussionist with a unique specialization in South Indian percussion, it is my goal to share this ancient, complex, and moving art form with uninitiated audiences to promote new musical collaborations and cross-cultural understanding. Performance, research, teaching, etc., are all various embodiments of entrepreneurship that are interrelated and complementary. So far, my career has reflected this and I am excited to see what other projects I will get involved with here at Eastman!

Acclaimed an “international performer and promoter” of the South Indian pitched drum, the mridangam, by USA Today, a “percussion prodigy” by The Hindu (India), and “India’s pride” by the Times of India (India), Rohan Krishnamurthy is considered a young musical ambassador in the Indian music scene. Having initially received mridangam training with Damodaran Srinivasan over a telephonic setup in the U.S. and continuing advanced training from the mridangam maestro Guruvayur Dorai in India, Rohan has performed in hundreds of concerts in North America and India since the age of nine with leading Indian musicians.

He has been invited to perform for ten consecutive years during the celebrated December Music Season in Chennai, India and has spearheaded numerous cross-cultural projects with well-known symphony orchestras, jazz ensembles, and distinguished musicians including Grammy Award-winners Glen Velez and Vishwa Mohan Bhatt, Anoushka Shankar, and Ayano Ninomiya. He recently presented a weeklong performance of “Echoes,” a novel concerto for mridangam and string orchestra, with the Kalamazoo Symphony Orchestra, an event that attracted nearly 13,000 schoolchildren from across Michigan. “Echoes” has since been programmed by several professional orchestras in the U.S.

Rohan has presented numerous Indian percussion summer camps, workshops, academic lecture-demonstrations, and ambassadorial events throughout the U.S. and India, and is the recipient of several awards, including USA Today’s “All-College Academic Second Team,” “Young Artist of India” by Bharat Kalachar (Chennai, India), Thomas Siwe Scholarship from the Percussive Arts Society, and “Prodigy in Performing Arts” by the Indo-American Center in New York City.

An innovator, Rohan has redesigned the ancient mridangam to make it more user-friendly and durable. His work resulted in a publication in the premier music journal, Percussive Notes, last year. Rohan conducted acoustical research on his new design at Coe College, Iowa, and was invited to present his work at the Acoustical Society of America’s annual conference in New Orleans, where his presentation received the “Best Student Paper” award.

Rohan’s multifaceted accomplishments earned him a one-on-one meeting and performance for the President of India, Dr. Abdul Kalam, at the presidential office and estate in New Delhi. The President commented, “You an expert in your field and are doing wonderful things to bridge cultures through music. You have a very bright future!”

Rohan is currently enrolled in a graduate program in musicology/ethnomusicology at the prestigious Eastman School of Music as a Provost’s Fellow.