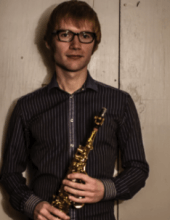 Phil Pierick (philpierick.com) is a doctoral candidate, ALP certificate candidate, and a Performer’s Certificate recipient at ESM; he was recently awarded a Fulbright grant to study in Vienna for the upcoming academic year. An accomplished saxophonist, Phil has distinguished himself particularly in the performance of new music and as half of the saxophone duo Ogni Suono.

In your bio, you describe yourself as a “staunch advocate for new music”.

When did you first take a special interest in new music – how did you become such a staunch advocate?

According to my mother, I have always been interested in “unusual” music, though I seemed not to notice until I was in college that this music was out of the norm for classical music fans. With new music, each piece is a bit like a puzzle of an abstract painting that the listener or performer has to figure out how to piece together.

I enjoy that challenge from both viewpoints. Music of and relevant to our time is still underrepresented in the programming of most musical organizations and solo artists, so I enjoy advocating it among both my fellow performers and our audiences.

You perform as part of the saxophone duo Ogni Suono; what are some challenges that the duo has faced, both musically and logistically, and how did you work through them?

Geography is our biggest challenge. My partner, Noa Even, and I have always lived 5-6 hours by car apart from each other, which means limited and condensed rehearsal time and months or years of planning in advance. It has taught both of us to rehearse more efficiently and has forced me to be more organized than I ever used to be—that was never an issue for Noa though! Another logistical issue is the saxophones. We typically use 7-8 instruments between the two of us for a performance, which means either traveling by car or borrowing instruments if flying. Playing four saxophones in a concert is difficult enough, but when two of the instruments are not your own it adds another challenge to the mix.

Since our focus is on new music, and specifically commissioning and premiering new works, each piece can present many musical challenges. We have been lucky to work with many composers who take an interactive approach to their compositional processes, meaning we have had the chance to say, “this doesn’t work” before it is too late.  Putting together very complex pieces in two or three rehearsals for a premiere is always a bit scary, but is a great mental and musical workout.

You were recently awarded a Fulbright grant to study in Vienna. What are some specific goals you hope to work toward during your year of Fulbright study?

There are so many! I’m looking forward to learning a lot more about active European composers, especially younger and student composers, to performing with new colleagues all over Vienna as a part of my Fulbright proposal, to focusing on contemporary and interdisciplinary performance with my teacher, Lars Mlekusch, and to spending many nights at the Wiener Staatsoper. On a non-musical note, I’m hoping to become more proficient at spoken German, explore Austria, and sleep a bit more than I have during my last two years in Rochester!

What are some ways you intend to continue advocating the composition and performance of new music?

My Fulbright project involves performing new music in unexpected spaces around Vienna, which will be an exciting way to advocate new music and connect with Austrian people. Several commissioning and performance plans are in the works over the next couple of years for my saxophone duo, Ogni Suono. After returning from Vienna, I plan to be more involved with Eastman’s OSSIA and perhaps even form a new contemporary chamber ensemble. I am very interested in commissioning and performing mixed chamber works that include the saxophone alongside other instruments. Chamber music has long been a rewarding and stimulating outlet of expression for me. In the future, I hope to foster the talent of others as a professor, where I can use my experiences to equip my students with the skills for pioneering new music in their own futures.

Ogni Suono is committed to expanding and promoting the repertoire for saxophone duo by commissioning and performing new works of various styles while also conducting workshops for students. Since 2010, Ogni Suono has performed and taught throughout North America, Southeast Asia, and in Europe, with performances at the World Saxophone Congress, Singapore Saxophone Symposium, North American Saxophone Alliance Conferences, and various art galleries, universities, and music schools. The duo has conducted workshops for young saxophonists in Chicago, Malaysia, and Thailand and community outreach programs in Iowa City, IA as winner of a 2012-2013 Yamaha-in-Residence Fellowship from the College Music Society.

A Fulbright Scholar for 2014-2015, Phil will focus on contemporary performance practice in Vienna, Austria with Lars Mlekusch. The only saxophonist to receive prizes at both the Jean-Marie Londeix International Saxophone Competition (2014) and the ISSAC International Saxophone Competition (2012), Phil is also a three-time prizewinner at the MTNA National Young Artist and Chamber Music Competitions (2009, 2011, 2012), and was named Vandoren Emerging Artist of 2011. A national winner of the 2009 Frank Huntington Beebe Fund for Musicians, he studied with Jean-Michel Goury in Paris at the Conservatoire à rayonnement régional de Boulogne-Billancourt.

In April 2014, he received Eastman School of Music’s Teaching Assistant Prize for his work as an instructor of chamber music at Eastman. Phil aims to foster the internal curiosity and creativity of students, cultivating their own personal musical interests and goals. His students have taken first prize in the MTNA National Chamber Music (2014) and 198th Army Band Small Ensemble (2013) competitions, and have been semi-finalists in the ISSAC International Saxophone Competition (2013). Guest teaching has taken Phil to the Allerton Chamber Music Symposium, Illinois Summer Youth Music, and more than a dozen universities and conferences throughout the United States, Canada, and Taiwan.

Phil is currently a doctoral candidate, ALP certificate candidate, and recipient of the Performer’s Certificate at the Eastman School of Music, under the direction of Chien-Kwan Lin. His Bachelor and Master of Music degrees are from the University of Illinois at Urbana-Champaign, where he studied with Debra Richtmeyer and held the position of saxophone teaching assistant.