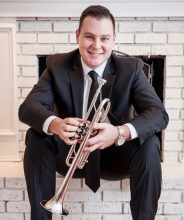 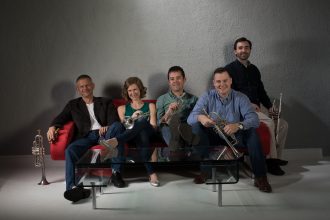 Dr. J. Peyden Shelton (ESM DMA ’16) currently serves as the Assistant Professor of Trumpet at the University of Utah, and is one of the founding members of the electro-acoustic trumpet quintet, Fifth Bridge, whose primary mission is to create and perform new works utilizing digital-processing and amplification. Their unique role has led to innovative collaborations with notable composers, scientists, and organizations such as N.A.S.A., the Smithsonian Institute, and the Harvard Center for Astrophysics, to showcase scientific data through the medium of performance art.

In addition to his role as a chamber musician, Dr. Shelton also is the creator of The Trumpet Repertoire Project. This venture supports the creation of new collaborative works for young trumpet and piano performers to refine key technical and musical artistic elements through performance.

New music has always been attractive to me as a performer in that it often doesn’t have a perpetuated performance voice of its own. Many of the standard concertos and sonatas used in academia and competitions throughout the world have often existed in those realms for decades, and individual interpretations are often scrutinized against past recordings and performances of those works. This perpetuation inhibits the growth and freedom of expression, especially in young performers, when these works are brought to the recital stage. I find that when approaching new works, it allows me to truly have my own voice in a performance. Through those works, I am not attempting to recreate a great performance I heard in concert or via recording, but rather presenting, in its purest form, what I feel from a given composition.

Fifth Bridge, a trumpet quintet of which you are a member, is scheduled to premiere a new work titled Black Rock by David Sampson in 2020. Can you talk about your work with Fifth Bridge, and how the ensemble discovers composers to partner with?

Fifth Bridge is a new electro-acoustic trumpet quintet that creates and performs new collaborative works that feature digital processing and amplification as a core performance element. Prior to the ensemble’s creation, no large corpus of repertoire existed that featured these performance elements. Since its founding in 2017, Fifth Bridge has commissioned and performed over a dozen new electric-acoustic works in concert, with numerous other works currently in their compositional stages. The ensemble often utilizes composers who understand brass, specifically trumpet, for their commissioning projects. The most recently commissioned work, Black Rock, features the compositional style of renowned composer David Sampson. Fifth Bridge’s relationship with David Sampson began at a recital performance of Sampson’s Breakaway at New York City’s SPECTRUM in April of 2017. Jason Crafton (Associate Professor of Trumpet at Virginia Tech, and Fifth Bridge member) and myself performed Sampson’s work with the composer in attendance. We had a conversation with him after the performance regarding his work and his wonderful approach to using fixed-media and acoustic instruments. This interaction helped spark a relationship that enabled Fifth Bridge to commission him to create a work for our trumpet quintet using the same fixed-media ideas that existed within his other compositions.

I believe that a commissioning relationship, especially in the early stages of any ensemble that lacks repertoire, should be forged with friends or close colleagues who understand your ensemble’s voice and mission. This personal connection enables a more organic and customizable compositional environment. Several works for Fifth Bridge were written by our own members. Kelly Rossum (Associate Professor of Trumpet and Jazz Studies at Christopher Newport, and Fifth Bridge member) composed several new works for our ensemble during its first year. His works Digital Copy and Sitting on the Dock Looking at the Stars were two compositions that really enabled our ensemble to take its first steps into the performance world. We have performed those two works at nearly every concert since, as they represent our true beginnings and fundamental mission as an ensemble. Once that core repertoire had been established, we began to utilize resources at our respective institutions to reach out to composers to help further build a corpus of works, and find new interesting ways of presenting this electro-acoustic medium.

Your dedication to new music also reaches toward the future through The Trumpet Repertoire Project, which promotes and creates new works for undergraduate performers. What has been the biggest reward of this project, and conversely, the greatest challenge thus far?

The Trumpet Repertoire Project has been an ongoing venture of mine since my time at the Eastman School of Music in 2015. The purpose of this project is to promote the creation of new collaborative works for trumpet and piano that function as an enhancement to the performance art, but also enable fundamental technical and musical growth for young performers. This project has already supported the creation of five new sonata-like works for trumpet and piano with financial help from the University of Utah in addition to personal fund-raising.

The biggest challenge of this project thus far has been acquiring funding for its first batch of new compositions. Finding ways to compensate artists for their work without financial backing is often difficult, and even more so when you are looking to create new works of art from younger, less widely-known composers. I was lucky to have a group of composers who were excited about the project from the beginning. While I was searching for ways to fund their work for two years, they continued to keep faith in the project’s primary mission. Once I was awarded funding through one of the University of Utah’s highly competitive Dee Grants, I was able to officially begin the project in 2017. All the works were created before the end of 2018, and I am currently in the process of premiering and recording these works for an album release in late 2021.

Despite that consistent difficulty, the biggest reward I have felt is that I know I am helping to contribute to the growth and longevity of my craft. The arts are always under attack from various groups for their perceived lack of capitalistic value to our society. This mindset often inhibits the educational and spiritual growth that music, and the arts, can provide beyond the monetary core of a work or organization. Being able to support and create these new works for young performers, in the hopes that they contribute to both the long-lasting corpus of repertoire of my instrument and provide pedagogical growth for performers, provides a strong sense of accomplishment and yearning to continue my efforts further. There is no greater reward than hearing a young performer present a work in the musical world that you helped bring to life.

Of course, you are also a renowned performer and educator, having been appointed Assistant Professor of Trumpet at the University of Utah, and having placed 1st in the Graduate Soloist Division of the National Trumpet Competition in 2014. Do you feel your passion for new music has helped support these facets of your career? How does it influence your repertoire selection when you are preparing for an audition, or competition?

I do think that my interest in new music has helped me to find success in my career. I feel one of the biggest reasons I found success at the 2014 National Trumpet Competition was that I performed a lesser-known work in the trumpet repertoire. At that time, Joseph Turrin’s Concerto for Trumpet and Orchestra had not been publicly released on any album, and only was known to a handful of the teachers and performers I had interacted with leading up to the competition. The fundamental techniques and performance quality had to be at a high level, but the unknown factors of Turrin’s work in the trumpet community allowed my performance to stand without any individual’s interpretation judging my personal musical choices. This allowed me to be THE artist of that work without trying to fit within the most popular recorded version at that time.

Unfortunately, that freedom doesn’t exist within much of the current performance repertoire. That is a primary reason that I started the Trumpet Repertoire Project, but I also encourage my students at the University of Utah to find and create new works on their own. This student-led exploration often uncovers many compositions that have fallen away from standard performance, and often allows the students to take on that same original artistic role when approaching a work for the first time. Additionally, their collaboration with many of our young student composers also provides my students the experience of creating new works from the absolute beginning. This interaction led to the University of Utah Trumpet Ensemble to be invited to the live quarterfinal round at the 2019 National Trumpet Competition – Small Ensemble Division where they performed a new original work by one of the university’s composition students.

I feel that this element of performance is crucial in today’s world. We often experience the perpetuation of the same repertoire being utilized in competitions and recitals. Allowing for a new era of repertoire gives the current generation of students their chance to grow in much the same ways of earlier generations. Letting students explore and create personal statements in new repertoire allows for their musical roles as artists to propel our craft to future generations, rather than consistently heralding the artistic interpretations of our past. Past generation’s work deserves praise, as it enabled our field to be where it stands today, but further creative works are needed to allow growth and innovation in the next generation. This revitalization is one of the main reasons I seek out and encourage newer works for my students, and myself, in many competition and audition settings.

How did your time at Eastman help to shape the multi-faceted career you currently maintain?

Throughout all of the programs that I have been a part, either as a student or faculty member, my time at Eastman has had the more of an impact on my teaching and performance than any other environment. The loving, family-like environment that is felt at ESM enabled me to be vulnerable as an artist, and gave way to some of the most notable progress as a performer and pedagogue that I have ever experienced. Being surrounded by many of the best young performers in the world, and taught by artist-teachers each week enabled me to harness a new level of musical application that was unknown to me when I began my DMA at Eastman in 2012.

The level of encouragement and supportive resources to aid in finding YOUR individual voice and research path at Eastman is astounding. From the numerous performance opportunities, to the Institute of Music Leadership, the Eastman School of Music allows any musician or educator to push the boundaries of their research and performance field. That is one of the many reasons I became so focused on presenting and creating new music for the next generation of performer. Eastman allowed me to understand our musical past and what made our craft what it is today, but also allowed me to pave a new path for the future of my profession.

I can proudly say that I would not be the musician, teacher, pedagogue, and artist that I am today without my time at the Eastman School of Music.