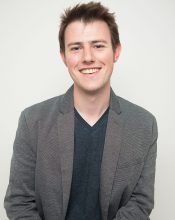 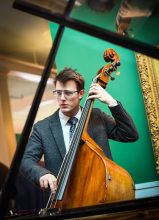 Congratulations on receiving a Post Graduate Paid Internship Award with Ike Sturm at Saint Peter’s Lutheran Church in New York City. How did you choose this for your Post Graduate Award?

Thank you! I first met Ike Sturm when the Eastman Jazz Ensemble performed at Saint Peter’s in March 2015 as part of the Eastman in NYC series. We reconnected twice that year when I produced two episodes of Jazz@Eastman – Past, Present, & Future that featured his music. For the second episode, Ike met with me at the church so I could interview him about his Eastman connection and writing process. As the interview progressed he told me about the work that he had done with the church over the past ten years. The more I heard about his work and the work the church does, the more it seemed like the kind of place I wanted to be.

What responsibilities do you expect to have during your time at Saint Peter’s?

I will fit into the work the church is already doing, and will also work to get a few new projects off the ground. The mission of the church is to “creatively shape life in New York City,” and they do this through a myriad of artistic means, social programs, and personal efforts. The overarching goal of my internship is to advance current initiatives in jazz programming, education, and outreach by providing support to Ike, the music director for the jazz ministry, and to the church’s full time media director. Some of the projects in the cue include adding an environmental justice component to the church’s yearly All Nite Soul festival, boosting the online and physical promotion efforts of the church through a collaboration with a major PR firm, and curating a series of events meant to engage younger jazz musicians. I hope to expand upon some of the experience that I have had with editing and producing interviews by gathering content from the artists and community activists involved with the church and by communicating the mission of the church through their lens. I’ve worked extensively with audio production and plan to become more comfortable with video production as well.

As Ike Sturm is an Eastman alumnus, you are in a unique position to speak on the importance of networking. How vital do you feel that networking was in terms of your career thus far? Do you have any advice on creative ways to reach out and connect with Eastman’s alumni network?

Networking has definitely played an important role in my career, but I’ve also had to distinguish between networking and sales. So far I’ve done a ton of networking and just a little bit of sales. Networking has been a very natural progression of trying to connect the dots between the various people in my life who do great work. It has been about chasing my curiosities and sharing freely the people and resources that I have found to be the most valuable, and trying to get other people to do the same. It has been about adding value to the work that I do as a musician by realizing and discussing mutual interests that are shared between the various people I work with. Sales has been a means of demonstrating the quality of the work that I can do in a way that is compelling to those whom I’d like to work with. For now, most of my focus has been on trying to figure out who those people are and pick their brains.

How have your experiences with the ALP Program changed your career goals?

For one, the ALP program has expanded my idea of what opportunities are available. I can’t chase something if I don’t know it’s there. The program has also added clarity and structure to the goals I had already, and has given me initiative to define aesthetic qualities of how I want my work to look and feel. On a personal note, the most important way that the ALP program has changed my career goals is through helping me to reconcile the fact that I am not fully and completely compelled by music alone. It has given me insight into who I am as a person, what I want to contribute as a citizen, and how to produce tangible results with other like-minded individuals. This clarity of purpose has had an immeasurable effect on my musicianship as well. It has added clarity to my goals, my practice techniques, my performance mentality, and everything in between.

How did you find ways to balance your interests in arts leadership with your curriculum as a student and member of the Arts Leadership Program?

My dad often reminds me about Parkinson’s Law – that work expands to fill the time available. This is absolutely true for me, and can be a good or a bad thing. I get more work done when I’m busy, and often it’s more difficult for me to do something if there’s only one thing on my to-do list. I also like to think along the lines of Newton’s laws, somewhat facetiously – when I’m in motion, I tend to want to stay in motion.

For me, forcing myself to put things into my calendar or my schedule in great detail was the best way to find balance with the various things I was working on. It may seem obvious, but it took me quite a bit of effort to stick to creating and updating my schedule. One of the things that was new for me in grad school was actually getting into Microsoft excel and putting my weekly schedule into a grid. All of my classes, mealtimes, work hours, practice, basketball…  I even color-coded it. I posted it in all of my work areas, at home, at work, in my practice room, on my binders. It seemed a bit sterile at first, but the structure was actually liberating. By working my break time into my schedule, I was able to more fully relax, and by setting a deadline for certain work to be done I had more of a crunch to produce.

Before I came back to school I was freelancing for a few years, and I often had several projects I was working on at the same time between gigs, contracting work, and radio production. In two years I only had about 60 days without a gig, rehearsal, or session. I was wearing myself out because I just wouldn’t take a break. Coming back to school and having set hours for working, studying, practicing, exercising, and eating allowed me to experience the feeling of “leaving the office.” Before I came back to school I just hadn’t figured that out yet. Having a stopping point helped me to be MORE productive, which admittedly was counter-intuitive at first.

Do you have any advice on finding creative ways to balance a freelancing career, arts leadership endeavors, and school?

Balance really is the key word there, and I can’t speak to what might work for other people. I guess if I compare it to physical balance I could say that it is about 80% personal. I have to figure out what feels right, and it sometimes also helps to ask someone else for their perspective. I’m constantly asking people about their schedules- what works for them, how they keep things together. And I’ve had to strike out this idea that everybody gets everything done all at once every single day. For me, there are periods that are more focused on performance and practicing and periods that are more focused on other things. I think the real key is just making the most of the time and energy I spend. If I focus hard enough, there is always a top priority and there is also something that I am more inclined to do. So sometimes I am doing what needs to be done, and sometimes I am doing the work that is presenting itself while it feels right and I will be the most productive with it. For example, scales and warm-ups work best for me in the morning, and composing and creative practice works best for me at night. Office work, correspondence, and organizational work are best when I knock them out in chunks throughout the day.

If you had to recommend one ALP course to Eastman students, which one would it be and why? Do you have any advice for current students?

This is a really tough question. My first thought would just be to take every course that interests you. They don’t add to your tuition and you can always find time for them if you really want to, especially with the new online courses. I benefited greatly from focusing on what I believed in and how I wanted to express it, so I would have a tie for the two classes that helped me with that – Jim Doser’s “Leadership Issues In Music” and Mark Powell’s “Funding The Individual Artist” course. I would be remiss if I didn’t also say “Keys To Healthy Music” as well, because that course is invaluable. I essentially took it twice, and I would take it again.

How have you, as a student, found ways to promote the cause of facilitating social change through music?

First off, let’s agree that as long as we are facilitating music in the world we are contributing to social change. We are combating apathy and providing influence that might allow people to live and make decisions out of love and optimism and understanding. So the first part of the equation for me is solidifying the tenets of my character that I am striving for so that I can live and perform with conviction and a sure sense of purpose.

I believe that there are no insignificant interactions. There is an opportunity to positively or negatively affect my environment every time I talk to someone or have a rehearsal or class and I have to make a choice constantly. As a musician, a large part of affecting social change is affecting the people around you. One of the primary ways that I try to affect change in what I do is by lending great attention to how I communicate a message. I am deliberately optimistic, borderline deliriously optimistic. The radio show that I produced for Eastman was one means of communicating my perspective on what held value and was worth promoting, and I am now starting my own podcast to try to focus on the challenges that go into music-making apart from making music. I also got involved with ALP, the UHS physical therapy office, Music For All, educational workshops, the Eastman Gig Service, and quite a few other music/education initiatives at Eastman and in the Rochester area. I joined a crop-sharing association through Peacework farm that introduced me to different members of the community and taught me about some of the other food-based community programs that were available. Rochester also has a very active DIY scene, visual artist community, and social justice infrastructure. As I mentioned before, often the first challenge for me is just to find out that something is there. Knowing about these things will allow me to connect dots between other interested students and these organizations, and hopefully to be more involved as time and opportunities allow.