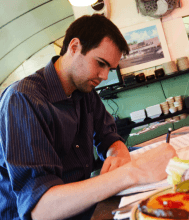 Mike Conrad received his Master’s degree in Jazz and Contemporary Media at ESM in 2013; he now teaches band, jazz band, music theory and jazz improvisation at Waterloo West High School, and continues to write for and lead COLOSSUS Central. As a composer he has recently received a Downbeat Award for his big band work, “West Point”.

You recently received a DownBeat student music award for your composition “West Point”. What were the circumstances that led to your writing this work?

In 2012 I submitted an application to The West Point Jazz Knights Composers Forum. When I found out that I was one of the three participants selected, I decided to write a new piece to bring to the Forum. I researched the band online a bit, so that I knew what kind of a group I was writing for. I wrote “West Point ” in May of 2012. The Jazz Knights played the premiere performance of it at the West Point Jazz Knights Composers Forum Finale Concert; I was the conductor. The concert took place at The Falcon in Marlboro, NY on June 16th, 2012 and featured the music of Darcy James Argue as well as pieces written by each of the three Forum participants. (I’m not sure, but I don’t think that the Jazz Composers Forum is still happening every year). Since the premiere performance, “West Point” has been played several times by Colossus, a large jazz ensemble that I co-lead. It was also recorded on Colossus’s debut album.

When I wrote “West Point,” I had never been there before. It wasn’t the case of going there, being inspired, and writing a piece based on my experience there or something like that (though it was very beautiful). I was excited to be given the opportunity and was very eager to work with Darcy James Argue and the band. I guess the piece captures some of that sense of excitement. I had been transcribing some of Dave Douglas’s compositions and improvised solos around that time, so I think some of his melodic language made its way into “West Point.” I also had been heavily studying and rehearsing the music of Gil Evans in preparation for the Eastman Chamber Jazz Ensemble’s performances at the Umbria Jazz Festival in Perugia, Italy. I tried to incorporate some of the elements of Gil Evans’s way of getting interesting and unique colors out of the ensemble. He liked to score unlike instruments together, use different muted brass and woodwind combinations, etc. Some of my biggest influences as a composer are Duke Ellington, Billy Strayhorn, Igor Stravinsky, Bela Bartok, and Bob Brookmeyer, as well as the two composers I mentioned before – Dave Douglas and Gil Evans.

You were one of the three composers/arrangers who led the big band COLOSSUS before you left to teach in Iowa – what are some of the challenges of composing for, playing in, and handling the logistics of a group so large, and how did you work through those challenges?

While COLOSSUS presented some big challenges, I was extremely fortunate to have Levi Sealua and Dave Chisholm to help me work through those challenges. We had a kind of “divide and conquer” approach, which worked really well. For example, Dave did a lot of the booking and promotion; Levi organized the set lists and made sure that all the members of the band were being featured appropriately; and I set up the rehearsal time/space and got the recording session together for our album. I loved working with those guys, and I’m definitely missing them now. I am currently running a big band (by myself!) in Iowa, and the biggest challenge is proving to be trying to deal with the busy schedules of 17 of Iowa’s most active musicians.

I LOVE working with the jazz bands. I direct two jazz bands, and I am having a great time teaching these students about this great music, turning them on to amazing recordings, helping them explore their creativity through improvisation, and polishing their ensemble skills. I also started a jazz improvisation class at the school, which is a blast. I am treating it in a similar way to the Jazz Improvisation for Non-Jazz Majors class that I taught at Eastman.  Conducting the Wind Symphony has been a new adventure, because I don’t have a great deal of experience with band music. I am getting more and more comfortable, however, and am enjoying it.  The biggest challenge with this job is that it takes up most of my time and energy. At Eastman, I was constantly writing music and playing in various ensembles in and out of school. Now if feels like I barely have time to even play gigs on the side. My creative output as a composer has been very limited this year, and I’m having a hard time getting used to that. I hope to be very productive in the summer!

As a jazz composer who incorporates instruments not native to the genre and has arranged a movement of Bartok’s Concerto for Orchestra, you obviously have a healthy appreciation for other music outside of jazz; what is it that you think makes jazz uniquely valuable to the community (yours or anyone else’s)?

Jazz is a uniquely American art form and an important part of our heritage, which should be celebrated. I think the most important thing about jazz is the element of improvisation. Jazz offers the audience the chance to experience the unexpected. In this music, spontaneity, interaction, and originality reign supreme.  I think that jazz has the power to inspire musicians and non-musicians alike. The raw energy that can be generated at a jazz performance reaches listeners who may not even have any idea what is actually going on in the music. At the same time, the high level of sophistication in the language of jazz is something that young musicians can aspire to. I remember being obsessed with learning how to improvise and play jazz. I checked out every jazz CD I could find in my public library and began to learn as much as I could from the recordings. It gives me great pleasure to now help lead students to discover their own passion for jazz.

Mike Conrad is a composer, improviser, educator, and music lover. He has been commissioned by the West Point Army Jazz Knights, the Penfield Music Commission Project, and the New York Youth Symphony Jazz Band, which debuted his composition “Mild, Mild Midwest” at Lincoln Center in December 2012. He also arranged a piece for string quartet that was performed as part of Barack Obama’s Inauguration in Washington, D.C. in January 2013. He has been honored for his arranging and composing with awards from Downbeat Magazine, the West Point Jazz Knights Composers Forum, and Ithaca College’s Jazz Composition Contest. More recently, Conrad’s arrangement of “Come Sunday” was selected as the winner of the Carnegie Music Exchange’s Arranging Ellington Competition, and was premiered at Carnegie Hall in March of 2014.  Conrad graduated with a Master’s Degree in Jazz Composition and Arranging from the Eastman School of Music, where he studied with Bill Dobbins and played lead trombone in the Eastman Jazz Ensemble. Conrad has performed all over the world on both trombone and piano. One of his favorite performing experiences was playing the music of Gil Evans at the Umbria Jazz Festival in Perugia, Italy.  At Eastman, Conrad taught a collegiate jazz theory and improvisation course for non­jazz majors as well as theory and improvisation classes through the Eastman Community Music School (ECMS). He received the Jack L. Frank Award for Excellence in Teaching from ECMS. In the summers, he has taught jazz at Birch Creek Music Performance Center, and several other summer music camps. Conrad now teaches at West High School in Waterloo, IA, and keeps busy as the leader and composer for COLOSSUS Central, a large jazz ensemble that plays new and original music.