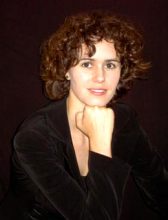 Matilda Hofman’s conducting work ranges widely from opera and the symphonic repertoire to contemporary music, of which she is a keen advocate. She received an ALP Special Opportunity Grant to attend a five-day symposium with the Winnipeg Symphony Orchestra.

ALP Special Opportunity Grant Winner and Masters of Music Candidate, Matilda Hofman’s conducting work ranges widely from opera and the symphonic repertoire to contemporary music, of which she is a keen advocate.

She has worked in festivals and masterclasses with numerous orchestras and ensembles in the UK (including the BBC Philharmonic, the Scottish Chamber Orchestra, London Symphony Orchestra, Nash Ensemble) and the United States (Rochester Philharmonic). She has recently performed her debut with the Winnipeg Symphony Orchestra in their New Music Festival, which was broadcast on CBC radio.

Matilda is Music Director of the Kreisler Ensemble, a contemporary group in England which has performed all over the UK to critical acclaim.

At the Eastman School of Music, she works regularly with numerous ensembles, and is assistant conductor with the Eastman School Symphony Orchestra. As Music Director of the New Eastman Outreach Orchestra, she has initiated relationships with inner-city schools, including a year-long project with the School of the Arts and other projects which take classical music into the community.

Past positions have included assistant conductor of Southbank Sinfonia, with whom she conducted many concerts, prepared them for performances with Vladimir Ashkenazy and prepared and conducted Le Nozze di Figaro.

Other operas conducted include Cosi fan Tutte, The Turn of the Screw and Albert Herring.

I was awarded a grant to participate in a five-day symposium with the Winnipeg Symphony Orchestra. As well as having opportunities to work with the orchestra, and to learn from some great conductors, we had daily sessions on many other aspects of being a conductor and a music director. These included sessions on programming, sessions with an acting coach, an agent and a music critic.

What did you gain from this experience?

A huge amount! One of the great things about the symposium was the interaction with a wide variety of people from the orchestra, including their music director, executive director, manager of artistic operations, music advisor and members of the orchestra. Through the various sessions they gave us a real sense of how an orchestra works from the inside, and how the various departments interact. The discussion with an agent was tremendously useful in giving a good an understanding of the artist-agent relationship, and gave us ideas on how to get started in the profession. With the critic we discussed the relationship of artistic organisations and the press. Every morning we worked with an acting coach, which was fantastic for improving communication, and developing an inner confidence and integrity about our work. During the sessions with the orchestra we got very useful feedback from the members of the orchestra as well as the conductors.

Describe the process behind obtaining this grant.

Once I heard that I had been accepted into the symposium I contacted Leslie Scatterday to see if I might be eligible for funding. I sent her as much information as I could about the symposium, and she encouraged me to apply. In the application I gave a break down of anticipated costs, as well a description of the symposium, and why it would be beneficial.

How was your experience in the Arts Leadership Program been beneficial to you?

It has broadened the way I think about music business, and the future of music. It has also given me opportunities to work on skills which are vital to becoming a successful professional musician today, but which are not addressed in a regular college curriculum. This has included classes on orchestral programming, communicating with audiences, and discussing the future of classical music. Knowledge and understanding of these issues, and having these kinds of skills is absolutely vital, and it is wonderful that ALP gives us the opportunity to study these things. I did my internship in Artistic Operations at the Baltimore Symphony. It was fantastic to work within such a high-quality organisation and to gain understanding about how they approached different issues and solved different problems.

How are you preparing yourself for a career in the arts?

First, I work as hard as I can to always become a better musician and conductor! I also try to meet a wide variety of people within the music profession, to stay in touch with them, and to learn from their experiences and advice. I glean information from as many different sources as I can about how different organisations are adapting to the rapidly changing music world. I am always trying to think of new ways to reach audiences whether it is by innovative ways of programming new music or by outreach work. I also try and find out as much as possible about what music my contemporaries are writing, from all over the world. It is our responsibility to be eloquent advocates for the music which is so important in our lives, and to make it vital to the lives of the wider community.

The job of a music director is broader than it ever has been in the past. Not only must he/she be a musician of the highest quality, who is able to inspire musicians to give their best performances. He/she also has to be an able communicator with audiences of all different ages and musical and cultural backgrounds. Frequently job descriptions for assistant or resident conductors will list the ability to communicate with audiences and the community at large as a necessary qualification before they list the musical qualifications required! Conductors of our generation have the obligation to understand the role of classical music in the future, and have the ability to connect it meaningfully to everyday lives. We need to be the kind of leader that will not only be “musician’s musician” but who will also be successful at interacting within the infrastructure of an orchestra, including the board of directors, and someone who knows and understands the community within which he/she works. The days of just coming in to conduct and then leaving are gone!