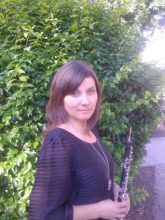 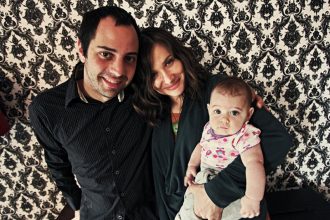 John Altieri (B.M., Tuba) and Christa Robinson (B.M., Oboe) are a musical power-couple. The two accomplished musicians live and work in New York City with their young daughter, juggling the demands of their careers and parenthood. Both are graduates of the Arts Leadership Program.

Hailed by Broadway World as graceful, sensual, and modern”, and Prescott News as a “cross between sonorous classicism and adventurous groove and squawk,” Altieri’s music has been performed by the Saskatoon Symphony Chamber Orchestra, the California EAR Unit, NOW Ensemble, the Prism Brass Quintet, the Y Trio, the Penfield Commissioning Project, and other musicians and soloists at festivals and venues such as Tanglewood, Aspen, Bowdoin, Bang On A Can at MASS MOCA, S.W.Tuba Conference, Eastman, Mannes, Oberlin, U of Maryland, U of Arizona, HERE Art Center, Loyola University, and the Brooklyn Conservatory to name a few. His 30 minute modern dance work, “My Words Turn to Song in Your Fists”, has been produced on two different occasions resulting in sold out runs in New York at the Here Art Center as part of their American Living Room Festival in 2005, and at the Marroney Theatre in Tucson, Arizona in 2002. His orchestration of Carter Little’s film score for “The Living Wake” which had its five star premiere at the Cinevegas Film Festival in 2007 was praised by “Variety” magazine, calling the score “ideally captive of the eccentricity.” He has twice been featured as an emerging composer with the California EAR Unit’s Circuit Breakers Concerts in 2002 and 2005. Twice a finalist of ASCAP Composer Awards, John’s work has been spotlighted on NY radio as part of the Brooklyn Composers Collective” concert held at the Brooklyn Conservatory while his other film scoring for short films “Almost Home” by John Rubin and “Love is Hell” by Dave Dormon have appeared at festivals across the U.S. and abroad. The NY Times recently photographed him as conductor of Missy Mazzoli’s new scores for Alice Guy Blache’s turn of last century’s silent films, claiming the scores to be “engagingly idiosyncratic.” He appears as conductor of Josh Sitron’s score for FOX TV’s new series “Allen Gregory” as well as on William Brittelle’s “Mohair Time Warp” recorded for the New Amsterdam Records Label. He has conducted the Bolling Air Force Band as an audition finalist in addition to the California EAR Unit, Bang On A Can MassMoca Ensemble, University of Rochester Wind Ensemble, and chamber and orchestral works at Eastman School of Music, Aspen Festival, Bowdoin Festival, HERE Art Center, University of Arizona, BAM Cafe, Issue Project Room, Tonic, Galapagos Art Space, Roulette, and the Renee Weiler Concert Hall among others. As tuba player, John received a coveted Performer’s Certificate from the Eastman School of Music for his adventurous and virtuosic solo tuba performances and has since gone on to perform with David Byrne, St. Vincent, Macklemore & Ryan Lewis, Red Baraat, Foster the People, Alarm Will Sound, Brandt Brauer Frick, Rubblebucket, Slavic Soul Party, Brooklyn Brass, Huis Ten-Bosch Quintet (Nagasaki, Japan), Bang On A Can Marathon and Mass Moca, and carries the honor of being the first ever tuba soloist at the Bowdoin Festival in summer 2002 since its inception in 1975.

As teacher, John has taught at Hunter College, University of Arizona, Mannes Prep, Juilliard Prep, Williamsville East H.S., French Road E.S., Tucson Unified School District, Brooklyn Steppers, Meyer Levin School of Performing Arts, and the Academy for College Prep/ Erasmus High School. John was also the American Composers Orchestra Director of Education for the 07-08 season. He holds a B.M. from the Eastman School of Music and an M.M. from the University of Arizona. He has studied composition with Sydney Hodkinson, Samuel Adler, Dan Asia, and Dan Coleman; conducting studies with Brad Lubman, and tuba with Don Harry and Cherry Beauregard.

What advice do you have for students who are also seeking to develop skills in areas other than performing, like conducting and composing? How do you diversify your skill set while maintaining a high performance level?

It might be looked at as more of an “inclusion” approach at first. Seeing the larger picture and all the natural interconnections between performing, conducting, and composing is a good place to start. For example, sitting in an orchestra playing your respective instrument’s part can be supplemented by score study. Some of the best orchestration lessons available occur when sitting in rehearsal for hours listening to resultant sounds and “seeing” how they are achieved. After you have discovered the common ground amongst these disciplines, it becomes a “time management” issue—maximizing your 24-hour “slots” so that each day is filled with furthering your creativity and artistry across each skill set. Reflect on when you were most happy and productive and put yourself in a position to replicate that on a daily basis.

You recently went on tour with “Love This Giant” with David Byrne & St. Vincent and Red Baraat. What is the most fulfilling part of touring? How do you feel that different audiences respond to the live performances you give?

The most fulfilling part of touring is performing. While the perks of getting paid to see the world and meet people enrich my life, I am most fulfilled by having the opportunity to, night in and night out, create musical moments with those on stage and to unfold written or improvised music. While audiences around the world do have different reactions to live music, positivity pervades as a dominant energy emanating from the concert halls, festivals, or clubs that I’ve played in. A city’s population and why they live there will influence an audience’s reaction to a degree, but ultimately, regardless of culture, innate sensibilities of musicality shine through.

What inspires you to compose music and what is the most rewarding aspect of this creative process? Do you feel this informs your performing career?

For me, inspiration to compose can come from anywhere. Conversations, nature, accidental sound gestures, poems, images, discovering a chord progression, motif, or melody; a title, an instrumentation, a concept… I try to be open and in tune with all moments and stimuli as possible music. … And yes, not only does composing inform performance, but in a freelance world (and in all styles other than classical music) musicians usually perform their own music. If I’m asked to write film music for instance, I usually have to conduct it or perform it through keyboards and instruments. Such work is only possible through a multi-faceted approach to composing, conducting, and performing.

I grew up on a pig farm in rural Ontario, Canada, and although my family appreciates music (and can boast some killer 3-part harmony/road trip singing skills), the idea of becoming a professional musician had never really occurred to me. A family move to a Toronto suburb altered that idea. Admittedly, I agreed to play the oboe at the age of 13 without actually knowing what it was, but I greatly admired my early teacher and soon fell in love with the oboe and the classical music world. Lucky enough to be accepted by the Eastman School of Music for undergraduate studies, my idea of classical music evolved as I began to perform newly composed music. With ample performance opportunity and inspiring colleagues, how could I not love exploring these new sound worlds? …And then I won a traditional orchestra job in Canada. Whoops. Immediately out of college, I picked up my reed tools and moved back to Canada where I put down roots (literally-I grew some killer green tomatoes!!!) in the middle of the prairies and performed as the principal oboist of the Saskatoon Symphony Orchestra. Additionally, I taught oboe at the University of Saskatchewan and early childhood music through their extension division. Although it was a blast playing the classics for five years, there wasn’t much of a new music scene, and it was missed. I followed my romantic heart and moved to New York City. I couldn’t be happier to be in a city filled with so much energy and am elated to be a member of Alarm Will Sound. When I’m not playing the oboe, you can find me teaching elementary classroom music or day-dreaming of a backyard where I someday can plant a tomato garden once again.

In your biography for Alarm Will Sound you wrote how you left a traditional orchestra job in Canada because you wanted to pursue a contemporary music scene. What piece of advice would you give students if they find themselves unfulfilled by their current career?

I hold the five years in Saskatchewan as principal oboe of the Saskatoon Symphony Orchestra very close to my heart. I had wonderful colleagues and developed some deep friendships there. It was a great place to experience the “real life” of an orchestral musician. In addition to weekly concerts, I was involved in programming, the players committee, contract negotiations and community engagement, experiences that have proven themselves useful as a NYC freelance musician. When John and I decided to get married, one of us had to move. New York does have a vibrant contemporary music scene, and I am honored to be a small part of it, but initially, I moved to NYC for love.

In addition to your diverse performing career you teach early childhood music. How did you become involved in this? Do you feel this teaching perspective informs your varied performing career?

I became involved in teaching early childhood music through the Community Music Education Division at the Eastman School of Music. For me, the joy of making music with children is difficult to express. It’s fun, it’s creative, and sometimes it’s downright silly-and that’s what I love about it. I try to tap in to that joy when I am performing.

Both of you are very invested in new, contemporary music. How did you get involved with such a variety of contemporary groups?

The notion of labeling music is nearing the end of its usefulness. The term “new” music was helpful to concert goers for the past fifty years and helped prepare them to hear something other than romantic or classical in nature. Now, new simply means new, the same as it does when referencing a car or house or more importantly, events and endeavors of today. It would be irresponsible and almost impossible to undertake artistic intention without knowing the today, the now, and all its passions.