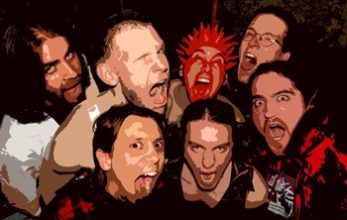 Started at Eastman and made up of all Eastman alums, Jerseyband saxophonist Alex Hamlin talks to us entrepreneurship and lungcore.

What does a screaming hardcore metal vocalist have in common with a jazz trumpeter?

For Jerseyband, it is one in the same. The band’s unassuming trumpeter, Brent Madsen intermittently pulls the horn from his lips just long enough to let out his version of an ape on a rampage. One moment, Madsen screams, “Move my carrot!” and the next, your head is spinning because Jerseyband has already exchanged the gates of hell for a jaunt in Peewee’s Playhouse. Backed by drums, electric guitar, and guitar synth, Jerseyband’s horns (three saxophones and a trumpet) cut through meaty arrangements that shock their audiences into submission. Enthusiasts have compared their sound to Mr. Bungle, Zappa, and Meshuggah but one thing is clear; this band is best categorized under their own genre of horn driven metal called Lungcore.

While in Rochester, Jerseyband will present a lecture/performance titled:

“entrepreneurship and lungcore:
how to produce your own original music in the era of the mp3”

The same night, they will be performing at Rochester’s Bug Jar that evening at 10:00.  For more information, visit www.jerseyband.com.

We had the chance to catch up with Eastman Alum and Jerseyband saxophonist Alex Hamlin.

Can you give us a brief history of the creation of your band?

The band started at Eastman in room 624 of the annex after a jazz improvisation class in 1999.  We were only six in number then: trumpet, 2 tenor saxes, baritone sax, synthbass/rhodes/turntables, drums.  We have since swapped the keyboardist for a guitarist and bass guitarist.  The impetus for forming was casual; Ed’s (tenor 2) father had arranged some gigs for him to play in his hometown of Cape May Court House, NJ for the coming summer.  We were just playing around after class one day when Ed thought that we could be the group to play those gigs in Jersey that summer.  And thus came forth the working title of the band, “Jersey”  The working title stuck and we added “band” to the name because a rock band already existed that used “Jersey” as their name.

What drew all of you together to fuse two very different kinds of music?

In the beginning, our attitude was, “Every style and genre has great merits that can be learned from and appreciated”.   At first, we allowed ourselves to genre-hop song to song and most of the time even within the same song – it was about being adventurous, spontaneous and fun.  The band served as a forum in which all of us felt free to experiment with our compositions.  It was through this practice that we arrived at our method of combining Metal with the traditional instruments of Jazz.  By exploring multiple styles of music we found out what styles that we enjoyed experimenting with the most.  In turn our writing became more specific in terms of its overall sound. Also, our mutual appreciation for the Swedish band Meshuggah drew us closer to metal style. In that realm, that band was a great influence on our compositions and sound.

After leaving school, how do you keep the band together and viable?

Perform as much as possible

Shows are your greatest opportunities for finding new fans which are your bread and butter.   And one of the best ways of getting in front of new fans is by sharing a show with artists who sound similar to you and are better known.   Early in Jerseyband’s history when we were trying to get a gig at a local club that would never give us one, we got our foot in the door by being the opening act for a better known artist, Eastman Alum, Tony Levin.  As a result of that show, we added a significant number of local Rochester fans to our list that would have otherwise never ever known about us.

A recording of your band is the best thing beyond a live performance for building an audience and getting gigs.  People will not book you for shows unless they’ve heard you first so this is essential for a band to have.

Create and maintain a web presence

Creating a web presence whether it is a regular website, social networking web page, maintaining an email list of your fans, or preferably all three has proven to be very helpful. Because of our presence on the web people from around the world have bought Jerseyband CDs and MP3s.  Just last week, three people from Tokyo, Finland, and France bought our CDs.

We always try to present new music with each successive concert that we put on because it gives fans a reason to keep coming back to our shows.  The writing process prevents a group from becoming stale in its creativity and generates more material for each recording project.

Look for alternative sources of funding

One year, Jerseyband served as artists-in-residence at nearby college called Keuka College.  This sustained the members of the band for almost a full year.  It was a very productive time for us because we all lived together and worked around the clock for the music.   We made two CDs while in residence, “Christmasband” and “JAKE”, which we still sell at our shows to this day.

Everyone needs to be clear on how much personal time they are willing to devote to the band, what they expect from the band, and where they see the band going in the future.   And that needs to be assessed again every couple of months.   Keeping these terms in check prevents a lot of tension from forming between band members over various band issues and gives everyone a common goal to work towards. From a logistical standpoint, Jerseyband uses phone conferences, email, and a monthly rehearsal to keep ourselves on track.

What’s been the key to this band’s success? What will be the key to future success?

Each member’s commitment and their love for this music which we make as a collective has been unwavering and essential to the survival of Jerseyband.  The development of all five of Jerseyband’s CDs and the bands presence on the internet has played an important role in its own success.  It is the recording in many cases that has served as a great introduction to new listeners and fans of Jerseyband which includes those who invite us to play at their clubs, music festivals, and colleges.  The internet has proven to help us tremendously in the realm of promotion, selling CDs, and building a fan base outside of our locality of New York City.

I believe that the internet will continue to have an important role in determining future successes for the band.  It is the most inexpensive and effective tool we have for promoting ourselves.  The most important key to the band’s future success is in the new relationships that we will form with people globally and locally – and the internet really helps us do just that.

In what other projects are the members involved?

I have been freelancing on saxophones and woodwinds in the NYC area in addition to doing some tours.  Recently, I did a European tour of Grease the Musical as well as a Ray Charles music review show band in Monte Carlo, Monaco and Mumbai, India. I’m also producing, recording, and mixing a demo CD for Amy Lynn and the Gun Show based out of NYC.  Ted Poor tours with trumpeter Cuong Vu frequently in Europe, America, and East Asia.  Ed RosenBerg private teaches in composition, music theory, saxophone, woodwinds and is just finishing up a masters degree in composition at Queens College.  Brent Madsen is finishing up a masters in classical trumpet performance at the University of Maryland.   Mike Chiavaro is involved in multiple rock projects in NYC including the Knights On Earth, Bacci, Keith Ward, Christine Hagan, The Exit, Bell and is authoring a electric bass lesson book.   Ryan Ferriera plays guitar with Antibalas Afrobeat Orchestra and Alarm Will Sound, and also works as a freelancing recording engineer.

What are some important concepts of which a budding freelance musician must be aware?

As they always will tell you, “Be nice, be competent on your instrument, and be professional”.

Always return phone calls, emails, and text messages immediately and at the very latest within 24 hours of someone’s initial contact with you.  In email responses make sure you’ve answered all of their inquiries and that your email is succinct and polite.

Be early to rehearsals and gigs make it your goal to be the first one there.  Punctuality is always appreciated and is respectful for the people organizing the gig and for the people you are playing with.

Learn more about the music genres that you are currently less familiar with.  This will open you up for more gig opportunities.

Whatever you do, don’t gossip, don’t complain, and don’t bad mouth on a gig.  This is especially important on long tours. The music world is very small and that sort of negative energy will work against you.  It is all about the attitude and or energy that you put into every gig that you do.  Simply put, positive and constructive musicians work more than their negative counterparts.

Make business cards that have your name, one email, one phone number, website, and what instruments you play.  People will use those cards if you actually give them one.

The internet is your greatest friend.  Have an “online press kit” together.  This should contain some press-worthy photos of yourself and/or band, a biography, music and video clips of you performing, important contact info, and a listing of where you are going to be performing.  If you don’t already, you should have a few “social networking” web pages up on the internet that depict you as a healthy, smart, competent, and fun musician. If you already have your online press kit together, it is easy to set up these social network pages (i.e. MySpace, Facebook, YouTube, Bebo, Garageband, Virb, etc)

What are some of the challenges you have faced as an artist?

I think the hardest challenge I’m faced with as an artist is eloquently describing my music to those who aren’t musicians and getting them excited about it.

What is the essence of lungcore?

For me, the essence of Lungcore is best understood from an orchestration perspective. The resonance created by the lower range of the trumpet, tenors and baritone saxes lies at the root of this idea.  In this lower range of the horns we use open and dissonant intervals in a rhythmic fashion which comes across as woody, guttural, and huge.  When I write for this section I think of it as if I’m writing for one gigantic distorted baritone guitar!  Also, I think it is about using the horn section as the focus of the rock group and as the main deliverer of the song content.

We have a bunch of music that has not yet been performed.  So we are in the process of getting all of the new material rehearsed and memorized.  Fortunately, we have been invited to perform this August at a festival in Austria called the Saalfelden Jazz Festival. This will be our European debut and we are currently working towards booking some additional European shows around that event.