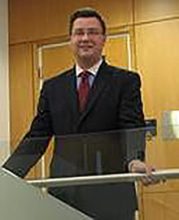 Eastman alumnus and Arts Leadership Program Certificate recipient, Eric J. Goldman earned a bachelors degree in bassoon performance, as well as a Certificate in Arts Leadership from the Eastman School of Music. Eric was one of the first students awarded an externship grant from the ALP, which he used to fund a development internship with the Academy of St. Martin in the Fields, London. This paved the way for his very successful career in fundraising.

What skills did you develop in the ALP program that serve you well in your professional life today?

Every Arts Leadership Program (ALP) class I took, lecture I attended, and internship I worked has shaped my current skill set.  Collectively, these experiences added a different, vital dimension to my Eastman education as a bassoonist.

Specifically, the ability to think creatively and “dream big” was something I honed in the ALP program.  These skills, essential to effective fundraising, were at the core of a terrific class I took with J.B. Van Demark and Amy Blum.  Joseph Horowitz, the former music critic of the New York Times, demanded that we present well-reasoned, pithy and persuasive arguments in both written and oral form, using his Understanding Toscanini as the seminar’s textbook!  I definitely use those skills every day.

Do you think a lot of the skills and abilities that musicians develop can be easily transferred and applied to other professional careers?

Yes, there are many transferrable abilities and skills.  For example, if you can practice one measure of music for three hours, you are probably an astute enough listener to figure out what someone is really trying to tell you over lunch. An unwavering discipline, commitment to quality, and obsessive attention to detail is also applicable to many, many professional ventures.

Musicians—thanks to the many hours spent in chamber music and orchestra rehearsals—are exposed to a wide variety of people and personalities.  The same is true with an office.  You must be diplomatic.  You must be a team player.  You do not have to like each other, but you do have to produce a stellar product, whether it is a critically acclaimed concert or a successfully negotiated contract.

How important do you think it is for musicians to develop entrepreneurial skills and take charge of their own careers?

There is no question it is absolutely essential; the more tools you have in your professional toolkit, the better. I am delighted that the Eastman Institute for Music Leadership is leading the charge.

What advice would you give to current ALP students?

I owe so much of my current success to the Eastman School of Music and the Arts Leadership Program.  Thanks to an ALP externship grant, I was able to start a career in development with an internship at the Academy of St. Martin in the Fields in London. Only at Eastman could a young bassoonist from Indiana end up at one of the world’s finest orchestras.

My advice to current ALP students?  Take full advantage of every single opportunity that Eastman and the ALP provides.  Do several internships—figure out what you like, do not like, and why.  Take every class you can at the ALP.  Cultivate outstanding relationships with your advisors, teachers and fellow students.  Stay in touch with them after graduation.  Always carry business cards and a pen.  If you don’t have business cards, get some made (www.vistaprint.com).  Manners matter: say “please” and “thank you” often.  Work hard and work strategically every day.  Be a man or woman of your word.  Live every day as if it would be your last.

While at the Eastman School of Music, Eric studied bassoon with Mr. John Hunt and Mr. K. David Van Hoesen.  He also completed internships in the Eastman Office of Public Relations and at the Rochester Philharmonic Orchestra—all while earning an Undergraduate Certificate from the Catherine Filene Shouse Arts Leadership Program (ALP).  One of the first-ever ALP externship grants allowed Eric to work in the development office of the Academy of St. Martin in the Fields, London.  Eric completed his formal training in bassoon at Trinity College of Music, London, and Carnegie Mellon University, Pittsburgh.

Outside of work, Eric enjoys gourmet cooking, traveling, and exploring the Washington cultural and culinary scene with his girlfriend, Lauren.  He was elected to the membership of the University Club of the City of Washington DC in November 2008, where he presently serves on the Club’s International Committee.