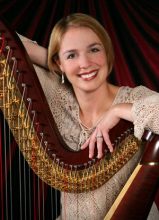 Courtney Hershey Bress earned a Bachelor of Music degree, Performer’s Certificate and Arts Leadership Program Certificate from the Eastman School of Music. She joined the Colorado Symphony Orchestra as Principal Harp in September 2001. Ms. Bress is also the Principal Harp for the Cabrillo Festival of Contemporary Music (Santa Cruz, CA).

Eastman alumni and Arts Leadership Program Certificate recipient, Courtney Hershey Bress joined the Colorado Symphony Orchestra as principal harp in September 2001. She has appeared with the orchestra as a soloist on numerous occasions. Bress has been playing principal harp with the Grand Teton Music Festival since 2007. She held the principal harp position with the Cabrillo Festival of Contemporary Music in Santa Cruz, California from 2002-2006. Other previous positions include principal free-lance harp with the Singapore Symphony Orchestra, substitute harp with the Chicago Symphony Orchestra and principal harp with the Civic Orchestra of Chicago. From 1997-2000 she performed as principal harp in the United States Army Field Band in Washington, D.C. and toured the 48 continental states, playing concertos and concerts. She has performed for the American Harp Society and the World Harp Congress. In addition to her private teaching studio, she gives master classes throughout the United States and has served as a juror for the American Harp Society National Competition. She held the position of artist and clinician for the Midwest Harp Festival in Tulsa, Oklahoma from 2002-2007. Bress was a 2005 GRAMMY® nominee for her performance of George Crumb’s chamber work Ancient Voices of Children. Bress earned a bachelor of music degree, performer’s certificate and Arts Leadership Program certificate from the Eastman School of Music and she received her master of music in orchestral performance from the Chicago College of Performing Arts, Roosevelt University. Her teachers include, Kathleen Bride, Sarah Bullen and Gretchen Van Hoesen. Her husband, Steve Hearn, is the newest member of the Colorado Symphony Orchestra percussion section. They both love living in Colorado with their golden retriever, Zen.

Why did you participate in the ALP program?

I participated because I wanted to learn as much as I could about the music world outside of just being a good musician.

What are the most important skills you gained from the ALP program?

I learned many things from the program such as, the business of music- learning how to do my taxes, promoting myself, and talking to an audience. I have definitely taken these qualities with me in my career. When I was freelancing I used all of my skills from ALP to promote myself. As a solo performer, I always talk and connect with my audience so that they enjoy the performance more.

What is the biggest obstacle classical musicians face today?

As an orchestral musician in the 21st century, I know how important it is to connect with the audience. We live in a world where orchestras are struggling to survive and we need to reach out to our audiences by talking to them and making them a part of the experience. There should be less separation between the formal stage and the audience.

Why should young musicians participate in the ALP?

The ALP at Eastman is very important to the young musicians going out into the world today because the music industry is very competitive and hard to survive in. With the extra knowledge that one can gain from the classes offered through ALP students will be more prepared to succeed in the music industry.