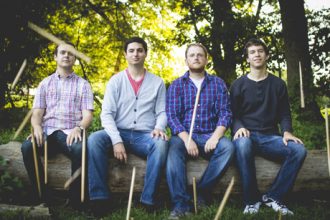 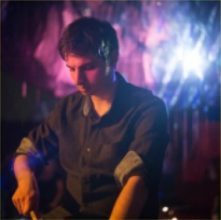 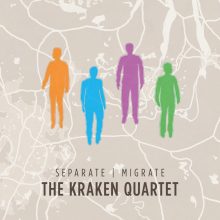 Chris Demetriou is obsessed with the intersection of acoustic and electronic sounds. A percussionist and performer, Chris is a founding member of The Kraken Quartet, a mass of drums and synthesizers that rides the line between contemporary chamber ensemble and indie rock band. Chris specializes in live-looping and sound manipulation, bringing these elements into his performance…

and composition. Interested in creating unique audience experiences, Chris served as Director of Outreach for OSSIA New Music, has collaborated with visual artists for gallery openings, and organized concerts centered around relaxation. Chris is a dedicated educator, and maintains a private studio in the Austin, TX area. He is also a member of the team at AllRhythms, an organization that provides music education in communities with limited access to arts resources. Chris holds a Master’s Degree in Music Performance from the Eastman School of Music, and Bachelor’s Degree in Performance and Education from Ithaca College. Additionally, he holds a certificate from the Arts Leadership Program at Eastman.

A massive force of percussion and electronics, The Kraken Quartet is a genre-crossing group known for its highly energetic and engaging performances. Since their formation in 2012, the Austin-based ensemble has been heralded for merging elements of math-rock, minimalism, indie, post-rock, electronica, and the avant-garde. The Kraken Quartet has been featured on festivals and broadcasts including South by Southwest, Fast Forward Austin, Audiotree Live, Austin Instrumental Music Festival, New Media and Sound Summit, Thin Line Fest, WNYC, KUTX, SoundSpace, and more. Holding education as an important part of their mission, the ensemble presents workshops and masterclasses centered around collaborative composition. Their debut full-length album, Separate | Migrate, will be released on April 28.

How did the Kraken Quartet form and how was the group able to stay together so successfully?

The four of us met at Ithaca College, and were members of the same freshman class. We were drawn together as friends first, sharing musical interests and aspirations. As our time together in school ensembles increased, we realized there was real chemistry between us in terms of performing. We started finding more reasons to play together, and eventually solidified as a group. Over time, we found ourselves drifting away from performing the music of other composers, and instead shifting our attention to writing music collectively. This became the main focus of the ensemble, and the idea of collaborative composition has largely informed our musical direction over the last few years. Not only has it been a blast writing music with my friends, but it has definitely played a large role in keeping us together as an ensemble. We have invested a lot in the group, and really feel like the members of the band and the music we perform cannot be split apart.

After finishing our time at IC, we found ourselves spread out across the country, attending four different graduate programs. We ended up getting together on school breaks to compose and perform as much as possible. When we were spread apart, we would send recordings of ideas back and forth. We were all dedicated to moving the group forward, and did not want to lose momentum. I think the key to staying together in our situation was making sure all four of us were on the same page. We all loved what we were doing, and knew we wanted to see how far we could take it. Even though keeping the ensemble running with such long interruptions was challenging, we decided early on that we would go back to being full-time as soon as possible. In the end that meant moving to the same city so we could rehearse regularly and establish a strong presence. We have been an ensemble for about 5 years now, and are still putting all of our effort into expanding our reach.

How were you able to so successfully fundraise for this project?

Our fundraising for the album was primarily handled through Kickstarter. Even before the official campaign began, we started reaching out to potential backers with personal messages. Although every backer received rewards for their contribution, that seemed less important to people than feeling like they were supporting a worthy project. With this in mind, our focus became spreading the word about our communal project. In the majority of our written materials for the campaign, we focused more on the story of us coming together and what the project represented rather than our mechanical and financial needs. For us, the recording was the culmination of a very personal journey, and putting this story in the forefront provided a more compelling reason for people to help us. We made phones calls, wrote personal notes, gave public thanks yous, and tried to foster a sense of pride in our backers. The campaign shifted to friends helping us achieve a goal rather than people giving us money. For anyone looking into crowdfunding a project, I would recommend exploring a similar strategy. Focus on your personal story and why your goal is significant. People like helping people.

Do you have any advice for current students on how to market an ensemble in a way that allows the group to leave the walls of music school and be successful in a real world scenario?

Music is a community industry. To be active as a performer in a music scene, you have to be active as a supporter. The first piece of advice I would give to students would be to go to as many shows as possible, and meet everyone you can while you are there. Chat with the performers, meet whoever organized the event, talk to other people hanging out in the crowd. Beyond this, make it a goal to start connecting with people involved in the music community. Reach out to presenters, performers, curators – ask if you could buy them a coffee and ask some questions. You will learn a lot from people who have been in your situation, and start building a network you can go to for support.

To expand your reach, you have to first establish who exactly you are trying to get your music to. There is no performer or style that absolutely everyone loves and wants to buy a ticket to go see. Your job is to figure out who would enjoy what you are doing. Maybe your target audience is people who love quiet sounds, or listening to video game soundtracks, or wants music to dance to at a bar. Once you have an idea who you want to get your music to, your task shifts to figuring out how to reach them. A great place to start is to check out other acts that your target audience enjoys. This does not mean tracking down performers that do exactly what you do, but rather acts that have a similar aesthetic, something compatible with but unique from your sound. See what venues they perform at and how they reach their fans. What blogs and newspapers cover them? What festivals do they perform at? What types of media do they create? The more you can make a presence for yourself in these places, the better. Even go so far as to try to organize events with these ensembles. When you team up with groups that share a target audience, both of your fan bases will grow.