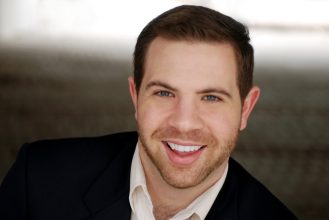 Eastman alumni and Arts Leadership Program Certificate recipient, Baritone Casey Molino Dunn has not only been lauded for his rich voice but for creating “very real, detailed characters” (Front Row Center) in repertoire that ranges from baroque and classical masterpieces on through today’s art music and crossover works.

Mr. Molino Dunn performances include lead and featured roles in Albert Herring, La Cenerentola, Céphale et Procris, La Finta Giardiniera, La Sonnambula, and Susannah. He is currently a Resident Artist at Manhattan’s Dicapo Opera Theatre. Casey has sung in Italy and China and previously performed with singers from the Metropolitan and New York City Opera companies as the Imperial Commissioner in the Mercury Opera/Rochester Philharmonic’s production of Madama Butterfly. As a musical theatre performer, he has been featured in Assassins, Children of Eden, Fiddler on the Roof, H2$, Jesus Christ Superstar, and Threepenny Opera. In October 2008 he shared the stage with Grammy-nominated singer-songwriter Tift Merritt and chart-topping pianist Simone Dinnerstein in a special get-out-the-vote concert in Missouri. His performances as a soloist with orchestra include Fauré’s Requiem, Handel’s Messiah, Monteverdi’s Vespers and Vaughan Williams’ Five Mystical Songs. He has given art song recitals throughout the East coast, sang the National Anthem at UNC-Chapel Hill’s Commencement, and presented concerts featuring his own compositions.

Casey recently received his Masters of Music degree from the Eastman School of Music, where he studied with Dr. Robert McIver. He also received an Arts Leadership certificate and was hired to coordinate the school’s Office of Careers and Professional Development, part of the Institute for Music Leadership. A member of Phi Beta Kappa, in the spring of 2005 Casey graduated with highest distinction from the University of North Carolina at Chapel Hill earning a Bachelors of Music degree as a student of tenor Stafford Wing, and a Bachelors of Arts degree in Communications. Actively involved with UNC Opera, Casey produced many performances and sang lead roles with the company; he returned to Chapel Hill after his graduation to produce part of the grand re-opening of Memorial Hall, the University’s main presenting house. His honors include awards from the National Association of Teachers of Singing and the Opera Guild of Charlotte (NC).

Described as the “quintessential multi-faceted musician” by Classical Singer magazine, in addition to teaching, Molino Dunn is active as a church musician, keyboard player, and an arts administrator. In the fall of 2008 he became the Director of Music at New Jersey’s Rutherford Congregational Church; he previously served as the Minister of Music at the First Presbyterian Church of East Rochester, NY. Hailing from Kunkletown, Pennsylvania, a small village in the southern Poconos, Casey now resides in New York City and freelances in the arts performance, teaching and business sectors. He also works part-time as a publicist at Christina Jensen Public Relations; the firm’s clients include a range of noted classical musicians.

Has your ALP certificate and training in the program proved useful and valuable in the professional world?

Yes, very much so. The Institute for Music Leadership’s range of offerings, especially the variety of Arts Leadership classes that I was able to take, has certainly given me an edge. I was able to expand my skill set and increase my understanding of how the arts world operates; consequently, I sincerely believe this has helped me design a rewarding career. A graduate assistantship at the Institute, which eventually led to a staff position, plus an internship with Mercury Opera Rochester during the company’s first season were also pivotal. Each offered invaluable hands-on experiences that have made me a better performer, teacher and arts administrator.

You are a multi-faceted artist with a varied career. How do you balance all of your associated activities?

I’m lucky to manage a fair amount of my schedule; while empowering, this often requires a good deal of planning ahead, especially in trying to maximize each day. Though I have some set hours for certain commitments (especially group rehearsals and teaching), for many jobs I determine when I will put in the necessary hours. As a result, I’m fortunate to have the flexibility I need to balance a range of activities, my own auditions, lessons, and coachings. But, like many performing artists, this can also mean that many workdays are quite packed. However, I don’t think that my career could be as varied without this setup.

While I certainly try to find work that excites me and is related to my passions, like everyone the bottom line does play into my pursuits and often helps me decide where to focus my efforts. Nonetheless, it can be a challenge to decide what needs the most attention when a number of projects are looming. When possible, I also try and multi-task. I’ve definitely spent a number of subway rides listening to my iPod and trying to figure out my schedule for the next few weeks. However, the fact that I’m working in a number of diverse, but related arenas is quite energizing.

Are there any skills that have proved especially helpful?

Networking, follow-through, planning, practicing, and establishing a grounded (but flexible) routine have all been paramount. During my time at Eastman I was able to hone many of these skills, often with the help of the IML faculty and staff. I have also come to appreciate the fact that we each have our own unique equation for success. For me, working in complimentary areas has helped open up doors. While not a skill, extra supportive family and friends definitely help.

How important do you think entrepreneurial skills are to your career and the careers of musicians in general?

Extremely important, especially in today’s volatile marketplace. The definition of an entrepreneur – one who manages an enterprise, frequently with significant initiative and a lot at stake – describes many successful arts professionals that I know. They are their enterprise and their careers exist in both the artistic and business realms. Granted, there are a lot of ways to develop the skills needed for a successful music career, including via the school of hard knocks. But, like scales and arpeggios, entrepreneurial skills can be learned and developed as part of a musician’s toolkit.

What advice would you give to current ALP students who are soon to embark on their professional career?

It sounds a bit cliché, but you never know where opportunity will knock or re-knock. I’ve benefited from keeping in touch with colleagues and mentors. I would suggest staying current on the latest developments in the arts world, including advocacy work, and being vigilant and always looking for professional development opportunities.