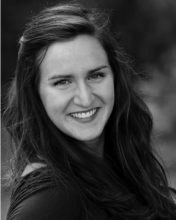 Caitleen Kahn was awarded the Catherine Filene Shouse Fellow Post-Grad Internship for her role as Administrative and Operations Assistant at Musicambia. She is also the Founder and Artistic Director of SoundWave Milwaukee.

You were recently awarded the Catherine Filene Shouse Fellow Post-Grad Internship for your role as Administrative and Operations Assistant at Musicambia. How did you come across this organization?

In short—ALP connections! I knew I would be moving to NYC after graduation, and absolutely wanted to continue my work with El Sistema USA initiatives after working for ROCmusic. As part of my search, I asked Leslie Scatterday if she had any connections to these types of organizations in the city. She got back to me with the contact information for an ALP alum, who put me in touch with Nathan Schram, the founder of Musicambia. (More on Musicambia here.) We set up a meeting to talk over Skype, and from the start it sounded like the perfect opportunity.

What are you most looking forward to about living and working in NYC?

There is so much happening all the time. If you have a particular interest, NYC has something for you. I’m looking forward to taking advantage of as many opportunities as I can, such as getting involved with other El Sistema programs in the city as a volunteer teacher, auditioning for local opera initiatives, and maybe taking some classes at the Irish Arts Center. I’ve already joined a running club (there are about 100 in the city, to give you an idea of the scope), and I can’t wait to be racing again. Of course there are also concerts to attend, museums to visit, restaurants to try, and parks to explore.

One of the most exciting things about NYC is the sheer number of musicians. I’m looking forward to performing with colleagues and friends who have also moved to the city, as well as making connections and creating new collaborations!

This past year, you were an intern at ROCmusic. What are some non-musical skills that you have developed through this internship that you anticipate using as you help Musicambia with social media, advancement initiatives, and collaboration with partner organizations?

One of the most important skills I gained during my time at ROCmusic was the ability to work with many different people in many different positions. For example, I sometimes communicated with administrative professionals, business owners, seven year old students, and concerned parents all in the same afternoon. I anticipate using this set of skills in my upcoming internship as well, because the overall structure of Musicambia has numerous similarities to ROCmusic.

I also learned a lot about how small non-profit organizations run, and what it takes to keep them afloat. There is so much that goes into both day-to-day and long-term planning for groups like ROCmusic and Musicambia that rests largely on the shoulders of one person. It’s fascinating to have the opportunity to assist with this, and to facilitate it in whatever way I can. Which brings me to another key intern lesson—anticipating needs! I’ve learned to think about situations with all sorts of different variables, and plan as best I can for different outcomes. More generally, I’ve also gotten a better sense of which sorts of social media posts perform well, how to run a Mail Chimp account, and how to organize volunteers and delegate tasks.

In addition to your rigorous performance schedule and work with El Sistema initiatives, you are the Founder and Artistic Director of SoundWave Milwaukee. What inspired you to start this multi-disciplinary project?

This project began when I was a freshman in college. I had a number of friends involved in music who were also attending conservatories, and we were still spending part of our summers in Milwaukee. We thought it would be fun to get some extra performance experience during the summer, and it also struck us as a way to give back to the community that had supported our endeavors since we were young. We were off studying and performing in a myriad of different cities, but were no longer performing for the people who had first supported us.

We began putting on one concert a summer for the community. The concerts at the beginning were truly a mishmash of random music that we thought would be fun, but as we went along, we got better at curating more cohesive programs. We didn’t actually decide to name it or formalize it as an initiative until last year (thanks in part to what I learned in ALP courses).

The idea to include more disciplines came from one of our more successful events. In the summer of 2013, our composer-in-residence wrote a song cycle using poems from a local poet. The poet came to our concert and brought his following, highlighting how many more people you can draw when you collaborate! Plus, it really fosters a sense of community pride. Since then, we’ve had other amazing collaborations (i.e. dance, film, photography), and it’s been very rewarding. There’s nothing better than involving your community in your art!

Were there any particular events or courses that you consider to be highlights of your time at Eastman?

Definitely Jim Doser’s ALP course – I would recommend that to everyone. Also, my internship with ROCmusic in general was an amazing experience. A particular highlight from that was when the RPO did an outreach concert at the community center where the kids have their rehearsals. The people who came to see the RPO play that night had largely never been to a classical music event before, and the energy and excitement in the room was palpable. It was one of the most exciting concerts I’ve ever attended. That night just reinforced how alive and full of energy classical music is, and how much bigger our audience could be if everyone had equal access to the arts.

It’s hard to pinpoint exact events— so many performances were incredible and memorable! I think watching my colleagues’ recitals was a particular highlight for me; it’s amazing to watch your friends present music about which they feel passionately.