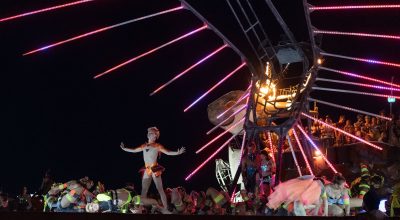 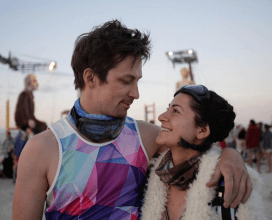 Brad Hogarth is currently the Assistant Professor of Conducting at San Francisco State University and the music director and conductor of Contra Costa Wind Symphony and the Art Haus Collective.

Congratulations to you both on your success with The Art Haus Collective! In August 2017, Brad conducted The Rite of Spring at The Burning Man Festival. How did the concept for that show come about?

Courtney Wise, a friend from the San Francisco Conservatory of Music had been to Burning Man a few times. When the 2017 theme of “Radical Ritual” was announced, she dreamed of putting together a fully staged ballet performance of Rite of Spring. The desert setting is a perfect backdrop for the ballet. She partnered with choreographer Robert Dekkers and costume designer / lead dancer Christian Squires, then approached Jeannie and me to join the orchestra, and together we all helped make the first year a reality. One aspect of burning man that allows for these large productions is the incredible physical art that is created. We were lucky to set the ballet under the Tree of Tenere. It gave the perfect stage for the Rite of Spring.

Jeannie, you are currently the artistic manager for The Art Haus Collective. What initially attracted you to their mission? Has the mission grown or shifted from its original conception?

On a personal level I’ve always been just as attracted to punk rock as classical music, and this felt like an opportunity to bring together an anarchist ethos to a classical ensemble in a really interesting way. Something about setting up instruments in the unforgiving desert, in the middle of a dust storm, trying to play some of the hardest music written for large ensemble really appealed to me. I think when we let go of the idea that perfection is possible we can open ourselves up to real creative experiences – and perfection is definitely impossible in an environment like that! So your nerves go away, to some extent, and that is liberating. Also, this spirit of collaboration at Burning Man is different than anywhere else in the world. There is no advertising, no ticket sales – everyone is just excited to try and do the most badass art they can in real time with as many other like-minded artists as possible. It’s incredible!

In addition to your work with The Art Haus, you are both professors at San Francisco State University. How do you find balance these two facets of your individual careers?

Our work with The Art Haus Collective started as and has continued as our gift to the spectacular artistic atmosphere of Burning Man. Now in our third season, it has blossomed into a concept that we are starting to bring to the rest of the Bay Area community. Being a musician generally means you are balancing many different positions and skill sets, and in this case, we are lucky to have an administration at SFSU that is so supportive of our artistic projects. It is difficult balancing all facets of our careers.

Jeannie, you also work with the American Federation of Musicians (AFM) Local 6 as a union organizer. What skills have you found most helpful in your work with the union, and how did you go about developing those skills?

Unionizing a workplace is all about believing in your own inherent dignity: that you and your fellow musicians deserve a voice in negotiations, that you deserve dignified wages, that you deserve to be safe and healthy on the job. You have to internalize this and you have to internalize also that no one will give it to you, you have to demand it. Just like with music, you can’t be afraid of your own voice. So, belief in yourself, your peers, and your own worthiness is key. I think I developed these skills by watching how poorly musicians are treated in non-union work spaces and getting angry! It’s good to be angered by injustice! Let it move you to action!

Other than meeting each other at Eastman, how did your time studying here influence your career paths after graduation?

For Brad, the combination double degree in Music Performance and Music Ed really opened many doors. It gave me the opportunity to teach at the Gunma Kokusai Academy in Japan with other Eastman Alumni, have a teaching credential that got me a job at the Ruth Asawa School of the Arts, and then sent me on the path to becoming a conductor and conducting professor.

For Jeannie, Eastman was not exactly a comfortable experience. There were many challenges and even times I wanted to quit. Eastman taught me to believe in myself even when the obstacles and challenges felt overwhelming, and to power through. Keep fighting! Coming out the other side and figuring out what your own unique voice is trying to say is so important! It’s not the same as anyone else’s, so don’t get too sidetracked by someone else’s journey or vision for you.