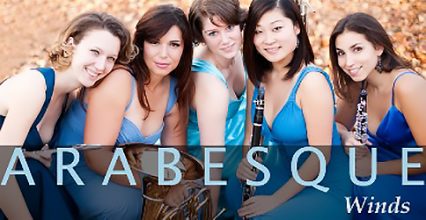 As a young ensemble, the Arabesque Winds have received numerous accolades – including the 2009 Coleman-Saunderson Prize for Woodwinds and Brass, the Harvard Musical Association’s 2009 Arthur W. Foote Prize, and the Grand Prize at the 2008 International Chamber Music Ensemble Competition – and have performed at the Kennedy Center and Carnegie Hall’s Weill Recital Hall. Formed at the Eastman School of Music in 2005, the quintet includes flutist Deidre Huckabay, oboist Liz Spector, clarinetist Isabel Kim, hornist Sophia Goluses, and bassoonist Eryn Bauer. In the interview that follows, Eryn and Sophia, both Arts Leadership Program participants, discuss the process of launching a career, their commitment to community engagement, and the learning they garnered in ALP.

In launching your performance career, what skills or learning have you drawn upon from your experiences in the Arts Leadership Program?

Every class that I took during my time in the ALP program helped in launching a career in chamber music. “Entrepreneurship in Music” with Ray Ricker gave us knowledge about the nuts and bolts of running any type of music business, from writing a business plan, to releasing a CD, to filing taxes. “Leadership Issues in Music” opened my eyes to some problems that I can expect to face as a performer and administrator and gave me ideas about how I could potentially deal with them. The most hands on class was “Arts, Media, and Promotion” with Amy Blum. In this class, I learned how to write a press release, a skill that we will use for upcoming performances and events.

The Arabesque Winds have also been involved in numerous outreach and education programs, including collaborations with the Rochester City Ballet and Young Audiences of Rochester. How do community outreach and music leadership fit into your artistic goals and mission as an ensemble?

Outreach performances always molds and creates artistic goals as an ensemble more than I expect it to. When we are playing for children, we have to over-emphasize any musical idea and artistic expression we wish to convey. I find this helps us when performing for adults because it is easy for them to follow what we are communicating with the music.

Raising awareness of classical music and enforcing how important it is to a community is very important to us. We try to never lose sight that we are speaking to a group of potential classical music concert-goers every time we step in front of children.

How has the Arts Leadership Program influenced your desire to engage in community programs?

The ALP Program made me realize how many organizations there are just in Rochester to help the community grow. This inspired me to do my part in helping, by showing as many people in the area as possible that classical music is still very much alive.

What do you believe to be the importance of actively seeking and creating opportunities for yourselves as young professional musicians? Do you have any advice for other young musicians trying to launch their careers?

Actively seeking and creating opportunities for yourself as a musician is the most essential device to building a career. Students who have gigs handed to them are very lucky and very few. It is vital to get your name out there as a talented and reliable musician and to create your own career.

Where do you hope the ensemble will venture in the future?

We hope that the ensemble will continue to play in the most prestigious halls in the world (our next goal is Lincoln Center)! We are aiming to receive management through a very reliable firm, and in the meantime managing ourselves as we have for the past 3 years.

Eryn Bauer is a senior at the Eastman School of Music and studies with John Hunt. She plays in a wide variety of groups including chamber music, outreach performance, orchestras, and new music ensembles. She has played with the Rochester Philharmonic Orchestra, and soloed with the Tampa Bay Symphony at age 17 when she was the winner of the Tampa Bay Symphony Young Artist Competition. She traveled to Chihuahua, Mexico with the Eastman Broad Band to perform newly commissioned pieces. She will be traveling to Chicago as principal bassoonist with the Eastman Wind Ensemble for the Midwest Conference. Eryn recorded Michael Tenzer’s Resolution, which is to be released in summer 2009, and Ricardo Zohn‐Muldoon’s Nino Polilla under Bridge Records. She has participated in summer music festivals such as Sarasota Music Festival, Kinhaven Music School, and Atlantic Music Festival.

As a horn soloist, Sophia has appeared with the Eastman Composer’s Sinfonietta, giving the world premiere of Jennifer Bellor’s “Bell Song,” for solo horn and orchestra, with the Eastman Community Music School’s Children’s Chorus, as well as with the Lyons High School Band, premiering Baljinder Sekhon’s “Synergy” for wind quintet and concert band. Sophia has attended music festivals such as Aspen Music festival and School, Music Academy of the West, Pierre Monteux School for conductors and musicians, Brevard Music Festival and the Atlantic Music Festival. Sophia Goluses has recorded with the Eastman Opera Theater for Troy Records, the Eastman Wind Ensemble and the Canadian Brass with Archivmusik, the Ohio Light Opera with Albany Records, and the Eastman Broadband for Bridge Records.

Sophia completed her B.M. from the Eastman School of Music in horn performance in the spring of 2008 where she studied with the RPO’s principal horn, W. Peter Kurau and the RPO’s second horn, Jennifer Burch. Sophia loves to teach horn players of all ages and skill levels and believes in tailoring her skills to each student, rather than expecting each student to fit an assumed mold. She also teaches beginning piano, voice, trumpet, trombone, euphonium, and tuba.

The Arabesque Winds “played with skill and depth beyond their years,” at a recent performance according to the Washington Post, “but it was the unanimity of their ensemble phrasing that took the breath away.” The ensemble represented the Eastman School of Music at the Kennedy Center’s Conservatory Project, and performed a full recital at the Terrace Theater in May 2009. Recognized for their fresh, energetic, and interactive performances, the Arabesque Winds were recently awarded the 2009 Coleman-Saunderson Prize for Woodwinds and Brass at the Coleman Chamber Ensemble Competition. The group has also won the Harvard Musical Association’s 2009 Arthur W. Foote Prize, awarded to young musicians on the verge of professional careers, in addition to the Grand Prize at the 2008 International Chamber Music Ensemble Competition. In what the judges described as “an astounding performance” at Carnegie Hall’s Weill Recital Hall, the group garnered first prize over 70 international ensembles. In February 2009, the ensemble won Second Prize at the Henri Tomasi International Woodwind Quintet Competition in Marseilles, France, where they also won the Lucien Guerinel Prize for best interpretation of the composer’s commissioned work for the competition.

Dedicated to the performance of contemporary wind music, the Arabesque Winds acted as an ensemble-in-residence at the 2008 Festival Internacional Chihuahua in Chihuahua, Mexico. There, they performed the world premiere of Rodrigo Valdez Hermoso’s “beyond the darkness, there’s still the light.” They have also performed the world premieres of works by Moiya Callahan, Jairo Duarte-Lopez, Michaela Eremiasova, and Scott Worthington, in addition to the American premieres of Carlos Sanchez-Gutierrez’s “Twittering Variations” and Juan Trigos’s “Ricercare V.” In April of 2009, the Arabesque Winds acted as a featured ensemble at Eastman’s Warren and Pat Benson Forum on Creativity. Ensemble members also frequently perform with Ossia, NEO Orchestra, and the Eastman BroadBand.

As active supporters of music outreach, the Arabesque Winds have presented interactive and educational programs in schools and community venues all over the country. In January 2009, they collaborated with the Rochester City Ballet to present a children’s program featuring Prokofiev’s “Peter and the Wolf.” They have also served as ensemble-in-residence in the public schools of Lake Placid and Tupper Lake, NY, and in school districts in Washington, DC, Texas, Florida, and New Jersey. In May 2009, the group premiered a woodwind quintet concerto by Baljinder Sekhon II alongside young Rochester area music students. They also acted fellows at the Atlantic Music Festival in summer 2009 as resident performers and teachers. The group joined the Young Audiences of Rochester roster in fall 2009.

The Arabesque Winds formed at the Eastman School of Music in 2005. While at Eastman, the quintet was advised by coaches Robert DiLutis, Anne Harrow, and Kenneth Grant. They have also received coaching from members of the Imani Winds, Zephyros Winds, and Windscape.