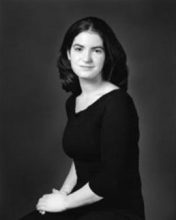 Anna Reguero is the music and dance reporter for the Rochester Democrat and Chronicle. She plays the clarinet and completed her undergraduate degrees at the Eastman School of Music and University of Rochester, and her graduate degree in Arts Journalism at the S.I. Newhouse School of Public Communications at Syracuse University.

Anna Reguero is the music and dance reporter for the Rochester Democrat and Chronicle. She plays the clarinet and completed her undergraduate degrees at the Eastman School of Music and University of Rochester, and her graduate degree in Arts Journalism at the S.I. Newhouse School of Public Communications at Syracuse University. She is also a graduate of the Pre-College Division of the Juilliard School. She is the editor for the Journal of the Conductors Guild and has written for Strings Magazine, NewMusicBox.org (American Music Center’s web magazine), the Queens Chronicle, the Syracuse Post-Standard and Syracuse New Times, and publications of the American Symphony Orchestra League.

While at Eastman, she served as editor of the Eastman section of the University of Rochester’s Campus Times, hosted a classical music radio show on WRUR and graduated with an Arts Leadership Certificate from the Institute of Music Leadership.

Why did the Arts Leadership program interest you?

It always concerned me how wrapped up musicians were in their technical abilities and how they locked themselves in practice rooms. Musicians often alienate themselves from the rest of the world, thinking that practicing more would bring them flourishing careers. Disconnecting from the world seemed opposite of what I was trying to express with my own musicianship, especially as someone interested in performing contemporary music.
While it’s important for every musician to play music as best as they can, there’s more to having a career. Musicians have to learn to reach out to the outside world and learn how to inform and excite others about their art and creativity.
After writing for the campus newspaper and starting to read the big news sources and music publications during my first couple of years at Eastman, I realized that the message the ALP program was trying to espouse was exactly what I was reading about in these publications. I knew that having real-life skills in music business, public relations and even just learning how to follow and discuss trends in music would be paramount in the field I was trying to survive in.

How did your ALP experience influence/affect your life as a musician?

It changed the way I thought about having a career in music. Going into music seemed like a dead-end road. How does one make a career in this? Just audition for orchestras and hope to win one someday? And, considering I had no real talent for teaching on a day-to-day basis, I was honestly scared about what I was going to do once I graduated. My classes through the ALP program opened my eyes to the possibilities for musicians. My classes asked me to be innovative in the field of music – find something missing in music and capitalize on it. We built up business plans and wrote grant applications. And then I learned the fine art of promotion, reaching the media and creating a recognizable product – for example, a chamber group with pictures, logos, demo recordings and a target audience, all packed up in a nice press kit and website. It made me think very differently about a career in music, and I felt that I left Eastman with the tools it would take to make a career for myself rather than wait for one to find me.

Did the ALP change and/or enhance your outlook on your potential career? How did the ALP help your career options?

It changed my outlook more than I ever expected it to. I was so excited about each new thing I was learning about that I wanted to give everything a try, from music therapy to classical music radio. But I came to realize that there was a thread that ran through everything – I wanted to change people’s lives by sharing my ideas about music. As a young person, classical music connected to me; I thought it was important to figure out why and share that with a larger population. It brought me back where I started, even before the ALP program, to writing about music, but now I had a much larger knowledge of the state of classical music and the direction it was going. So, it really did broaden my career options because I never before would have gone into music criticism if I hadn’t been given the opportunity to explore all that’s out there. It also gave me the confirmation that being involved with the wheels that make the music world turn didn’t make me less of a musician – quite the opposite, it gave a lot more meaning to every performance. I knew why I was out there, what I stood for as a musician and what it meant in a larger context. And continuing to be a musician would prove later on to be the most important source of knowledge for my career – something that would set me apart from a lot of other music critics out there.

What are some key elements that an ALP certificate brings to an artist?

The key element that the ALP certificate brings is the ability to inform the world that you exist as a musician and, also, how to navigate your career.

What challenges face young musicians today, and what are some vital skills that could help overcome those challenges?

The biggest challenge that I see facing young musicians is the over-saturation of the field. There are so many talented musicians doing much of the same thing. As part of the media, it’s difficult to sift through it all and find the real gems. Learn to be a face and a voice for music, not only an extension of your instrument. Learn to be about something as a musician because it’s that message that will catch people’s attention. Listen to lots of live music, read the news, be an active person in society. Be original, inspiring and don’t be afraid to be personable or to educate. The more you create an intellectual gap between classical music and the modern, popular world, the less chance you have of gaining an audience. Take advantage of new technologies. Be involved in the discussion about music (which has become increasingly easier thanks to the internet and the popularity of music blogs).

Where did you serve as an intern during your ALP study?

I interned at WXXI 91.5, the classical music radio station in Rochester for one summer. I also did a year-long internship in music therapy at Strong Hospital.

What does arts leadership mean to you?

Just that: be a leader. Be creative and make waves in something totally unheard of before. No one says you have to follow a traditional route. Make your own path. You will be surprised by how much effect you have in the small world of music by being open-minded.

What is your favorite ice cream flavor?