The University of Michigan EXCEL Lab, in collaboration with the Eastman School of Music’s Institute for Music Leadership and a cohort of seven co-sponsors recently completed week six of the Virtual Visionaries series. 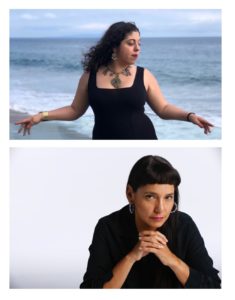 Our guests for this week were Dr. Donia Jarrar and Rosy Simas. Dr Jarrar (she/her) is an Arab and Muslim-American composer, pianist, and interdisciplinary artist. She was raised in Kuwait City, Alexandria, Ramallah, and New York, and her work explores themes of intergenerational memory, trauma/healing, identity, exile, displacement, and cultural narrative. She was the recipient of a 2019 Discovery Grant for Female Composers by the National Opera Center of America and has been commissioned by the Doris Duke Foundation for Islamic Art. Rosy Simas (Seneca, Heron Clan) is a transdisciplinary artist whose work merges movement with media, sound, and objects for stage and installation work that is literal, abstract, and metaphoric. Simas’ work weaves themes of personal and collective identity with family, sovereignty, equality, and healing. She is the recipient of Dance/USA, McKnight, Guggenheim, First People Fund, and Native Arts and Cultures Foundation Fellowships. A Joyce Award recipient, Simas has received additional support from the NEFA National Dance Project, MAP fund, and National Performance Network.

The topic for week five was Art Inspired by Identity. The topic was both timely and relevant as academic institutions across the globe grapple with the systematic racism and lack of equity that pervade the system. In her blog post, Dr. Jarrar highlighted how her work is informed by her identity as a Brown, Queer, Muslim, Egyptian, Palestinian, Arab, America, Third Culture, Immigrant, Composer. In both the blog and Zoom session, she reflected on some of the problematic experiences people of color experience in the field:

Students of color need to see themselves and their identities represented in as many ways as possible, and that means allowing those students and giving them the resources to express themselves fully beyond the boundaries of what is deemed their role as cultural bearers and representatives of their race. Their identity is not to be appropriated, misused, or tokenized, especially when they are facing a war of identities within themselves and their own communities.

In her blog post, Rosy Simas offered similar perspective on how culture is often appropriated in our profession:

One misconception about Native artists, is the assumption that an artist who is Native is not a Native artist unless they are dealing with subject matter that is recognizably Native to others. And by others, I mean non-Native folks and even other Native people who have been influenced by pervasive stereotypes of Native people (the Nobel savage, the Indian maiden, the drunk Indian, and the Big Bad Indian).

The topic of identity and how it relates to artists was really captured by a quote that Dr. Jarrar shared in both her blog post and the Zoom session from Gloria Anzaldua’s Light in the Dark/Luz en lo Oscuro: Rewriting Identity, Spirituality, Reality:

It’s not race, gender, class, sexuality, or any single aspect of the self that determines identity but the interaction of all these aspects plus as yet unnamed features. We discover, uncover, create our identities as we interrelate with others and our alrededores/surroundings. Identity grows out of our interactions, and we strategically reinvent ourselves to accommodate our exchanges. Identity is an ongoing story, one that changes with each telling, one we revise at each way station, each stop, in our viaje de la vida (life’s journey).

When pressed on how artists who want to fight against racism and systematic oppression should approach this important work, the message was simple: DO THE WORK! No one else is responsible for one’s education—it is our own responsibility to first educate ourselves and then to educate others. Both guests reflected that in academia, there is often an expectation or belief that BIPOC have a responsibility to be the cultural ambassadors at their institutions. Simas highlighted that oftentimes white scholars—and white people for that matter—possess an entitlement that they should have access to the time, space, and presence of BIPOC. The responsibility lies with those seeking to learn and understand to read, research, and understand. Dr. Jarrar shared poignant perspective acknowledging that anti-racism work often includes us regularly looking inward and constantly growing ourselves. She shared a powerful quote by Ijeoma Oluo:

The beauty of anti-racism is that you don’t have to pretend to be free of racism to be an anti-racist. Anti-racism is the commitment to fight racism wherever you find it, including in yourself. And it’s the only way forward.

The importance and relevance of this week’s topic was apparent before the initial blog post was release on Monday afternoon. The primary takeaways from the honest and sober lessons that Dr. Jarrar and Ms. Simas shared are that there is much work to be done in our field, there is an incredible urgency to this work, and we all must take a proactive and informed role in educating ourselves, listening to others, and enacting change.

UP NEXT: Virtual Visionaries: Leading Beyond Crisis 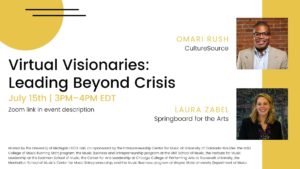 These two leading arts executives will share their perspective on what the future may hold for the artists and local non-profits, and how leading service organizations are imagining what new resources and/or programming might need to come into focus in order to sustain the arts in our communities. Omari Rush serves as Executive Director of CultureSource in Detroit and as the governor-appointed chairman of the Michigan Council for Arts and Cultural Affairs. Laura Zabel is Executive DIrector of Springboard for the Arts in Minneapolis, and as a 2014 Bush Foundation Fellow, was named one of the 50 most influential people in the U.S. Nonprofit Arts.

Virtual Visionaries is a 10-week series in partnership between UM’s EXCEL program, Eastman’s Institute for Music Leadership, and seven other national partners. Starting the week of May 25 through early August, this series brings together professionals across the performing arts for weekly virtual discussions on Zoom. We’ve selected a diverse group of leaders at various stages of their careers to engage in open conversations about topics ranging from personal finance issues, to developing identity-driven work, along with a variety of entrepreneurial approaches relevant to young arts professionals. Each week our guest speakers will also author a blog post, providing a sneak peek of the virtual sessions and providing a basis for our virtual discussion.