This article was written by Mehmet Ali Sanlıkol, president and Robert Labaree, vice president of DÜNYA, a Boston-based musician’s collective.  DÜNYA was a Paul R. Judy Center grant recipient in 2015 – they were awarded funding to support performances of their production “Othello in the Seraglio.”  In the article below, Mehmet and Robert reflect on over a dozen performances of this work, what makes it unique and innovative, and what they have learned from the process and their audiences. 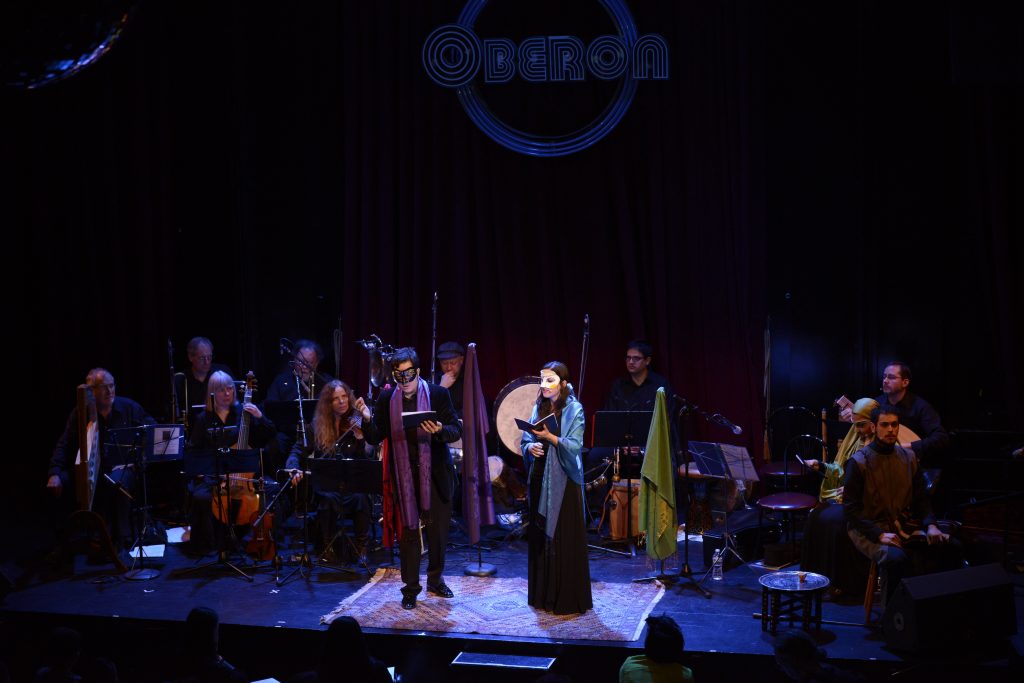 Imagine a full evening music drama featuring a multilingual storyteller and four masked vocalists singing in either Turkish or Italian, supported by a small ensemble of Turkish and early European instruments, with minimal props, costumes and staging—this sounds like a no-fail recipe for how to alienate a 21st century American audience. Remarkably, as challenging as it has been to create, rehearse, finance and publicize Othello in the Seraglio: The Tragedy of Sümbül the Black Eunuch, audiences have shown few signs of alienation. These audiences have been diverse, including people born in the U.S., the Middle East and the Balkans, as well as many raised on grand opera, Broadway and elaborate special effects. Beginning with the very first performances in the spring of 2015, in spaces ranging in size from libraries to full sized concert halls, audiences have not only shown up in rewarding numbers but their response has been immediate, enthusiastic and emotional. We have been gratified to find people returning for a second and third time, and word of mouth continues to bring people to a performance because a friend told them things like “you just have to see this” or “it’s like nothing I’ve ever heard.”

We feared for the worst, but it seems we were wrong. Looking back over more than a dozen performances in the past 18 months, and looking forward to three more in the fall and to filming the production, we now believe that there are two main reasons for the surprising response to this complex intercultural experiment. Both reasons are rooted in current American experience, but they also have deep historical roots extending well beyond the 120 minutes of our modest production.

First of all, in post-concert talks with audiences following a number of performances we have learned that many welcomed the kind of up-close, minimalist, chamber-style performance suggested by our purposely ambiguous caption “coffeehouse opera”. Second, and just as important, the production also seems to speak directly to political and cultural issues discussed hotly in the U.S. right now—the polemic of Islam vs. the west inherited from the middle ages, and the polemic of black vs. white inherited from three hundred years of African slavery in North America. Slavery as a global phenomenon—both the trans-Atlantic (European) trade and the less familiar trans-Saharan (Middle Eastern) trade—is a thread woven into both of these polemics. But how do the coffeehouse opera experience and these cultural conversations find their way into this 17th century story about a former slave—a boy captured by slave traders in the Sudan and driven in chains across the Sahara to Egypt where he is castrated, then sold to the Ottomans? (Note: the value of an African male quadrupled if castrated.) Through decades of service this slave rises to a position of fame and power in the palace of the sultan, and then comes to a tragic end. How does the interplay of the more familiar and the less familiar instruments in the production contribute to a convincingly emotional telling of this story for American audiences? What does this love story, inseparable from its grisly history, gain by switching between multiple languages—Turkish, Italian and English—and multiple musical idioms—the melodic practice of Turkish makam (mode) and the harmonic practice of 16th and 17th century Europe? 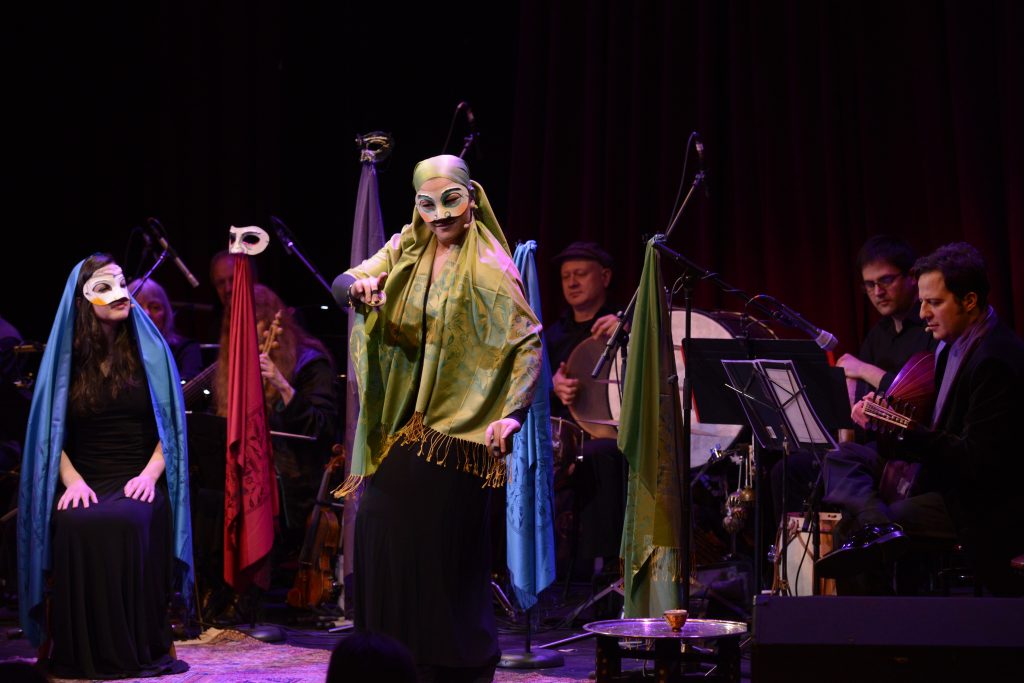 In attempting to answer these questions we have continually returned to the ensemble nature of this production. Our Othello, in part, grew naturally from more than a dozen years of multi-lingual performances by DÜNYA (“world” in Arabic, Turkish and Greek), a collective of Boston-area specialists in a wide range of musical vernaculars including the Turkish, Arabic, Greek, Armenian and Jewish idioms of the former Ottoman Turkish domains for six centuries in the Balkans, Middle East, and North Africa. Over the years we have learned how to add to this Ottoman mix an array of repertoires from Europe, as well as jazz and popular music. We have learned through experimentation that the cultural complexity of the eastern Mediterranean is best represented by carefully orchestrating conversations among the various local idioms, allowing the distinctive melodies, rhythms and poetries to speak for themselves. Close collaboration among vocalists and instrumentalists steeped in each of these vernaculars has been crucial to telling stories with both complexity and audience appeal. We have found that, at times, musicians themselves can be depended on to instinctively solve problems that arise in the act of combining these different styles.

Three years ago, in the early planning stages of the production, this ensemble experience reassured us that a way could be found to recast Shakespeare’s Moor of Venice as Sümbül the Chief Black Eunuch, an historical figure who ruled the harem of the Ottoman sultan in the 17th century. In our version, Othello’s wife Desdemona is Suzan, an Italian slave destined for the sultan’s harem. Iago, the mastermind of Othello’s downfall, is Mustafa, another Italian slave-soldier, enflamed with jealousy over the Black Eunuch’s status and the impossible love which the eunuch and Suzan have for each other. Each of these characters speaks a language and musical idiom reflecting his or her own origins, accompanied by appropriate instruments. When the Italian Suzan (played by Camila Parias) speaks, she does so in the musical idioms of Claudio Monteverdi and Emilio de’Cavallieri, even though her words are rudimentary Turkish, the language of her station as a slave. Sümbül on the other hand, whose boyhood language has been obliterated along with his manhood, sings in high Ottoman vocal style in keeping with his station as a palace official. His language is Persianate and his vocal style is complex and improvisational, in the manner of classical Ottoman gazel. Suzan and Sümbül are converts to Islam, as was customary in the Ottoman slave system, but they are also multi-layered human beings, and their origins across the Danube or across the Sahara are reflected in their speech and in their music. 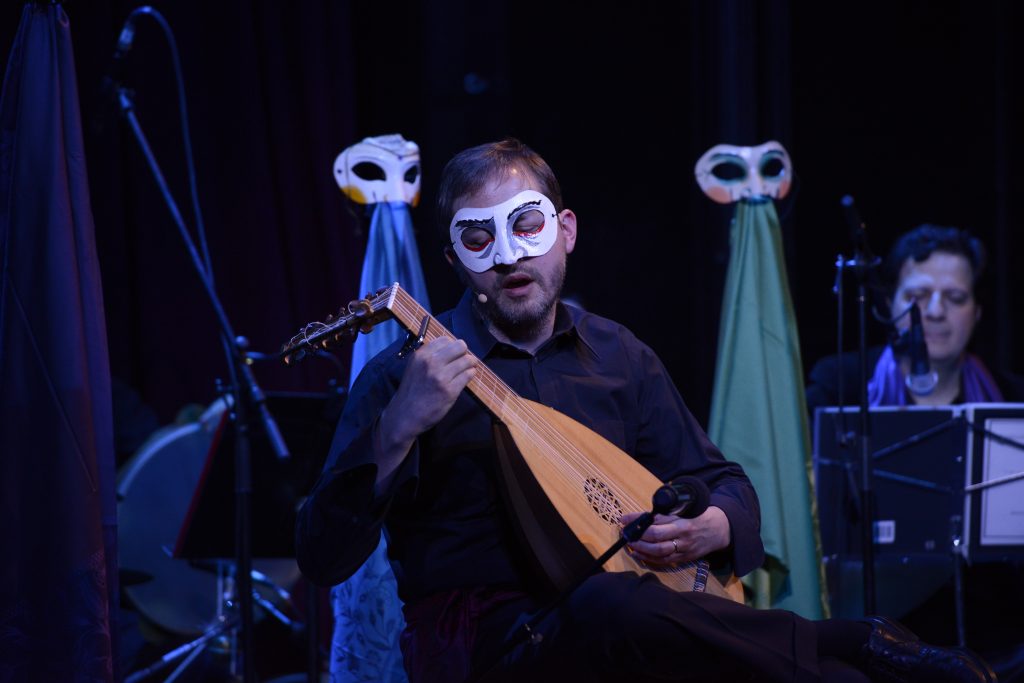 It is also worth mentioning some additional reasons which might help explain the production’s surprising audience appeal. There is the fact that the Othello legend itself has made our intercultural story-telling easier: most Americans are familiar with the general outline of Shakespeare’s version of the story. They have at least heard that it will not end happily, and that the tragedy of Othello has something to do with his blackness. This might just be enough to keep them in the story long enough for the music to pull them in. The storyteller, the creation of Robert Labaree and played by Max Sklar, also makes our job easier, acting as translator and interlocutor for the audience, allowing them to stay with the plot without having to keep their eyes glued to the program notes and texts in the program booklet. In Ottoman coffeehouses in the 17th and 18th centuries, men would gather to smoke and drink coffee while listening to a meddah, a respected figure who could entertain his audience for hours, weaving well-known tales with current events and gossip, jokes and proverbs, satire of public figures and Sufi teaching stories. If the meddah seems exotic, his role as spellbinder is certainly not. He speaks directly to the audience, walks in among them, and guides the action on the stage. It is his story, his opera, and his troupe of musicians. Four of the musicians play instruments in the orchestra until the moment when, at the meddah’s cue, they enter the story by donning a mask and stepping onto the Turkish carpet at stage center. His constant presence is the anchor for the audience, no matter how provincial their tastes or how many details they may miss.

And then there is the music itself, the all-important emotional spine of the drama. It was composed and arranged by Mehmet Ali Sanlıkol creating a composition in three stylistic layers: borrowed period music (from 17th century Turkish and Italian sources), new music incorporating melodic and harmonic features of the borrowed material, and musical instruments and timbres (not period specific) that highlight dramatic moments. The resulting mix of the old, the traditional and the newly-composed repurposes each musical language for a context more cosmopolitan than the musicians and audiences of the 16th and 17th centuries could have imagined. 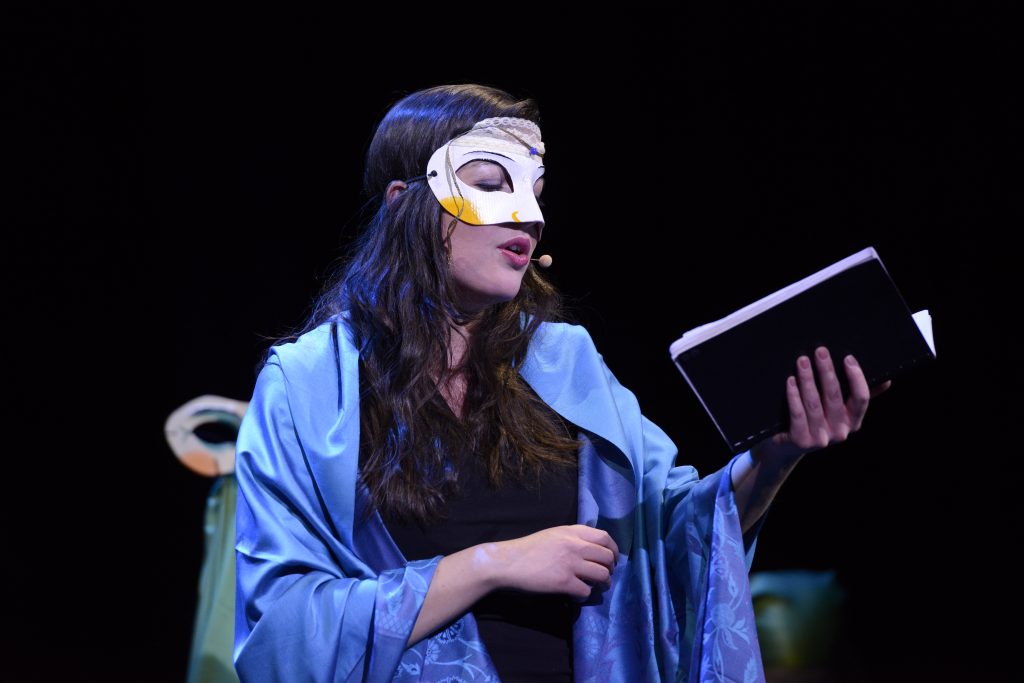 Here again, the material has made our task of reaching an audience easier. We have learned that many people who would never think to go to a concert featuring sackbut, dulcian and viola da gamba or ney, zurna and çeng seem to find the juxtaposition of the early Italian and Turkish sound worlds attractive and even communicative, especially in the context of a story set in in the eastern Mediterranean. The harmonic and vocal style of the early European Baroque, while a bit antique sounding, is nevertheless hospitable to even unsophisticated listeners. The historic emotional cues of minor and major intervals, for example, are recognizable in the closing quartet of Othello in the Seraglio which Sanlıkol composed a cappella in 17th century Italian style. Listen closely and you will hear that within the familiar triadic polyphony of the quartet, the two Turkish singers are audibly distinctive in their intonation, articulation and ornamentation, carrying suggestions of the world of Turkish makam performance. The quartet is followed by a mourning ritual accompanied by the multiple melodic and rhythmic layers of a Sufi zikir ceremony with improvised ney solo. All these differences seem to carry significance for the audience even though they may not be able to put a name to them.

Frenk Mustafa (our Iago and Shakespeare’s villain), played by Michael Barrett, is an Ottoman slave soldier born in Italy. He sings a love song in Turkish for the Black Eunuch’s wife Suzan, accompanying himself on a lute. The song is lifted from the pages of a 17th century Ottoman manuscript and arranged by Sanlıkol for the full ensemble harmonized like a solo madrigal à la Monteverdi. In the role of Sümbül, Sanlıkol at times improvises in a virtuosic style which Americans might associate (correctly) with the Islamic world, with the world of Middle Eastern maqam, even with koranic chant. Their emotional reaction to these vocalisms might be complex and even negative, but the reaction will certainly not be neutral. And isn’t that what we want? No composer or director of music drama seeks to create emotional neutrality. Bel canto style and high Ottoman style can speak directly to Americans, even to those who hear only that the two styles are different. The potential tension between the styles becomes part of the musical and dramatic experience.

Perhaps this is another take-away from the past 18 months of performances. The unexpected appeal of our multicultural Othello might also be the result of the general public’s increased comfort with differences of all sorts. Difference itself—the juxtaposition of the potentially alienating with the more familiar—can be expressive and affecting. We have already found this in DÜNYA’s work over the past decade. But in a world where there is almost no hiding from difference, we were wrong to assume that distinct, stand-alone, pristine cultural languages were the only aesthetic standard. We should not have been surprised that musical and cultural invasion, interaction, juxtaposition, mingling, and borrowing are already at work in the lives of our audiences.

We are grateful to the Paul R. Judy Fund for the support it has given to this project.

Othello in the Seraglio: The Tragedy of Sümbül the Black Eunuch

A coffeehouse opera for 11 musicians and a storyteller
Produced by DÜNYA, a Boston-based musicians’ collective