The article below was written by Margaret Hinchliffe, a 2020 Paul R. Judy Center for Innovation and Research Grant Recipient. A pianist, collaborator, and educator, Hinchliffe is passionate about storytelling through music. She has performed at Festivals including the Aspen Music Music Festival, the American Institute of Musical Studies (AIMS), Songfest, and Source Song Festival. Hinchliffe’s project, “How It’s Musically Made” featured poets, composers, and performers in all stages of the creative process and resulted in new poetry, new music, a podcast premiere, and a virtual concert that features diverse creators and performers.

Project: How It’s Musically Made

During my time as a graduate student in collaborative piano at Eastman, my interest in art song led me to pursue a course in poetry writing on the River Campus. Although I had studied Lieder, mélodie, Italian, British, Spanish, and American song repertoire, I had never before studied the art of writing poetry. As a performer, I wanted to engage more deeply with the songs I played. I thought if poets, composers, and performers could work together more closely, it could create deeper connections between poetry and music and allow room for more diverse voices. With support from a grant from the Paul R. Judy Center for Innovation & Research, I decided to create the podcast project, How It’s Musically Made, which brought together musicians and poets to write original art songs.

How It’s Musically Made involved three interdisciplinary ensembles (each with a poet, composer, vocalist, and 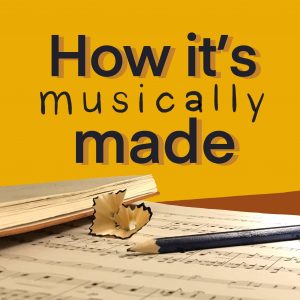 pianist) that created new poetry and new music. We interviewed each ensemble as they worked together to create an original art song and hosted a virtual premiere of the completed art songs. I, along with my co-host, composer Ben Morris, met virtually with each group once a week for two months to discuss their progress. We recorded these conversations and released them as podcast episodes every Sunday.

The first group consisted of poet Brianne Griffith, composer Nicky Sohn, pianist Nathan Cheung, and mezzo-soprano Veena Akama-Makia. At the beginning of their process as heard in Episode 4, they discussed the concept of “home,” leading Brianne to write the lines, “Home is a voice –– you belong here/Home is a whisper –– you’re allowed to cry here.” Nicky wrote a piano accompaniment where the note G was representative of “home” and often returned there. As discussions continued, however, the group came to the conclusion that “home” is not always a safe place. Recently, Breonna Taylor was shot and killed in her own home in March 2020. In Episode 7, they decided to expand into a song cycle dedicated to Breonna, using some of her tweets as texts. This cycle is called Home with three movements: “Home is a Voice,” “Home is Safety,” and “Home is my Body.”

The second group was poet Marissa Davis, composer Nevada Lozano, pianist Rebecca Luppe, and baritone Nnamdi Nwankwo. Their theme was centered around how it feels to be a young artist leaving academia or just beginning a career. Marissa wrote the line “I hear the river shudder miles from my feet” and in Episode 5, Nevada demonstrated different ways it could be interpreted musically using modes and eighth-note river-like textures at the piano. After Marissa read the final poem in Episode 8, both Marissa and Nevada discussed their contrasting interpretations of its form. As the group worked to complete the song and record it, Nnamdi and Rebecca shared their ideas about vocal range, timbre, and practice techniques specific to new music.

The third group consisted of poet Smith Yarberry, composer Baldwin Giang, pianist Georgia Mills, and soprano Vidita Kanniks. They bonded through a shared interest in non-classical genres such as indie, pop and folk music. Since Smith’s writing often addresses love and relationships, they decided to lean into that theme and write an art song in the style of an indie-pop love song, as explained in Episode 6. It involves prepared piano, an electronic keyboard, and a new style of singing for Vidita, whose background is in early European and Indian classical music. The group is producing an accompanying music video, to be released soon.

We premiered everyone’s work on our last podcast episode (Episode 10) and hosted a listening session via Zoom. We also received feedback from the artists and learned that everyone had taken a different approach to interdisciplinary collaboration. One challenge of this project was to ensure that each poet, composer, pianist and vocalist felt connected to the creative process and had their voice heard from the very beginning. We also wanted to bring poets into musical conversations and break down the idea that the composer is the lead creative voice in making new art songs. While some of the artists felt comfortable in this setting, others found it more challenging.

In the end, though, I was glad to hear that every participant thought How It’s Musically Made was a unique experience. Most of the musicians had not worked with poets before and the poets had never written for musicians. Our hope is to continue this podcast and eventually expand it to an in-person setting such as a week-long summer festival.