The article below was written by Ben Melsky, Executive Director and Harpist of Ensemble Dal Niente, a 2015 Paul R. Judy Center for Applied Research grant recipient. Ensemble Dal Niente is a Chicago-based contemporary music collective that presents and performs new music in ways that redefine the listening experience and advance the art form. The programming, brought to life by a flexible repertoire-based instrumentation, seeks to challenge convention and create engaging, inspiring, and immersive experiences which connect audiences with the music of today.

As Executive Director and harpist for Ensemble Dal Niente, perhaps my favorite characteristic of this ensemble is the broad diversity of programming that our artistic team (Michael Lewanski and Chris Wild) actively pursues and our twenty-two members are able to interpret and perform. Our season is a mixture of aesthetic challenges as well as administrative ones. We’ll be presented by local and national presenters, travel to universities for residencies, and self-produce ambitious concerts right here in Chicago. Last year, our 2015-16 tenth anniversary season featured our annual Hard Music, Hard Liquor concert in which performers and audiences embrace music that is technically and sonically extremely challenging; our Dal Niente Presents series in which individual members are presented in concerts of their own curation; and our ambitious, concert marathon, all-bets-are-off, CD release, over-the-top musical experience, PARTY 2016. 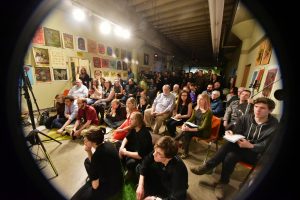 On April 30th, 2016, we presented our third iteration of PARTY, an unconventional concert experience in which sets of music are interspersed between food, drink, and conversation in an electric, informal atmosphere. Audience members are encouraged to experience the music any way they wish, whether it be lying on one of the mattresses provided throughout the space, standing up close to the performers or relaxing at the bar. Produced in conjunction with Chicago’s independent contemporary cassette label, Parlour Tapes+, the concert extravaganza was held in the third floor commons of our industrial rehearsal building in Chicago’s Irving Park neighborhood. The artist loft space is decorated floor to ceiling with work from local printmakers and artists and is home to a dozen local organizations. Local business Apart Pizza Co., Great Lakes Brewery, Windy City Winery, Chirp Radio, and Seasons Soda all contributed to the success of the event.

Tremendously ambitious in scope to celebrate our tenth anniversary, PARTY 2016 included performances of sixteen works by a large and diverse group of local and international composers. A wide array of musical aesthetics ranging from traditional tonality to noise to performance art to anything that defies genre classification ensured that there was both something for everyone and something completely new for everyone. PARTY is about engaging with music in a new way and experiencing it from a new perspective; four separate stage areas were set up within the space with performances of several works entirely surrounding the audience.

On the program were world premieres by San Diego based composer Natacha Diels, Dal Niente founder Kirsten Broberg, and Parlour Tapes’s Andrew Tham. Natacha Diels’s Elpis, for instrumental ensemble and assistants, twists culturally established conceptions of image in mind-bending ways through the inventive application of objects, bodies, and instruments. Broberg’s modal Take Me In is a peaceful reflection on a poem by Jalal ad-Din Muhammad Rumi while Andrew Tham’s Rave Pyramid uses four performers whose body language, pantomime, and contrived conversation create a kind of awkward dinner party atmosphere in front of the audience. The piece ends when the four performers walk into the audience and, one by one, gently coax the audience into slow dancing under a spinning disco ball. Rave Pyramid is at once complex, ridiculous, vulnerable, and thoroughly entertaining. 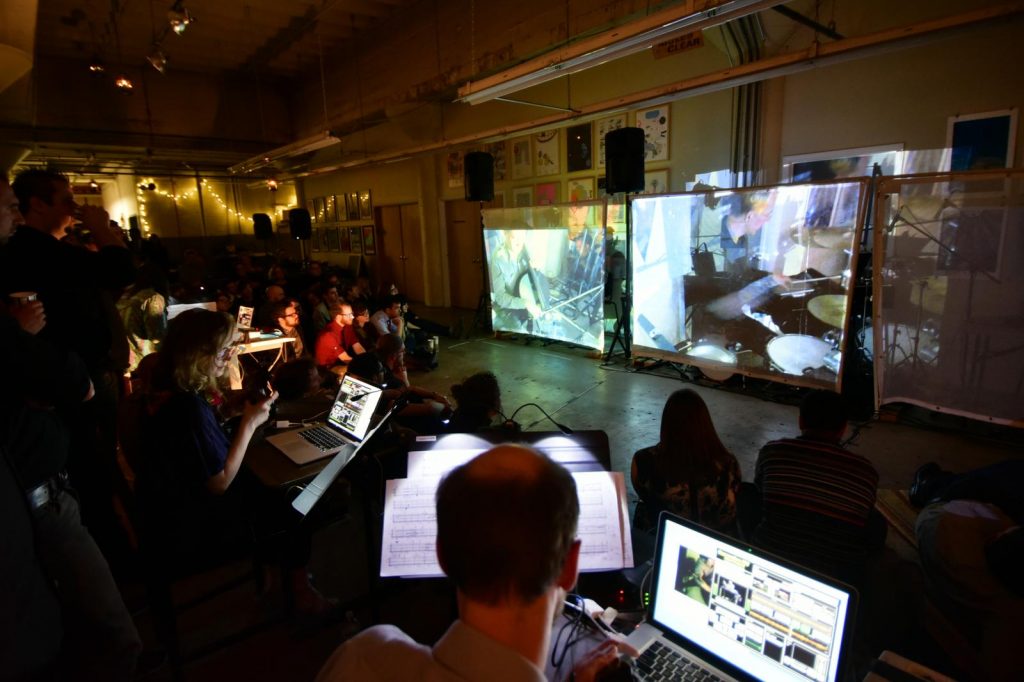 med only in Europe until now, Stefan Prins’s Generation Kill for four instrumentalists and four assistants made it’s North American premiere on PARTY 2016. A work of intense sensory stimulation and disorientation, the four instrumentalists’ (violin, cello, guitar, and percussion) are stationed behind semi-transparent screens upon which are projected videos of those performers intermixed with imagery from military drones, satellite images, and news media. Individually placed in front of the screens, the four assistants manipulate the video and audio via playstation controllers, thus creating an intensely powerful experience that pointedly questions personal agency, reality, and responsibility.

The concert concluded with a performance of Greg Saunier’s Deerhoof Chamber Variations, written for Dal Niente and recently released on the ensemble’s critically-acclaimed Balter / Saunier (New Amsterdam Records). Saunier’s work is a quirky, fragmentary medley of excerpts from the band’s catalog arranged for chamber ensemble and voices, recasting Deerhoof songs in half-familiar classical styles with a disarming charm. Saunier’s piece is part of a three year genre-bending collaborative project between Dal Niente and Deerhoof and will be performed several times in our upcoming 2016 / 17 season. 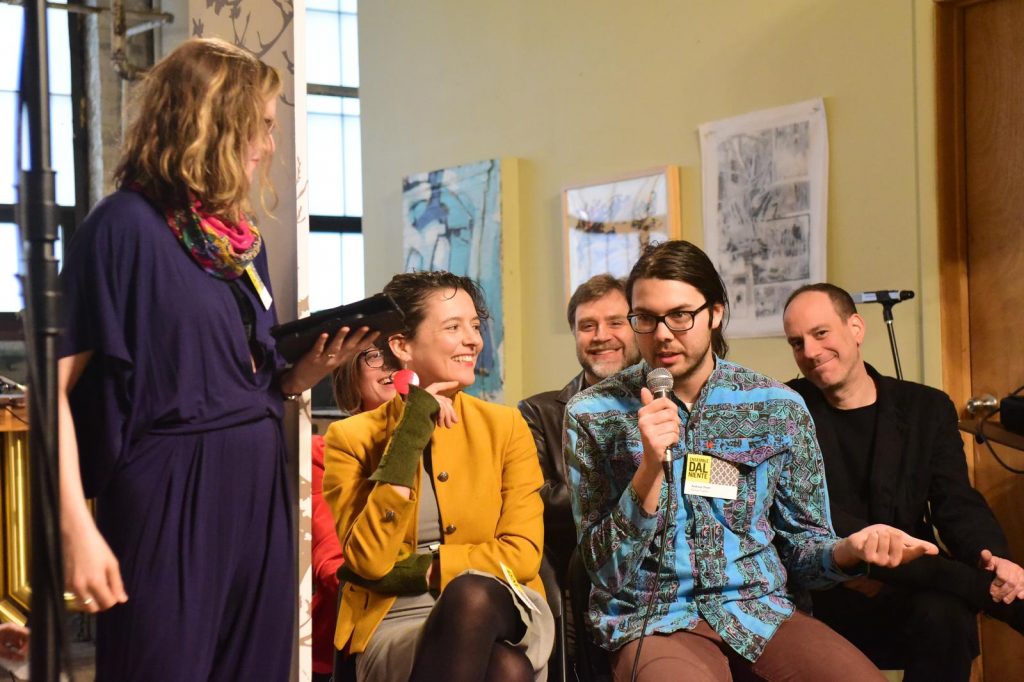 oughly excited to be looking ahead to next year. PARTY 2017, which we are in the initial planning stages of at the moment, will include a huge world premiere from Joshua Fineberg – a piece that promises a collectively immersive experience. Our season will include another Hard Music, Hard Liquor concert, for which I we are very excited to be working with Murat Colak on an ambitious multi-sensory project.  Reinstated for next season, our Proximity concert series, in which we invite a composer to Chicago to curate a program of their choosing, will feature Enno Poppe who will also be conducting the ensemble. For a full lineup of next season’s offerings, please visit www.dalniente.com.