Earlier this year, the Eastman School of Music’s Paul R. Judy Center for Innovation & Research, in collaboration with the University of Michigan School of Music, Theatre & Dance’s EXCEL Lab, sponsored Disruption. Action. Change. Creating a More Just and Equitable Arts Ecosystem. As part of the series, our five featured guests contributed blog posts that coincided with their virtual sessions. In the coming months we will be revisiting our guests’ timely and compelling blog posts. This week, our Blog Rewind feature Joel Thompson. 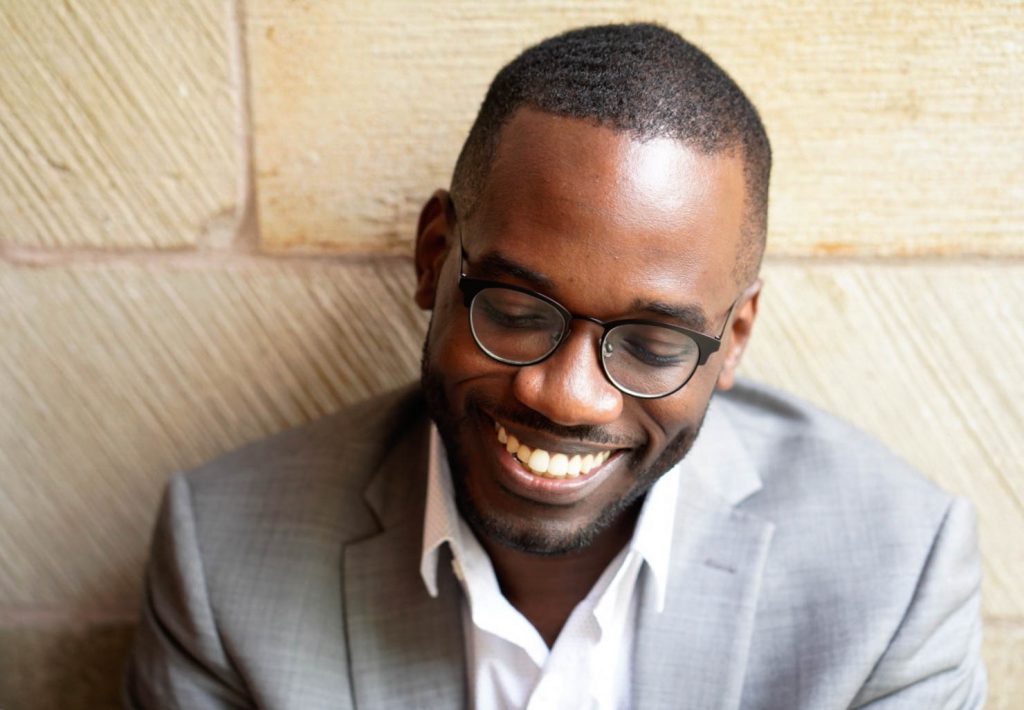 Joel is an Atlanta-based composer, conductor, and educator, best known for the choral work, Seven Last Words of the Unarmed, which won the 2018 American Prize for Choral Composition. Currently a doctoral student at the Yale School of Music, Thompson was also a 2017 post-graduate fellow in Arizona State University’s Projecting All Voices Initiative and a composition fellow at the 2017 Aspen Music Festival and School, where he studied with composers Stephen Hartke and Christopher Theofanidis and won the 2017 Hermitage Prize. His opera, The Snowy Day, based on the book by Ezra Jack Keats, will premiere December 2021 at the Houston Grand Opera.

The exterior of the building looked unassuming – brick, one-story, yet still huge, like everything in Texas – but the inside was a resplendent treasure trove…like a secret dragon-guarded cave in a Tolkien novel. My old library in the Bahamas kept all the children’s books at the top of a mostly windowless non-airconditioned tower, which was coated in a benevolent Pepto-Bismol pink to hide the fact that it used to be a jail in colonial times. Still, it served as my time machine to centuries past and my Scotty-less transporter to foreign lands and magical wonders…like the Hennington-Alief Library, in which I now stood.

She must have seen the awe on my face in response to the expansive YA section. Or maybe she saw the undisguisable glee inspired by the new knowledge that I could check out more than two books at a time. In fact, they had those little baskets that you saw at the grocery store! I had already purposed to fill mine to the brim when she approached with that endearing Texas lilt. “Hey there! What’s your name, darlin’?” Bashfully, I said my name as I’ve always said it and as my parents said it. “Oh, you mean, Johl.” She smiled. “Can I help you with anything, Johl?”

When I came to the U.S., I possessed a distinct amalgam of the Bahamian and Jamaican accents. My name-changing encounter with Smaug the librarian was one of many steps in the attempted erasure of the natural rhythms and inflections of my speech. Also, sixth-grade Joel didn’t want to stand out as a target for ridicule, so the voice with which I currently speak was born. In the 20-plus years since then, I’ve been told that my accent is not “American,” but not able to be placed anywhere else really. Many times, I’ve also registered surprise on the faces of people who assumed I wasn’t Black after only interacting on the phone. I’d like to think the Texan librarian didn’t intend to do any damage. I guess she simply said my name the way she thought it was supposed to be said, but her choice has continually reminded me how fervently I must protect my voice. The ease and audacity with which she attempted to change my name, the avatar of my identity, to fit within a box for her comfort has always baffled me. I’d like to think that if she and her hypothetical son, Joel, went to Jamaica or even to the pink library tower in the Bahamas, that no one would tell her son his name was actually JO-ell when he introduced himself as “Johl.” However, when I take a step back, I realize that this country was founded with that same audacity – to steal the land, massacre its indigenous inhabitants, and name it the United States of America.

Today, as a composer in dialogue with the legacy of Western European art music, I have found that holding true to my name, to my voice, to my identity is a most disruptive act. Striving towards honesty in my music, centering Blackness, and holding the door open for Black and other marginalized voices in this space are disruptive acts. These acts of disruption are rooted in an unquenchable love for this music and the joy of making it. However, I continue to ask, “Why is this disruptive?” and “What am I disrupting?” The potential answers, as they relate to the genre of classical music, are downright depressing. They show me that disruption is not enough – disruption must be the catalyst for transformation.

I look forward to conversing with the amazing Garrett McQueen during the Disruption Action Change Symposium, and I hope to learn more about how we can continue to invest in the transformation of this artistic field and how we can continue to our artistic practices with the hope that we can be models for fundamental social change in the real world – a world in which my future children and grandchildren will be able to borrow books without casual threats to their identity, a world in which they’ll be able to create in any field without fear of being pigeonholed or dismissed, a world where they don’t have to change or hide their voices to remain safe, a world where they don’t have to worry about being killed extrajudicially because of their exterior, ignoring the treasure trove contained within. Until then…