Quince Contemporary Vocal Ensemble’s Season Closer Concert for the 2014-15 season: Spatial Palettes took place on Sunday, May 17, 2015 at 8:30pm at Constellation Chicago. We commissioned 3 new pieces with the generous support of The Paul R. Judy Center for Applied Research. One from Monte Weber, another from Levy Lorenzo, and another from Eliza Brown, all very talented and forward-thinking composers that were intrigued by the idea of writing a piece based on space rather than an instrument or instruments. 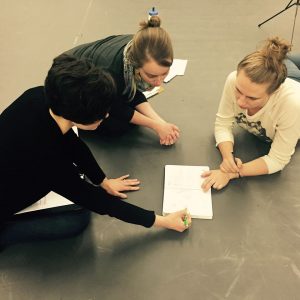 Upon getting all the scores in for this season closer concert, we were a little nervous about what to expect. Using the space as a sort of ‘5th member’ is an exciting idea, but we weren’t exactly sure how it would play out since we hadn’t seen the scores yet.
Eliza Brown’s piece was written specifically for us AND the Constellation Chicago space, using the history and function of the venue as a jumping off point. When we received her score early this year, we talked so much about how to convey each voice and character in relation to the space. On top of that, it was a huge challenge to convey the character because there was no actual text or lyrics.
Eliza’s piece uses nonsense syllables and extended techniques versus an actual language. We had some trouble envisioning how this would visually and aurally work and came to the conclusion that it needed to be staged by a stage director as well as memorized. 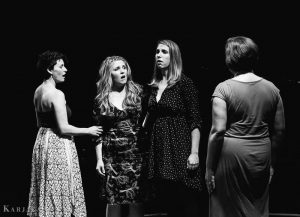 That’s where Emmi Hilger came in. With her keen eye for detail and extensive background in theatre and directing, she was able to guide us in the right direction, using the Constellation space as a ‘found space’ rather than a contrived one, we were able to make decisions about who our characters were and why they were in Constellation in the first place. We were able to decide destinations and focal points, and many other things we were finding difficult because we weren’t able to get outside of our own characters to see the larger picture. What is also so interesting about Eliza’s piece is that it can be tailored to any space that we perform in. So while the world premiere was from the perspectives of musicians/performers, our next performance could be as factory workers, or ice skaters; the possibilities are unlimited. 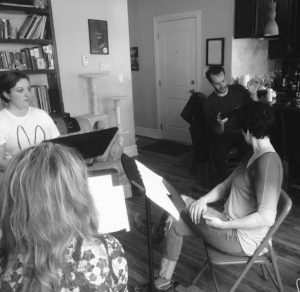 For Levy’s and Monte’s piece, their focus became more on the sonorous possibilities of a space. Levy created a smartphone app that you can manipulate with your mouth. It plays 5 different pitches in 2 different octaves. Using our voices and mouths, we were able to sing along with them and create beating or improvise a duet or change the pitches microtonally. It was exciting and unlike anything I’ve ever seen from an iPhone app or a composer! For Monte’s piece, he played around with overtone singing and displacement of speech and language and morse code in a piece that seemed to swirl around you no matter where you were in the venue.
It is now clear to Quince that unique pieces like Eliza’s, Levy’s, and Monte’s, which can be tailored to whatever space it is being performed in is quite an undertaking and needs many different perspectives from the musical world and also a theatre world and a composer world and an architecture world to ensure clarity and perspective. It’s a project we are more than ready to take on again.