Yale Symposium 2015: Music in the Schools 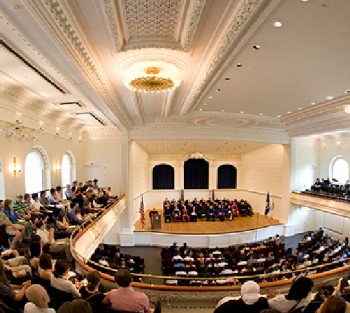 The Yale School of Music held its fifth Symposium on Music in the Schools on June 5 & 6, 2015 in New Haven to explore the role of music partnerships. Associate Dean Michael Yaffe invited Polyphonic to attend the opening day session on June 6th, to which New Haven public music school teachers were also invited. 39 partnership programs from across the country also participated, 25 (64%) of which involved a partnership with a symphony orchestra or opera company. The charge of the symposium was to consider ” Why” — to ensure that we have a strong case for the value of music education.

Associate Dean Michael Yaffe spoke about how the country seems to value music education less and less. Decades ago, music education existed everywhere, K – 12. Then in 1978, Proposition 13 was introduced in California. This proposition reduced property taxes so much that school districts had significant budget problems. They saw music as an extra and it was eliminated from the curriculum. There wasn’t much of a fight about it, and other states began to cut music as well. It happened on June 4th in Atlanta [Atlanta public schools canceled music in public elementary schools]. “We can’t continue to let this happen. In a past symposium, we talked about music as a child’s birthright, but the country doesn’t believe this now.”
Dean Yaffe went on to say that the charge of the symposium is “Why” – to ensure that we have a strong case for the value of music eduction. Partnerships with musical organizations are replacing public music education, but we have not made a compelling reason for why music is important to all children. We need to identify a compelling reason.
Sebastian Ruth
The first speaker was Sebastian Ruth, a musician and educator committed to exploring connections between the arts and social change. He is a Visiting Lecturer at Yale and the Founder and Artistic Director of Community MusicWorks, which connects professional musicians with urban youth and families in Providence, Rhode Island, where Mr. Ruth is a member of the Providence String Quartet.
Mr. Ruth’s talk was titled “Music, Education and Democracy.” He spoke at length about Maxine Greene. “She was an inspiration and a philosopher, focused on the transformational experiences that can come from the creative experience.”
How can music be a catalytic change for young people in a democracy? Ms. Greene espoused emancipatory pedagogy – “ two central principles for a renewed emancipatory pedagogy across educational contexts: the recognition of an essential equality between students and teachers, and a liberatory agency that uncovers and builds on students’ effectivity as beings against domination.” For Ms. Greene, this meant teaching for freedom, where students are free to realize their full potential, a freedom possible through the arts. In other words, students can experience personal, spiritual, and individual kinds of growth through studying music. In a democracy, you need people to feel that empowerment and have opportunities to grow. It’s not that you should grow into a definition that’s already out there, but you should grow into a definition that is yours.

Summary of Mr. Ruth’s thesis: Can the participation in music give young people a voice to participate fully in society? There are traditions, even in the last 100 years, of people who’ve said yes to that. The voice of artists is critical to the health of a society. John Dewey talks about how the artist sees truth in ways that no one else can. Artists can take in all sorts of data, amidst the chaos of daily life, and distill a meaning, more so than scientists and historians. The arts provide meaning for the lives of the people around them and for future generations.
Dewey’s ideas were put into practice as part of the New Deal and the WPA. It was a singular moment in our history – its agenda was to bring the country out of the Great Depression and put people back to work. It would have been an adequate response to put artists back to work building bridges, but instead, they started federal arts projects “because their voice is critical to the health of society.” Some of the iconic work from that time are the murals in Federal buildings. WPA orchestras played in school gyms. Studio artists like Jacob Lawrence depicted the African-American migration from the south to the north – it was biographical but also spoke the truth of emotional lies that were the complexities of that moment.
The Community Music Works was motivated by this notion – including young people from urban communities who otherwise don’t have access to arts training. Is training them in music enough to give them the confidence and voice to become full citizens of society? The answer is that it’s not automatic. It’s important that educators are critical of how they teach. If we say, “We’re not creating artists but we’re teaching a craft,” is this problematic?
Perspectives into arts learning: think about the process of education as a mutual discovery and a respect for individuality. It’s a practice of collaboration and democratic practice. If people are able to develop multiple perspectives and individualities, can we regard one another with respect about those differences?
QA Session

The second speaker was Joanne Lipman, who serves on the Board of Advisors of the Yale School of Music, was founding Editor in Chief of Conde Nast Portfolio magazine, and a former deputy managing editor of The Wall Street Journal. Her Wall Street Journal article in October 2014, “A Musical Fix for American Schools,” went viral. Her essay argues that music education can literally expand a child’s brain and can help improve academic performance, as well as persistence and diligence.
She went on to describe her book, Strings Attached: One Tough Teacher and the Gift of Great Expectations, co-written with Melanie Kupchynsky, which tells how music can help students reach success, regardless of what career they choose. Strings Attached is the story of her childhood music teacher who changed the lives of countless music students. It’s a love note to music education and teachers, and a rallying cry that music education is not a luxury but rather is a necessity.
It all began with an OpEd she wrote for the New York Times about the death of her childhood music teacher in New Jersey, Jerry Kupchynsky or Mr. K, as everyone called him.He was a Ukrainian immigrant orchestra conductor who was terrifying and so effective. She lost touch with him after high school as she began her career as a journalist.
“This is a man who made all the difference – who changed my life. I use the lessons I learned in his classroom every day – perseverance, focus, and resilience. I had to go back to my home town for the memorial concert.” At the service, she played with many other high school alums –40 years’ worth of former students who had flown in from all over the country with their old instruments. “All of them felt exactly as I did – we created a symphony orchestra the size of the New York Philharmonic.” Her piece in the Times went viral “because so many people also have someone like him in their past.” She reconnected with Mr. K’s daughter Melanie, a violinist with whom she’d played viola in a string quartet and who now is a member of the Chicago Symphony. They began emailing each other and ultimately collaborated on the book, Strings Attached.
So many of Jerry Kupchynsky’s students had gone on to find great success in other fields; there were many doctors, lawyers, college professors, and of course, lots of music teachers. Ms. Lipman started interviewing other successful people who had played an instrument as a child, and wrote “Is Music the Key to Success” for the New York Times.
Among the successful people she interviewed were Alan Greenspan, who studied clarinet at Juilliard and played in a jazz band. Chuck Todd, NBC’s chief White House correspondent, played French horn and was principal in the Florida all-state orchestra. Andrea Mitchell started as a child prodigy violinist and discovered broadcasting at UPenn while taking a break from her practice room (the campus broadcast studio was down the hall). Larry Page, a co-founder of Google, was a sax player and credits music with his idea for founding Google.
Ms. Lipman asked all these people if there is a connection between music training and success, and all said yes. All talked about the ideas of discipline, learning to work with others, playing in an ensemble, focus, attention to detail; music taught them how to listen, which is so rare now.
Her OpEd piece resonated well beyond musicians and music teachers to a larger audience. Many people understand the importance of music. But she wanted to understand the mechanism – what is it about music that translates into success? What is the connection between music studies and academic performance? She offered five findings:

The number 1 predictor for acceptance to medical school is not biology but rather is music. 1/3 of medical students are musicians. To quote a dean of a medical school, “If you’re a musician, you’ve got to listen, watch, and be very involved. This makes you a better doctor.”
Ms. Lipman concluded her talk by discussing music education. “It’s heartbreaking that music programs are being cut because they’re not core – we continue to face these issues. The Journal of Economics and Finance cited a music program in a large school district that costs 1.6% of the education budget; that’s $187 per student.
There are incredible success stories throughout the country. The three best practices in terms of music advocacy are:

Ms. Lipman is very optimistic about the future of classical music in this country. “We must raise our voices so the rest of the country understands that music education changes lives.”
QA Session

Breakout Sessions
The afternoon consisted of eight break-out sessions, with suggested topics from Sebastian Ruth and Joanne Lipman. Each group summarized their discussion for the whole group.
From the New Haven public school teachers:

From the Partner Groups: