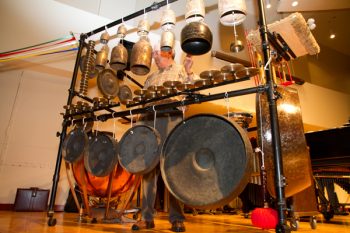 [This essay was originally written in 2004. It’s observations are essentially unchanged in 2011.] In the 20th century world of specialization, artists found their position in society as the purveyors of new possibilities through open and free thought – from Picasso and Stravinsky to Jackson Pollock and Karlheinz Stockhausen. Having broken away from the intellectual […]

[This essay was originally written in 2004. It’s observations are essentially unchanged in 2011.]

General public
-advocacy at all levels – the case for (value of) music & arts must be simply and clearly stated and repeated over and over.
-keep music & arts in the mix of ideas – when teaching, speaking, volunteering, voting
-organize coalitions – music and arts institutions must act cooperatively in advocating, lobbying, and seeking efficiencies of scale to deals with ever- increasing costs.
-teach listening/thinking skills
Career-track Musicians
-be informed about careers in music. Understand what skills are needed and how music careers must be funded. Ask tough questions (and then find answers.)
-balance technical skill acquisition with self observation (questioning, thinking)
-acquire advocacy skills
-realize that every artist is always a teacher, and that all art is educational – teaching us about ourselves and our relationship to others.

I have been a musician all my life and have never worked outside of music. Nevertheless, my time today is mainly spent on the computer – business emails, generating work, accounting, writing to others about what I do (publicity), composing music, and advocating for music.
As a professional musician, I have always loved performing and listening to music, but even though a career in music has been very satisfying for me, I don’t recommend it to students, unless they are fully aware (and most are) of the cultural environment (described above).The decision to devote one’s life to music is most fulfilling when driven as much by a love of listening to music as by a love of playing an instrument. In order for most professional musicians to have a satisfying career in music, the love of music must be strong enough to compensate for relatively modest pay and a marketplace that is increasingly uneducated in music.
The distinguished American composer and educator, Howard Hanson, said that wherever he went he was approached by students asking if they should go into music, and he always told them ‘no,’ regardless of who was asking. He said that the ones who eventually became musicians didn’t listen to his answer.
Bill Cahn has been a member of the NEXUS percussion group since 1971, and was Principal Percussionist in the Rochester Philharmonic Orchestra from 1968 to 1995. He is now Associate Professor of Percussion at the Eastman School of Music and a visiting artist in residence at the Showa Academy of Music in Kawasaki, Japan.
Bill has performed with many orchestras, composers, ensembles, and artists representing diverse musical styles, including the Boston Symphony, the Chicago Symphony, the New York Philharmonic, Chet Atkins,John Cage,Aaron Copland, Chuck Mangione, Mitch Miller, Steve Reich, Doc Severensen, Leopold Stokowski, Igor Stravinsky, Edgar Varese and Paul Winter. He has conducted programs with symphony orchestras, and his compositions for solo percussion, percussion ensemble and percussion with orchestra/band are widely performed.His fourth book, “Creative Music Making,” on freeform improvisation was published by Routledge Books in 2005. In 2006 Bill received a Grammy Award as part of the Paul Winter Consort on the DVD titled, “2004 Solstice Concert”.
From 1995 to 2004 Bill served on the Board of Directors forthe Rochester Philharmonic Orchestra and he was Chairman of the orchestra’s Education and Outreach Committee.He currently serves on the RPO Honorary Board.