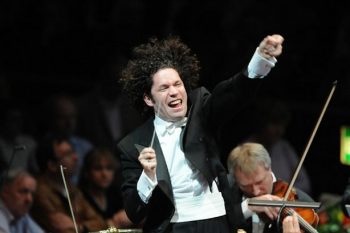 Dudamel. He’s a name which virtually every classical musician is pretty familiar with these days. But only a couple of years ago, Dudamel was not so much of a household name. And if you don’t know who he is, Gustavo Dudamel is the young, exciting conductor of the Los Angeles Philharmonic. In this article, Brittney Stanton, who is a flautist and graduate student at Arizona State University, chronicles her experience at a concert given by the Los Angeles Philharmonic with Gustavo Dudamel conducting, as part of their nationwide tour of 2010. Also contributing to this article is Timothy McAllister, saxophonist, who was performing with the orchestra in this concert and additional concerts as part of their tour. We know that the orchestra received all kinds of different reviews on their tour throughout the country. Some critics loved the orchestra and some didn’t. But I think what we can agree upon is that Dudamel really brings an excitement and energy to classical music that really bodes well for the future.