Empty Seats – What Can We Do? 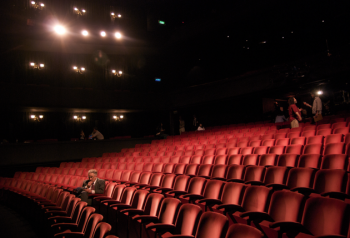 Looking out at the audience during a performance and seeing lots of empty seats is a disheartening experience for any orchestral player. We’ve all heard that old adage about “the graying audience members,” but is it really so? Is there anything we as musicians can do to reverse this trend?
Tina Ward, a clarinetist with the Saint Louis Symphony, has been very active in her own orchestra as ICSOM delegate and has served on many orchestra committees. She was also an American Symphony Orchestra League (ASOL) Orchestra Management Fellow, which gives her a unique perspective on many aspects of orchestra life.
Tina offers her thoughts on what we musicians can do to improve the concert experience for the audience, in terms of employing audio-visual elements, making the concert more exciting for the audience, and enhancing the concert experience as a social event. Her lists of action items for orchestra musicians should instigate some lively conversations among your colleagues!

One evening last fall I was in the musicians’ lounge, awaiting the beginning of the evening Pops show and reading the memo from my box. The Pops, a magic show, was quite entertaining to me. All sorts of things were disappearing and appearing throughout the evening. The music behind the show was fun to play and of a meatier quality than many Pops shows. Unfortunately the memo, regarding attendance figures and total ticket sales, was not as pleasing to me. Although the hall often appeared only half full to me, the symphony’s ticket revenue was ahead of comparable sales last year. I interpreted that to mean that, although fewer people are attending our symphony orchestra concerts this year than last, we’ve managed to raise our ticket prices enough to make up the difference. I was not impressed. The fact that revenues were up has not stopped my concern about the vast number of empty seats that I see all too often as I look out into the audience.
For years I have pondered the question, “Is there anything that we, the musicians, could do to increase attendance?” I believe there are many things that we can do. My purpose in writing this article is to encourage every musician to look at what s/he can do so that the symphony as an art form continues to flourish in this new century. There has often been a belief that if we marketed better, had better conductors, etc., that all would be well. While it is always theoretically possible to do something better, perhaps doing the old things better is neither humanly possible given available resources nor the only route to salvation. I ask all musicians to consider with open minds what other changes we might make so that symphony orchestra concerts remain economically viable and artistically fulfilling and joyful.
With current audio equipment I can sit comfortably at home and listen to a CD that reproduces the sound of a concert. Not only that, but I can listen as many times as I would like for no additional cost. Why should I bother to go to a concert unless it offers me more than just an aural experience? There are at least three aspects of the live concert that go beyond the experience of merely listening:

A Concert Is an Audio-Visual Event

In public speaking it is common knowledge[i] that nonverbal communication accounts for most of a speaker’s message. The percentages usually referred to are: 55% for gestures, expressions, and movements; 38% for vocal qualities; and 7% for actual words. If we apply this concept to a symphony performance, over half of the overall effect is visual! In thinking back upon my musical training, the vast majority of emphasis was placed on the notes, and next upon the overall sound quality and expression; almost nothing was said about visual presentation. This emphasis is exactly the reverse of what the public speaking research indicates to be the order of importance.
During the past few years I have been attending concerts rather than performing them.[ii] Not only did I observe orchestras playing, but also I listened to intermission audience conversations (that is, I eavesdropped). Additionally I attended an audience focus group and listened to many discussions about audience comments. From this I know that the audience does observe what is happening on stage in detail. They enjoy watching musicians who are visibly engrossed in their music making. They wonder why so many musicians appear to be uninterested, bored and unhappy.
Now that I am back to performing, I realize how unaware of the audience and of visual presentation I tend to be while I am on stage. I think there are many reasons why I, and perhaps most musicians, have minimized awareness of the audience. To list just a few:

A Concert Is a Unique, Exciting Event

Although most orchestras present many concerts a year, each concert is unique and can never be truly duplicated. It is the spontaneity, atmosphere, and excitement that, for me, set live music apart from recordings and create a truly unique, special, and magical event. A concert is a one-of-a-kind, totally handmade product.[iv]
We all seem to intuitively know when a special energy permeates a concert. The audience spontaneously and energetically responds. I tend to feel “up,” energized and happy, even though I may be physically fatigued.
All too often I feel it is exclusively up to the conductor to create this special atmosphere. After all, it is s/he who creates the overall shape to the composer’s score and is in the position to inspire or squelch my creativity and engagement. There are ways that we can encourage the excitement and creativity of live performance.

A Concert Is a Social Event

The audience is a group of individuals who interact with each other before, during and after a concert. Most people prefer attending with someone they know. Some people attend more for social reasons than for the music. Symphony Development departments have capitalized on the social aspects of a concert and have created rooms where higher level donors can go before the concert and during intermission. Social interaction is a human need – one that the best audio system cannot fill.

It is time for us to take action. At the very least we should be discussing, creating, encouraging, and participating in innovative strategies. Audience development is no longer something management can do alone. We can be a significant force in this process. Let my list be just the beginning of new efforts by musicians and the entire orchestra family working together to fill halls to capacity for every concert.

[i] Malcom Kushner, Public Speaking for Dummies®, p. 243.
[ii] For almost three years I was physically disabled from playing. During that time I attended concerts in several cities. Also I participated in a retreat where I heard Board members, management staff, conductors, and musicians frankly discuss problems of symphony orchestras related to audience attendance.
[iii] At least two American orchestras, Baltimore Symphony Orchestra and The Houston Symphony, have directed those players at the front of the stage to turn towards the audience during orchestra bows.
[iv] Analee Dorough, principal flutist in The Houston Symphony, used the description of a concert as handmade in a pre-concert speech asking for annual fund donations.
[v] The former Music Director of the New Hampshire Music Festival would lead all the orchestra members out to the lobby at the end of the final concert of the summer season to greet the patrons, thank them for coming, and invite them back for next year’s season.
[vi] After a St. Louis Symphony Pops concert with the juggling Flying Karamazov Brothers, all the performers came out to the front of the stage to talk with interested audience members and sign autographs.