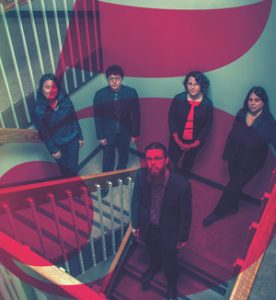 fivebyfive, a non-traditional, artist-run quintet of flute, clarinet, electric guitar, bass, and piano, commissioned four established and emerging composers to create new works engaging with and inspired by the lush, rich colors and patterns found in the stained glass work of Judith Schaechter for a multi-project venture titled “Glass Works”. In the first project of this venture fivebyfive and the Memorial Art Gallery will host each composer for an innovative “Meet the Composer” Open Rehearsal-Concert among the artwork.
Judith Schaechter has explored and pushed the limits of the stained-glass medium for over 35 years. Her singular, subversive, and masterful approach has altered the landscape of contemporary American art. fivebyfive will work with composers Edie Hill, Jung Sun Kang, Andrea Mazzariello, and Jonathan Russell who will each write four different works using Judith Schaechter’s “The Battle of Carnival and Lent” as inspiration. fivebyfive believes that connecting the collaborative spirit of modern chamber music with the work of Judith Schaechter provides an atmosphere that encourages one to be deeply immersed in an enhanced sensory experience, engaging audiences in creative and wonderfully unexpected ways.
Scheduled September 15, 2019 for Jonathan Russell, October 27 for Edie Hill, November 10 for Jung Sun Kang and December 8 for Andrea Mazzariello, these intimate performances will allow audiences to see a piece of music in progress and to interact with the composers as changes are being made in real time. Audience members will get to converse one on one with the composers and performers offering questions and reactions. Not only are these new Open Rehearsal-Concerts designed for engaging educational performances, but also they will be an integral part of fivebyfive’s overall marketing strategy. 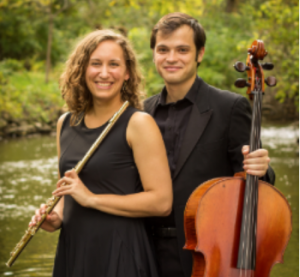 Music in the American Wild, directed by Emlyn Johnson (Eastman BM ’08, DMA ’15) and Daniel Ketter (Eastman BM ’10, DMA ‘17), is an artist-run performing ensemble dedicated to community-oriented new music. The innovation of Music in the American Wild’s mission is that it serves a specified community with new music, seeking to celebrate the identity of the community in its own shared spaces.
In February 2020, the next chapter of the ensemble’s Music in the American Wild initiative will bring awareness to endangered Hawaiian flora and fauna through the innovative approach of performing new compositions by Hawaii resident composers alongside commentary by scientists and researchers. AWE will also commission Tonia Ko, Michael-Thomas Foumai, and Byron Yasui to write pieces inspired by Hawaiian wildlife, environments and traditions. AWE will premiere these works on a Hawaii tour with a twofold mission: raising awareness of endemic wildlife and conservation efforts, and sharing a high-quality musical experience with audiences. 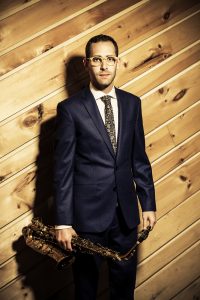 Rochester, N.Y.—The University of Rochester’s Eastman School of Music and ArtistShare® have announced that Eastman alumnus, saxophonist/composer Owen Broder, has been selected as the first Eastman/ArtistShare New Artist. Broder’s Heritage: American Roots Project is the first of three projects to be announced through the exclusive partnership of Eastman and ArtistShare, designed to recognize and support the career and artistic development of exceptional Eastman students and alumni.

Broder’s American Roots Project integrates two American traditions – American roots music and jazz – in a full-length album titled Heritage. The repertoire will feature original and re-imagined works by five of the leading arrangers/composers in contemporary improvised music, including Bill Holman, Jim McNeely, Ryan Truesdell, Miho Mazama, and Broder. Each of the eight new compositions will be inspired by the rich heritage of traditional folk music that is distinctly American, crossing numerous forms (bluegrass, gospel, blues, and others).

Two additional Eastman/ArtistShare artist projects will be launched over the coming weeks, including Music in the American Wild (Daniel Ketter and Emlyn Johnson) and hybrid: electro-acoustic experience (Cameron Leach).