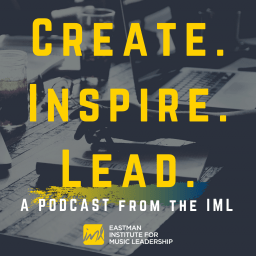 Click here to listen to this episode on our new SoundCloud Page!

Episode 5: Invent. Reinvent. Rinse. Repeat.
This short-form episode is a conversation between IML student worker Frances Inzenhofer and her double-bass professor James VanDemark. Frances asks her teacher some big questions from how to choose the right path, what are some fundamental truths of a musician, the role of the artist in society, and the importance of being kind. James VanDemark shares his thoughtful responses and draws you in with his clear, well-spoken, well-articulated ideas.

James also has quite the bio – from dropping out of high school to take his first orchestra job, to landing his faculty position at Eastman as a 23-year-old, to creating and narrating a grown up version of Peter and the Wolf. Do yourself a favor and read his bio here.

The Seven Pillars of Wisdom by T.E. Lawrence
My Cat Yugoslavia by Pajtim Statovci
Lord of the Rings by J.R.R. Tolkein (He re-reads every few years or so!)
A Gentleman in Moscow by Amor Towles
The Shadow of the Wind by Carlos Ruiz Zafrón
The Island at the Center of the World and/or Amsterdam by Russell Shorto
Also, check out anything by Alan Furst, and he just finished a hilarious mystery novel by Walter Mosley who has a whole series of mystery novels.