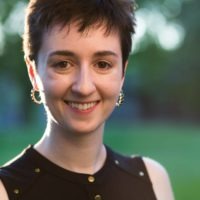 Colleen Bernstein is an adventurous musician pursuing her passions as an ambitious percussionist and enthusiastic arts educator. Based in New York City, she is an internationally touring performer of contemporary solo and chamber music, and also works as a concert presenter, producer, pianist, and conductor. Colleen strives to embody boldness and empathy through her work, and is dedicated to unifying and effecting positive change in communities of all ages and backgrounds.

Colleen has been featured in performances with GRAMMY-winners including Béla Fleck and members of the Silkroad Ensemble. She received 2nd place in the Black Swamp Solo Showcase and 3rd place in the MalletLab International Competition in 2018, and won the Ludwig Albert Talent Prize at the 2015 Universal Marimba Competition, held in Sint-Truiden, Belgium. In 2019, she performed at the Lucerne Festival in Switzerland and participated in the ground-breaking Ensemble Evolution program at the Banff Centre (Canada). Colleen has also been featured as a performer at the Leigh Howard Stevens Marimba Seminar and on the New York Philharmonic’s “Off the Grid” concert series. Currently, Colleen performs and teaches actively with the American Wild Ensemble and Creative Leaps International. In 2020, she became the leader for the Professional Opportunities subcommittee of the PAS Diversity Alliance.

Colleen is the Founder and Artistic Director of Strength & Sensitivity, a touring, multimedia performance project and collaborative platform that blends percussion music, poetry, and audience interaction to catalyze dialogue about gender equality and empathy. The inaugural S&S show, in March 2018, featured over twenty artists performing seven world premieres alongside improvisations and existing pieces by powerhouse composers and writers. It was presented in support of HeForShe Arts Week 2018, a global festival celebrating the solidarity efforts of the United Nations initiative. Strength & Sensitivity is dedicated to presenting innovative performances that are customized to feature the voices and perspectives of local artists within the framework of an evocative, inclusive program.

As a certified K-12 educator (NY), Colleen has extensive experience working in traditional school settings, as well as designing community development projects that meaningfully engage audiences in music learning. She is the Community Engagement Coordinator/Architect for the Silkroad Ensemble’s Global Musician Workshop, where she designs and implements a robust program of outreach concerts and educational sessions as part of the annual festival. In addition, Colleen has served as a Lead Teacher, Site Coordinator, and Faculty Mentor for two El Sistema-inspired organizations in Ann Arbor and Detroit, MI. From 2013-2016, Colleen was an Artistic Collaborator at the Strong National Museum of Play, where she designed, curated, and presented a series of educational programs, connecting contemporary music to the museum's exhibits through performances, discussions, and hands-on learning activities.

Colleen graduated from the Eastman School of Music with degrees in Percussion Performance and Music Education, as well as the Catherine Filene Shouse Arts Leadership Certificate and the prestigious Performer's Certificate. There, she studied primarily with Michael Burritt and performed regularly with the school's contemporary music ensembles, Musica Nova and OSSIA, as well as the Philharmonia and the Wind, New Jazz, and Percussion Ensembles. She received two Master's degrees in Percussion Performance and Chamber Music at the University of Michigan in 2019, where she studied primarily with Joseph Gramley. Colleen was honored to receive the Willis Patterson Diversity Award in recognition of her creative work contributing to building an inclusive and diverse campus community at U of M. She is a proud artist endorser for Malletech and Black Swamp Percussion.

Past events by Colleen Bernstein: