Do you have an exciting project or update you would like to share with the ALP Community? Keep us in the loop and submit your information to be included in the ALP Alumni Newsletter!

ALP in the Spotlight 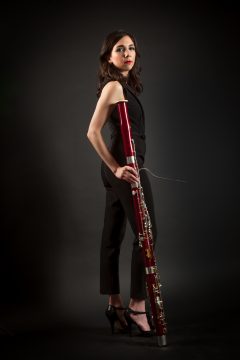 Brittany Harrington-Smith is an active performer, life and professional coach, and a fitness consultant. She received her Performer’s Diploma and Master of Music degree in Bassoon Performance at Southern Methodist University Meadows School of the Arts, her Bachelor of Music degree with high honors at the Eastman School of Music, and was a member of the Catherine Filene Shouse Chapter of the Arts Leadership Program. She is also a graduate of Professional Coaching from the International Coaching Federation accredited school – InviteChange. Brittany is also a founding member of The Breaking Winds Bassoon Quartet; an innovative chamber ensemble that pushes the limits of creativity and entertainment in instrumental music. Their repertoire disregards genre, with favorites from the worlds of classical, pop, jazz, soundtrack, and folk music adapted for the ensemble by its members. Known for their stage antics, the BWBQ use choreography, accessory instruments, props, and skits to add theatrical elements to their performances. The ensemble’s mission is threefold: to navigate the intersection of classical music, pop culture, and comedy, to expand the scope of bassoon performance, and to create meaningful bonds with audiences. Brittany keeps an active schedule as a coach in both the professional and fitness realms, a consultant, and member of the BWBQ.
Read more

See what ALP alumni are doing all over the globe. Go to the map

ALP at 20 Years
We celebrated 20 years of ALP in October 2017! ALP alums were featured throughout the weekend’s events, including late night jam sessions and a brunch where we considered redefining the programs that will keep leadership at the forefront of the Eastman experience. Thanks to those ALP alumni who were able to join us! LEARN MORE >

JOIN US ON FACEBOOK!
Are you an ALP alum? Then join the ALP facebook closed group and take advantage of career and networking opportunities. 300 Members strong!